Hollywood celebrities are not buying Trump's claims that he was taking hydroxychloroquine to fight Coronavirus. 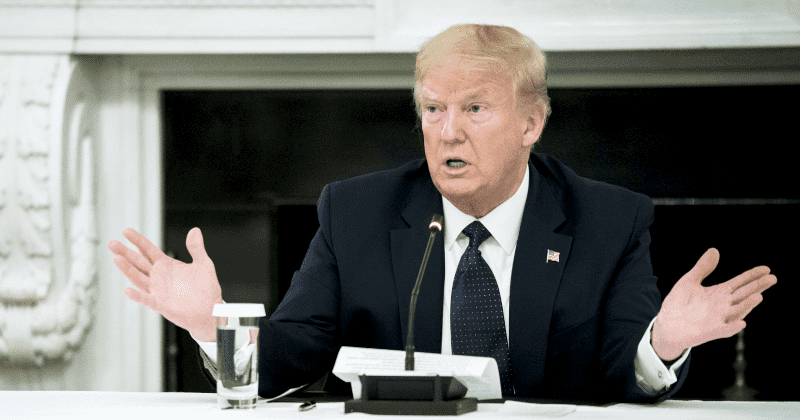 Hollywood stars hit out at the President for claiming that he was taking hydroxychloroquine to fight Coronavirus at a press conference recently. Barbara Streisand, Mia Farrow, and George Takei and Bette Midler were some of the prominent faces that called out the President for pushing an unapproved drug. Some of them hinted that Donald Trump was making money by pushing the drug because he allegedly has a stake in pharmaceutical giant Sanofi, the company that manufactures hydroxychloroquine. FDA had stated that hydroxychloroquine was only approved for treating malaria, lupus, and rheumatoid arthritis. Trump has constantly pushed the drug, claiming it is a gamechanger. This week he went as far as to claim he had taken the drug as a preventive measure.

Bette Midler, a vocal critic of the President didn't hold back, arguing that the drug was completely ineffective. "The president says he’s taking hydroxychloroquine to protect himself from Coronavirus, even though it’s been shown to be completely ineffective. Side effects are paranoia, hallucinations, and psychosis. I guess he’s been taking it for years!" said Bette Midler. Comedian Chelsea Handler labeled the President stupid. She tweeted: Trump taking hydroxychloroquine when he doesn’t have Coronavirus is so stupid. A better idea would be for him to swallow a bottle of the Clorox he recommended. Can we do that??? Rob Reiner, the director of Harry Met Sally, pulled no punches as he laid into the President over his handling of the Coronavirus. He tweeted: Dr. Trump’s prescription for fighting Coronavirus: Daily dose of hydroxychloroquine washed down with a cup of bleach. He’s not only a fucking moron, he’s a deadly one."

Barbara Streisand didn't buy the President's claim that he was taking the drug and added that he was just looking to make money off of it. Streisand tweeted: Trump says he’s now taking hydroxychloroquine. He might be lying but could it be because he has a small stake in the company Sanofi who owns it? That’s according to Forbes this past April. Actor Mia Farrow also echoed Barbara Streisand's thoughts and said no doctor would recommend the drug to the President. "I dont believe Trump’s claim that he is taking hydroxychloroquine. What doctor would prescribe it for an older, obese guy with a heart problem? It is ineffective in preventing coronavirus and increases the rate of cardiac arrhythmia. My question is: why is he pushing it?" wrote Mia Farrow.

It is clear. The President of the United States is a pathologically lying sociopathic criminal. His narcissism and abject stupidity will cause well over 100,000 Americans to die. He doesn’t care. We do. On Nov.3 we save Democracy & take him out in a landslide.

PRETENDING U KNOW WHAT YOUR DOING?? CANT BELIEVE U WOULD INSULT OUR CLASSIC FILM THIS WAY! BUT HEY! TYPICAL POS BEHAVIOR! U NEVER HAD THE LEADERSHIP OR COURAGE TO DO THIS ROLE! NEVER! 😡👎🏾👎🏾 https://t.co/OBjdRftYSx

Star Trek actor George Takei said there was no telling what Trump would do next and said he might drink bleach like he has suggested a few weeks back."Well, if he’s really taking hydroxychloroquine, maybe he’ll inject bleach next. Who knows with this guy," wrote Takei. The President had made a case for ingesting disinfectant as a cure for Coronavirus. "I see the disinfectant where it knocks it out in a minute,” said Trump. “One minute! And is there a way we can do something, by an injection inside or almost a cleaning? Because you see it gets in the lungs and it does a tremendous number on the lungs, so it’d be interesting to check that. So, that you’re going to have to use medical doctors with, but it sounds interesting to me,” he added.

Trump pushed for using hydroxychloroquine as a cure almost 2 months back when he said: "What do you have to lose? It's been out there for a long time. What do you have to lose?" Certainly not the approach you want to take when deciding on medicine. This week he made a case for the anti-malarial drug yet again. "You'd be surprised at how many people are taking it, especially the frontline workers before you catch it, the frontline workers, many, many are taking it. I happen to be taking it," said Trump this week. When asked if there was any evidence the drug was effective, Trump said, "Here's my evidence: I get a lot of positive calls about it," said Trump. I've heard a lot of good stories [about hydroxychloroquine] and if it's not good, I'll tell you right I'm not going to get hurt by it."

Fox News's Neil Cavuto is stunned by Trump's announcement that he's taking hydroxychloroquine: "If you are in a risky population here, and you are taking this as a preventative treatment ... it will kill you. I cannot stress enough. This will kill you." pic.twitter.com/e6D5alfAgc

Michael Rapaport, who often posts r-rated rants against Trump and the first lady posted an image of Trump next to a large bottle of bleach and wrote: This dumb f*ck might turn around and say he was being sarcastic about being on Hydroxychloroquine. Everything is on the table at this point with this dumb f*ck.