The actor said Donald Trump as President was worse than anything anyone could have imagined prior to his inauguration. 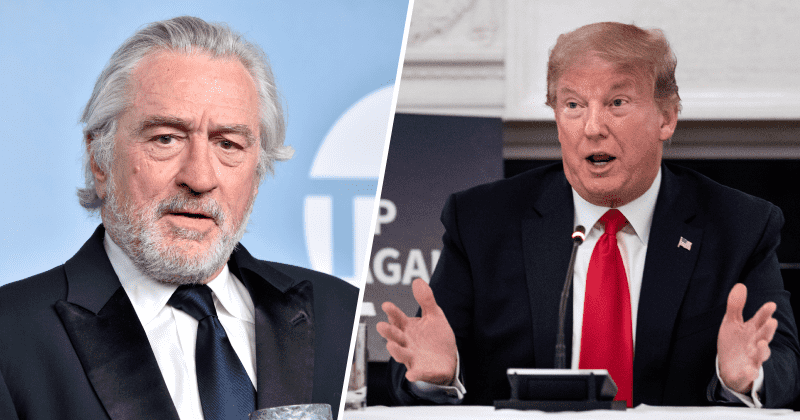 Actor Robert De Niro said he would love to see President Donald Trump go to jail. The Taxi driver said he knew Trump would be bad as the President of the United States but said "he's worse than we could ever imagine." De Niro also labeled Trump a sociopath with zero empathy for other human beings. De Niro was speaking about his role as disgraced investor Bernie Madoff in The Wizard of Lies when he said he hoped Trump would be jailed. Madoff had admitted to conducting an elaborate multi-billion-dollar Ponzi scheme and was sentenced to prison. De Niro said Trump doesn't deserve a platform to speak from, even in jail. “They didn’t allow much access the way I understand it to Madoff. With Trump when he’s in jail and that I am certainly looking forward to, when he’s in jail if they give him a platform there, he’ll never keep his mouth shut," said De Niro, reported MSNBC.

The Irishman actor made the comments on MSNBC’s ‘The Last Word’ on Thursday, June 11. “Madoff, for some reason, they stopped. I know people that interviewed him had very limited access to him. But with Trump, it will be—he’s another form of being,” said De Niro, before claiming that the President couldn't relate to another human being's pain. "When you look at Madoff and Trump, they both seem to have that sociopathic quality of zero empathy, no ability to see what it’s like to be somebody else.”

De Niro said he had given Trump a chance but he was worse than anyone could have predicted. “That’s what I realized right after he was elected when I was on Jimmy Kimmel. I said give him a chance, always give somebody the benefit of the doubt. But that was not the case. He’s been worse than any of us could have imagined, any of us could have imagined. It’s — there is something, you know, I don’t want to call him names. I’ve done all that. He’s worse than we could ever imagine. It’s beyond comprehension,” said De Niro.

Robert De Niro: “When a bully like that is allowed to make all these Republicans afraid of him … This is awful. You’ve got to stand up for the country, not for some crazy uncle that you have tolerate at a dinner party. This guy is the president." pic.twitter.com/5U8qaLXrsu

The actor also recently opened up about being ignorant about race until he started raising biracial kids. “My children are all half black and I don't have, even me, I take certain things for granted,” said De Niro, during a virtual appearance on ‘The Tonight Show Starring Jimmy Fallon’ amidst the protests that broke out after a black man was killed by a white Minneapolis cop on May 25. He said it was cruel that black people have to be extra careful to ensure they aren't killed by the cops. “When people say that they tell their kids, 'Keep your hands [out] when you're stopped by any cops, keep your hands on the steering wheel, don't make a sudden move, don't put your hands below, don't do this,' you understand that. That's scary. That has to change,” said the actor.

He also put the spotlight on the cops and said the system was crying out for change. “Anybody who hurts another person for no reason other than self-defense or the defense of other people around shouldn't be doing that job,” said De Niro. “I’m not a cop, so I don’t know the day-to-day stuff that they go through. But still, there has to be a change and people have to be trained and be more sensitive to certain things. Not that people aren’t many times, but there are still people who are not and that’s got to change.”