Old high school friends came to the rescue and did a wonderful deed for Ray Drake who has been paralyzed since 1989. 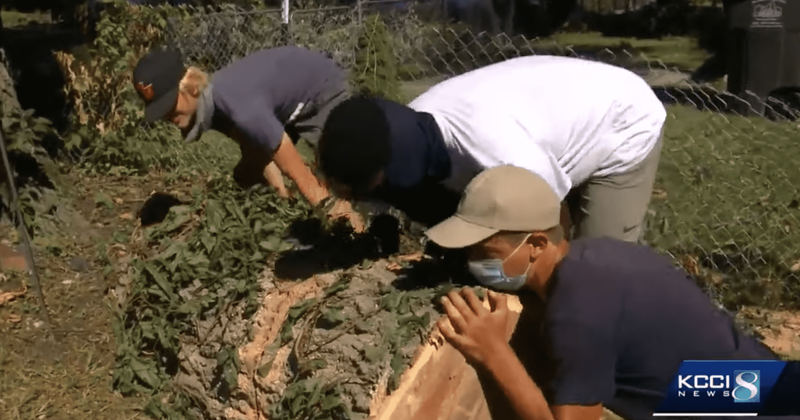 When the imminent threat of hurricanes and storms approaches a particular region, the people in the surrounding areas do anything they can to stay clear of it. The worst affected are those who live directly in the storm's path as they struggle to relocate to safer places. There have been many devastating incidents where people had to bear through all the rough storms that have shaken this country. A derecho struck one community in Iowa on Aug. 10 harsher than expected and the wreckage left homeowners picking up the pieces after the skies cleared.

Derechos are widespread, long-lasting wind storms that are usually accompanied by fast-moving and severe thunderstorms. They can cause hurricane-force winds, tornadoes, heavy rains, and even flash floods.

Hurricane Laura producing an unsurvivable storm surge in Texas and Louisiana. A catastrophic 800-mile derecho in Iowa and Illinois. Raging wildfires in California. No. The Green New Deal is not radical. Having a president in office who calls climate change a hoax—that's radical.

In Des Moines, Ray Drake had four trees on his property come down due to a derecho. Apart from that, he also lost at least part of a privacy fence that he had set up. Unfortunately, he was unable to join as several others headed out in the following days to haul off the debris. This is because Drake has been paralyzed since 1989 and has been in the care of his sisters ever since. His sister, Janice, noticed the damage that had been done on Drake's property and knew that they needed some timely help. Luckily, that help arrived in the form of Doug Applegate, who was one of Drake's old high school friends. Janice contacted him and he came over to see the extent of the work that would be needed.  “I saw some of the pictures and thought, ‘You need more than just one chainsaw, Janice,'" he told KCCI-TV.

So in order to do a fine job overall, he took the help of a nearby group of young men. The group was part of the Roosevelt High School football team and Doug knew he had some serious manpower on his side now. The student-athletes showed up, donned their gloves, and started to roll away sections of the trees as they were cut up. If the family sought the help of a business to do this work, they would have easily been charged hundreds, if not thousands, of dollars. The student team, much to their credit, finished the work in just two hours. “That’s just really what people in Iowa do, is we’re all friendly and help each other out,” Jackson Neary, one of the students, told WCCI. After the job was done, the team headed over to the house and met up with Drake, who was incredibly grateful for their help. “I’m blessed,” he said. “I’m blessed.”

Janice, meanwhile, extended her heartfelt thanks to the boys and teared up as she stood next to her paralyzed brother. Once the word of these young men's deeds got out, several readers online got encouraged by their acts. This is the sort of thing that truly promotes a sense of generosity and kindness in our society and paves the way to remedy the world's problems. “I know this family appreciated your help,” one wrote on KCCI reporter Eric Hanson’s share of the story. “Kindness is the understanding that we all struggle sometimes and can use a hand up, well done young ones blessings to you as you go on to your next adventures.”

“It’s been nice to see all the sports teams pitching in to help clean up in all the towns that were hit hard across the state,” another added. “It’s probably not what they had in mind for ‘conditioning’ but I’ll bet their hearts feel good for all they are doing. Great job to all the teams involved. “