Kuno is the 72nd recipient of the Dickin Medal since it was created in December 1943, during World War II. 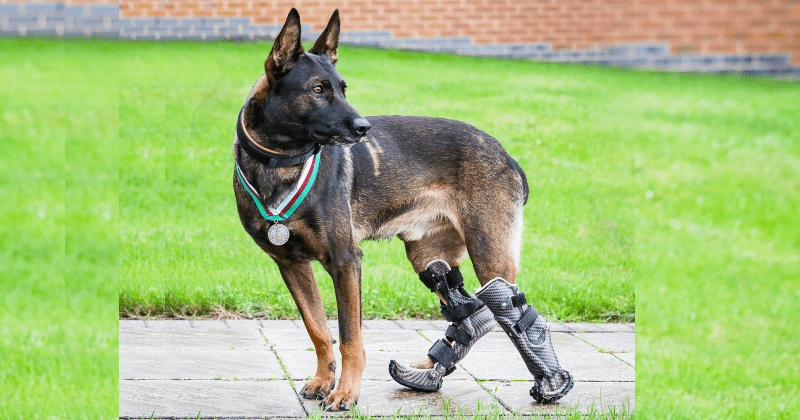 The retired British Army Working Dog Kuno has been awarded the Dickin Medal — the highest award any animal can receive within the British military. Kuno, a Belgian Malinois, risked his life as helped the British and Afghan troops in a tricky situation against Al Qaeda, saving countless lives in a 2019 operation in Afghanistan. However, Kuno lost both his hind legs in the operation. It was the People’s Dispensary for Sick Animals (PDSA) that awarded the heroic dog the honor. "Kuno is a true hero," said Jan McLoughlin of the PDSA veterinary charity in a statement. Kuno is the 72nd recipient of the Dickin Medal since it was created in December 1943, during World War II. Thirty-five dogs, 32 WW2 messenger pigeons, four horses, and one cat have received the honor to date, reported PEOPLE.

Kuno had been deployed to help the British troops to help their fight against the terror group. The British and Afghan troops were under attack facing a heavy barrage of grenades and machine-gun fire launched by an insurgent equipped with night vision goggles. The terrorists were hiding in a compound while firing at them. The troops felt helpless as any progressive movement towards the compound meant exposing themselves to gunfire and risking casualties. The troops felt it was right to risk Kuno to break the deadlock than to put themselves in the line of gunfire. It was now down to Kuno to help the troops make inroads into the building. Kuno was released by his handler and he sprinted through the compound's doorway to attack an insurgent guarding the entrance. The insurgent wasn't prepared for Kuno's sudden burst through the door and startled operative fired blankly into the darkness injuring Kuno in both hind legs.

Despite being hit on both legs, Kuno proceeded to press forward and threw himself at the gunman, biting his arm and pinning him to the ground. Kuno's actions paved way for the assault forces to enter the courtyard and clear the building. Kuno had also helped detect a stash of hidden explosives earlier in the raid. "His actions that day undoubtedly changed the course of a vital mission, saving multiple lives in the process. And despite serious, life-changing injuries, he performed his duty without faltering," said McLoughlin. "For this bravery and devotion to duty, we are honored to welcome him as the latest recipient of the PDSA Dickin." The location of the attack has been kept under wraps for security reasons.

Kuno was badly injured with his hind legs suffering serious damage; one bullet narrowly missed the main artery. Kuno was tended to by medics in the back of a helicopter but he still required several major operations before he could be safely transported to the UK. The medics were forced to amputate one of his rear paws to prevent possible life-threatening infection. Kuno has since made a full recovery with PDSA describing him as being "in good spirits and health." He also became the first UK Military Working Dog to have custom-made prosthetic limbs fitted. "I’m delighted that Kuno will receive the PDSA Dickin Medal," said British defense secretary Ben Wallace in a statement. "It is a testament to his training, tireless bravery, and devotion to duty which undoubtedly saved lives that day. I am very proud of the role our military working dogs play in operations at home and abroad. Kuno’s story reminds us of the lengths these animals go to keep us all safe." Kuno is now healthy and enjoying his retirement.