The police officer rushed to the aid of a distraught family after the baby was found nearly choking to death. 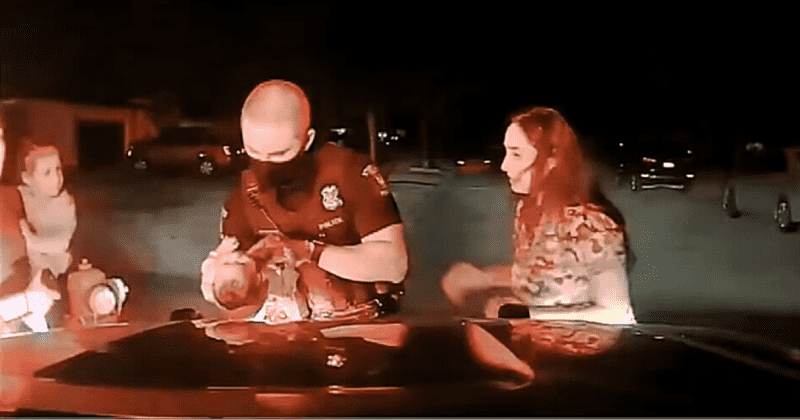 In incredible dashcam footage, a police officer can be seen saving a 3-week-old baby from choking to death as the baby's mother and family stood around with a concerned look on their faces. Cameron Maciejewski, an officer from the Sterling Heights Police Department in Michigan, can be seen dashing out of his patrol car and grabbing the baby from the wailing mother and doing back thrusts to rescue the girl seconds after she had lost consciousness while drinking milk, reports The Sun. Maciejewski kept his composure throughout the ordeal as he attempted to revive the baby while her distraught mother kept begging for help and moved around in a fit.

In the video released online, we see the officer bend over to lower the baby while offering back thrusts before saying: "He's crying, he's crying, he's okay." He then turns to the mother and says: "It's okay, he's crying, he's okay." Another police officer comes up into the picture as the mother collapses to the ground of shock and tiredness as a family member informs the officer the infant is a 'she'. "She?" Maciejewski can be heard saying before he continues: "Yeah, she's breathing. She was crying a minute ago." The four-minute and 30-second-video show the officer arriving at a home on the 36000 Block of Waltham Drive, and the family quickly approaching him upon his arrival.

When the officer arrives, he quickly asks: "Hey, what's going on with the baby?" as he sprinted to the family to take the baby. "Calm down, calm down, calm down... Let me see the baby," the officer said while never seeming to get fazed as he does the back rub maneuver. The hero cop is being lauded for the quick-footed action he took to save the life of an infant. In a statement on the incident provided on Facebook, the department wrote: "Upon pulling up to the home, the officer was rushed by the family who was holding their three-week-old baby girl, who was not breathing. Ofc. Maciejewski calmly takes the baby in his arms and performs back thrusts in attempts to clear the baby’s airway. When doing so, the baby coughs up the obstruction, and begins to cry."

Michigan Cop saves a three-week-old baby girl from choking death with quick, calm and trained response.
Support a cop, save a baby.
pic.twitter.com/WHRv32eqYR

Appreciating his good work, the department said: "If it wasn’t for Ofc. Maciejewski’s quick, calm, lifesaving actions, the outcome of this incident could have been tragically different. Not only did the officer save the baby, but the officer did an outstanding job consoling the family." The department also updated that the baby was handed over to Sterling Heights Fire Department who then took her to a local hospital. The video has gone viral of sorts since being posted on the social media site and has garnered over 5.7k likes so far with thousands of comments appreciating the cop's prompt work.

Jennifer Bergman Gonzalez wrote: "I just watched on the news. I had tears watching. I work with children and this just got me. You are a true hero. You were amazingly confident and calm through it all. Thank you SHPD and officer Maciejewski for serving our city." Rachel Phelan wrote: "What a great officer. He maintained his cool so well. I would be freaking out like the mother. Bless him for saving that baby's life!" Sammy Rayshouny: "Heck of a job. Couldn’t be more prouder!!! Please SHPD get me in touch with this officer. I’d like to award him for his heroic actions." Jamie Begarowicz wrote: "Man I felt the mother’s fear and anguish right through this video. What an amazing officer. Simply amazing. God Bless."

This video should be required viewing for all the dummies calling to "defund the police." It was absolutely terrifying and amazing and proves yet again, WE NEED OUR COPS. https://t.co/fjY2ww1meI