The incident occurred in Queensland, Australia where two children were playing in the back garden with the cat. 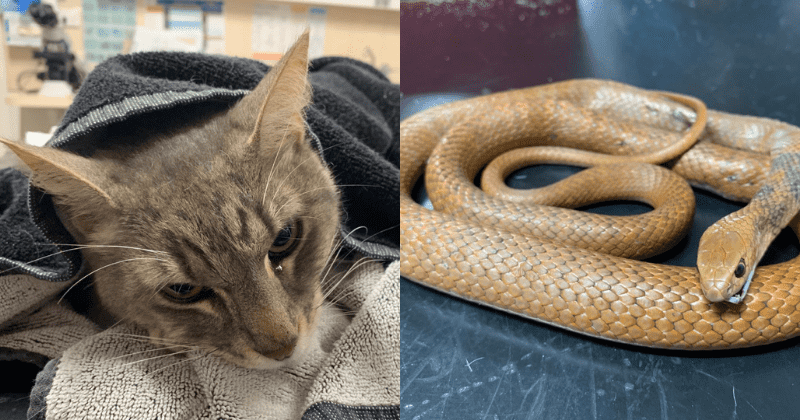 A pet cat is being hailed a hero after it bravely fought off a deadly snake and died later while protecting two children. The incident occurred in Queensland, Australia; two children were playing in the back garden with the cat and an eastern brown snake slithered dangerously close to them. Seeing the kids in danger, Arthur the cat jumped to action and took the snake down in a prolonged battle. However, in the process, the tabby was bitten, and he collapsed before recovering as though nothing had happened, reports Daily Mail.

Rest now best cat! You will be missed, but now have sprouted your angel wings!

When the family found him the next day, he had collapsed again and was unable to get up. They soon rushed him to Tanawha Hospital on the Sunshine Coast but it was too late for medical help as the venom had made its way into his organs and killed him. The owners are devastated by the loss of their hero feline who saved the lives of two children. Animal Emergency Service Queensland took to Facebook to express the grief the owners felt: "It was with the heaviest of hearts his owners had to leave Arthur after he gained his angel wings. His family ... remember him fondly and are forever grateful he saved the children’s lives. Arthur was always getting into mischief; he had previously visited us before having been in accidents and was very much loved by our team."

Staff at the facility also noted that the "collapse events" are a common occurrence after snake bites but not well known. As per National Geographic, the eastern brown snake the cat killed is one of Australia's deadliest, causing the death of more Australians than any other group of snakes. The serpent is known to be highly aggressive, agile, with a bad temper, and has the reputation for being the second most toxic land snake in the world. On the Facebook post, people expressed their sadness at Arthur's loss and wished him happy travails in heaven. Luke Kaploon wrote: "Sorry to hear that Arthur did not make it, seriously very sorry for the owners. As an indoor cat owner snakes are one of my fears even so because snakes can find their way inside the home. RIP Arthur, fly high and never fear anymore."

R. Clara Smith added: "Brave, wonderful boy! Your story of heroism and sacrifice has traveled the world - wishing you a speedy journey along the rainbow bridge and that your family may be comforted in your loss." Pets are usually very protective of their humans and often risk their own lives if it means keeping their owners unharmed. In a similar case we had reported earlier, a dog bravely took on a bear during a hike to save the lives of his canine friends and his human. Pete, an English Setter, and several other dogs were with Ben on a hike. The dogs reportedly spotted a bear and tried to scare him away but the beast wouldn't budge and instead planned to attack the group. That's when Pete engaged with the bear to buy enough time for the others to escape. By the time help arrived for the hero dog, it was already too late as he had already taken considerable damage during his valiant effort.

On Instagram, Ben wrote a heartfelt post about his beloved pet. He called Pete their "brave, old man" and added that the "dogs surprised a black bear just off the trail" In no time. the bear was nearly upon the entire family. "It must not have heard or smelled us with the pouring rain. It felt threatened and turned around." Pete stood his ground as his owner led the other dogs to safety.