Phoebe Has A 23-Year-Old Son And He Just Graduated: "A Little Crying"

"Happy proud HAPPY. And a little crying. By me not him," Kudrow captioned the post. 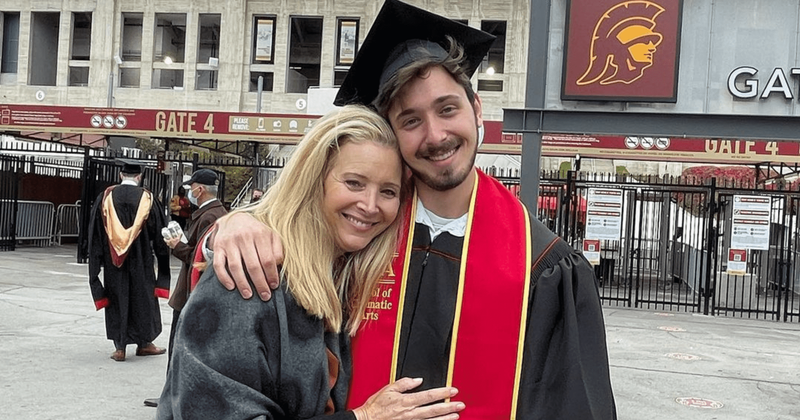 It's official! Lisa Kudrow's son is now a graduate! The F.R.I.E.N.D.S star's 23-year-old son Julian graduated from the University of Southern California on Sunday and Kudrow decided to celebrate the occasion with an endearing tribute on her Instagram. "Happy proud HAPPY. And a little crying. By me not him.. @juls_magewls," Kudrow captioned the post. In the picture, we see the 57-year-old hugging Julian, who is dressed in the ceremonial cap and gown, TODAY reports. Several of Kudrow's friends congratulated the new graduate in the comment section including Maria Shriver, who wrote: "🙌🙌🙌 I get it it’s going to be ok", while Lisa Rinna added: "Congrats!!!!! Ahhhhhh ❤️."

Julian is the only son of Kudrow and her husband Michel Stern whom she married in May 1995. In fact, she was pregnant with her son during the fourth season of F.R.I.E.N.D.S. and the scriptwriters decided to add the pregnancy into the show. Speaking about it in an interview with PEOPLE in 2018, Kudrow added: "The six of us would do a huddle backstage and just say, 'All right, have a good show, love you love you love you love you,' And when I was pregnant, then they would say, 'Have a great show, love you love you — love you, little Julian!' Cause we knew it was a boy and that was his name. So sweet, they included my little fetus in the huddle."

Earlier this month, on Julian's 23rd birthday, Kudrow shared screenshots of a FaceTime she had with him. Currently, Kudrow is eagerly awaiting the much-hyped F.R.I.E.N.D.S: The Reunion. In fact, the proud mama showed off during a recent appearance on Conan that her son helped out with the taping. "He was able to come to the reunion… and afterward, he came up to me and he said, 'Can I say that I'm really proud of you?' "she recalled. "That was one of the very emotional things that happened to me," the comedy star added. The much-anticipated reunion is set to stream exclusively on HBO Max on May 27 with the official friends' social media handles announcing that there will be several high-profile guests gracing the screen.

Some of the guests include soccer star and owner of MLS team Inter Miami CF, David Beckham, Justin Bieber, K-Pop group BTS, Cindy Crawford, James Corden, Lady Gaga, Cara Delavingne,  Kit Harrington, Elliot Gould, Tom Selleck, Reese Witherspoon, Maggie Wheeler, Mindy Kaling, Malala Yousafza, and several others. Considering the buzz the reunion is creating, analysts are predicting the event to be one of the most viewed properties on HBO Max. F.R.I.E.N.D.S is among the most loved TV series ever released. The show premiered on September 22, 1994, and had a 236-episode, 10-season run before coming to an end on May 6, 2004.