Hallmark Movie Features Lesbian Wedding For The First Time Ever

The network previously made a vow to increase LGBTQ+ visibility and they are delivering! 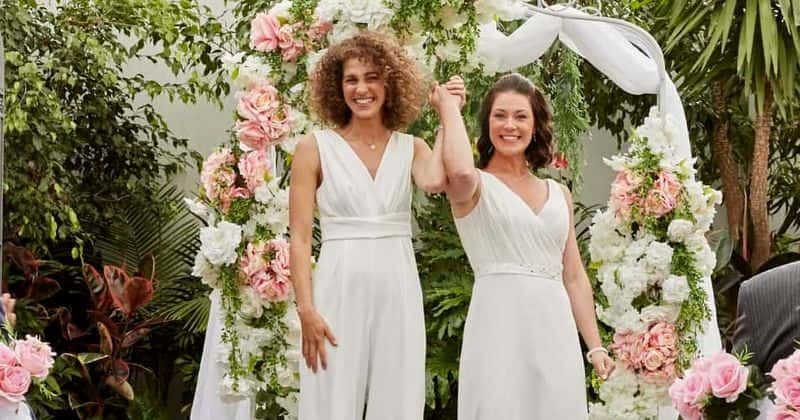 The Hallmark Channel recently featured a same-sex couple tying the knot in its new movie Wedding Every Weekend. This is another first for the cable channel. As we previously reported, the Hallmark Channel also made history with its first-holiday movie featuring an onscreen gay couple in The Christmas House. Now in another attempt to promote inclusivity and representation for the LGBTQ+ community they've featured a lesbian wedding as part of the movie. While the newlyweds were not the protagonists of the movie, the scene was appreciated by many users online. HAbbott4 tweeted: I’ve been watching Hallmark since the mid-2000s. So does my mom. This year has been great so far. I’m loving the diversity of storytelling and actors. Wedding Every Weekend and The Christmas House are already 2 of my all time favorites. RichieRichLv added:#Hallmark kudos for the first same sex wedding on Wedding Every Weekend. Great movie and great to see the diversity Hallmark is striving for. While some users criticized the channel for "pushing an agenda", Hallmark clapped back.

We are proud of our movie, Wedding Every Weekend. Our priority at Hallmark Channel is to develop a broad mix of content, characters and stories in order to create a Hallmark experience where everyone feels welcome.

Wedding Every Weekend follows the story of Brooke (Kimberley Sustad) and Nate (Paul Campbell), who each attend the same four weddings over the course of four weekends and end up falling in love. One of the many weddings they attend is that of Vicky (Carmel Amit) and Amanda (Makayla Moore). While the network has featured people from the LGBTQ+ community, this is the first time an LGBTQ+ wedding has been incorporated, reports Bustle. "It really reflects the world that we live in now," Makayla Moore, who plays Amanda, said in a behind-the-scenes video for the movie. "It's exciting to celebrate love in all its forms." Campbell also recognized that the movie "is acknowledging the fact that love is love."

Thank you for this! I was delighted to get an excited text from my mom that she just watched two women get married on Hallmark. She often worries about her lesbian daughter (me) but this kind of representation helps her be proud.

In a previous statement, Hallmark had vowed to introduce more content that promotes inclusivity and diversity. They had faced criticism that none of their holiday films appeared to feature LGBTQ+ characters or themes. “Diversity and inclusion is a top priority for us and we look forward to making some exciting programming announcements in the coming months, including announcements about projects featuring LGBTQ+ storylines, characters, and actors,” a Hallmark Channel spokesperson previously told PEOPLE in a statement. “We are committed to creating a Hallmark experience where everyone feels welcome."

Thank you @hallmarkchannel I hope this is just the beginning!! Next step? Main story! I’ve been a fan for a long time. As a lesbian I never dreamed I would see this. #LoveIsLove!! #WeddingEveryWeekend 💕 pic.twitter.com/v0n2n88uep

The network was slammed last year after pulling several commercials for the wedding planning website Zola that featured same-sex couples sharing a kiss at the altar. One Million Moms, a division of the conservative American Family Association, published a petition to boycott the channel. The group according to its website was "fed up with the filth many segments of our society, especially the entertainment media, are throwing at our children".

First of all, One Million Moms needs to rename their group. They've never hit their goal & NEVER will. They are not true "Christians" because Jesus never judged anyone. Shame on them.

The Hallmark Channel later walked back on its decision to pull multiple ads. The company apologized for pulling the commercials of the same-sex couples, announcing that Hallmark will be working with GLAAD to “better represent the LGBTQ community across our portfolio of brands.”. “The Crown Media team has been agonizing over this decision as we’ve seen the hurt it has unintentionally caused. Said simply, they believe this was the wrong decision,” said Mike Perry, president, and CEO, Hallmark Cards, Inc., in a statement to PEOPLE in December. “Our mission is rooted in helping all people connect, celebrate traditions, and be inspired to capture meaningful moments in their lives. Anything that detracts from this purpose is not who we are. We are truly sorry for the hurt and disappointment this has caused,” the statement continued.

Jonathan Bennett, 39, who played a part as the gay couple in The Christmas House recently told ET, "This movie is so important because I'm part of the progress, and it feels good. I can only imagine what younger me would have thought of seeing a Christmas movie with a storyline like this; two men in love, having a baby together. I think I would have been so excited, and I know I'm excited. Representation is so important, and to represent this storyline on Hallmark Channel, it's an honor to make a little history," he pointed out. "When I read the script, I got so excited that we [were] going to get to go and make this movie but also for the younger Jonathans out there watching it," Bennett expressed. "To see a movie like that, where you see yourself on screen is so important and I think this Christmas younger me is going to be a little bit less scared and feel a little more seen. Especially with what's going on in 2020, this is going to be a little bit of hope and a little bit of love that everyone can watch."

Watching your Hallmark Christmas movie, The Christmas House ❤️ waited for Thanksgiving night to watch it with my Mother. It's her favorite tradition. Thank you for bringing the LGBTQ+ to the Hallmark Channel. Much love and health to all! Happy Thanksgiving 🥰