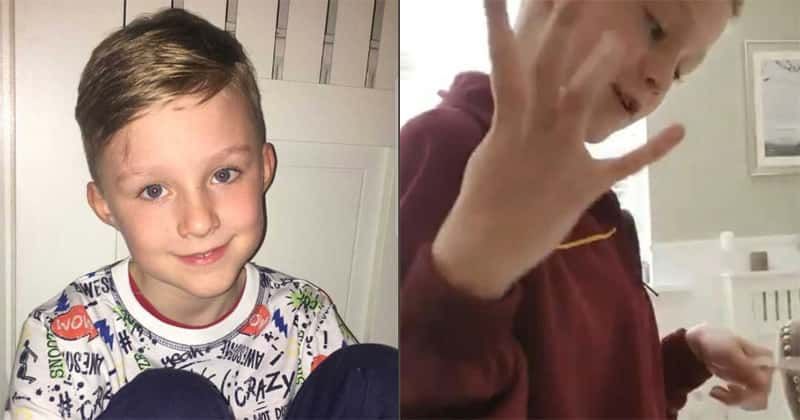 Up until recently, 9-year-old Justin Kiely-May, who was diagnosed with autism at age 3, regularly wore ear defenders since he struggled with a fear of music, especially high-pitched songs. But his stunning vocal range was recently exposed when his mother, Andrea, caught him singing along to Leonard Cohen's Hallelujah. Andrea secretly filmed her son singing, but when his uncle, Brandon Craig, posted the clip to Twitter, it quickly went viral. In the video, Justin smiles to himself as he perfectly sings the classic tune. "My nephew only 9 years of age, cause of his autism he can’t listen to a lot of songs but when he likes a song he knows how to sing gonna be a superstar," Craig wrote alongside the video, according to Metro UK.

My nephew only 9 years of age, cause of his autism he can't listen to a lot of songs but when he likes a song he knows how to sing 🤙gonna be a superstar, ❤️ pic.twitter.com/7QklJj9yHD

Andrea explained to Metro UK that Justin had recently fallen in love with Alexandra Burke’s version of the song, which he had heard recently on the radio. She added that she was happy that so many people got to see Justin's performance. "Justin was diagnosed with autism at three and most of his life he has struggled with music, especially high pitched songs," the 26-year-old mother explained. "We dreaded going to birthday parties just in case they played a song he didn’t like as it would upset him for days. We got him ear defenders and that helped."

"He got to know Hallelujah and one day I heard him sing along to the song so I turned the music down and just listened and recorded him," she added, saying, "I can't look at his little face without wanting to cry, happy tears, of course. He’s just such a pure loving little boy and I’m so glad that now people get to see what I see. He was born to perform he has so much confidence." Andrea also told Metro UK that her son's repertoire now includes Shallow by Lady Gaga, and Proud Mary by Tina Turner.  Andrea also shared the clip on an autism awareness group on Facebook, and was amazed at the positive reactions she got.  "I am blown away by the reaction he has gotten," she told The Mirror. "I have received messages from other autism mammies saying how hearing my son sing has given them hope for the future. I've also received messages from people from New York and New Zealand saying they've watched his video and it has brightened their day." The proud mother added, "I always knew from the day he was born he was special. He would just brighten your day and anybody that meets him can see straight away how pure and loving he is. I shared it on social media because I wanted people to see how autism isn't always bad and that it has given my son an amazing gift. I wouldn't change him for the world."