Berry turned away from the flag while the national anthem was being played at the Pan Am Games on Saturday. But she's not backing down even after widespread backlash 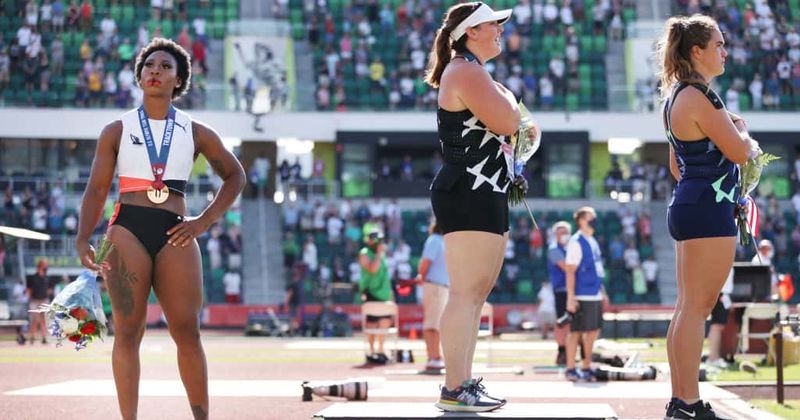 Fresh from the controversy of turning away when the national anthem was being played, athlete Gwen Berry is not backing down. Berry told a channel that the national anthem was "disrespectful" towards African-Americans. Facing backlash over her gesture from lawmakers and the public, Berry clarified what she wanted to convey with her actions. "I never said that I hated the country — never said that. All I said was that I respect my people enough to not stand or acknowledge something that disrespects them. I love my people, point blank, period. If you know your history, you know the full song of the national anthem, the third paragraph speaks to slaves in America, our blood being slain... all over the floor. It's disrespectful and it does not speak for Black Americans. It's obvious. There's no question," Berry told Black News Channel.

Berry was referring to lines in the national anthem that goes something like this:
"And where is that band who so vauntingly swore,
That the havoc of war and the battle's confusion.
A home and a country, should leave us no more?
Their blood has washed out their foul footsteps' pollution.
No refuge could save the hireling and slave,
From the terror of flight, or the gloom of the grave."

Dan Crenshaw calls for Gwen Berry to be removed from the Olympic team because she turned away from the flag pic.twitter.com/c2xWKLXPPJ

Great, from @piersmorgan:
“‘I felt like they did it on purpose,' she moaned.
Really, Gwen?
You think the people running a complex operation like the US Olympic trials…had nothing better to do than secretly plot to annoy u, the 3d best at the Hammer?” https://t.co/YTfDTm0lMD

Berry who came third in the hammer throwing event at the US Olympics trial last Saturday was the only person to turn away from the flag. Later she called the whole affair a "set-up" according to PEOPLE. She claimed the athletes were told the national anthem would be played,  either before or after they were introduced to the crowd. But "at the last minute," they were told to stand at the podium while it played.  "I feel like it was a setup, and they did it on purpose. I was pissed, to be honest," she said told ESPN. Later she draped her T-shirt on her head. It had the words "Activist Athlete" written on it. When asked about the timing of the national anthem, Susan Hazzard, the USA Track and Field spokeswoman however said "the national anthem was scheduled to play at 5:20 p.m. today. We didn't wait until the athletes were on the podium for the hammer throw awards."

She added, "The national anthem is played every day according to a previously published schedule.'' But during the medal ceremony on Saturday, the music started at 5:25. But Berry was not satisfied with this explanation and said it was not really a matter of coincidence. They said they were going to play it before we walked out, then they played it when we were out there. But I don't really want to talk about the anthem because that's not important. The anthem doesn't speak for me. It never has." Berry also expressed her intention of using the Tokyo Olympics as a platform for more protests. My purpose and my mission is bigger than sports. I'm here to represent those ... who died due to systemic racism. That's the important part. That's why I'm going. That's why I'm here today," she said.

Flag-snubbing Olympian's patriotic past comes back to haunt her 'activist' image https://t.co/4GeniqOQIN

She added, "I think sports is a distraction. Sports is entertainment. But my purpose and my voice and mission is bigger than the sport. So me being able to represent my communities and my people and those who have died at the hands of police brutality, those who have died to this systemic racism, I feel like that's the important part."