The wave was so strong that the grandma was quickly taken out into the sea and the coast guard had to rescue her. 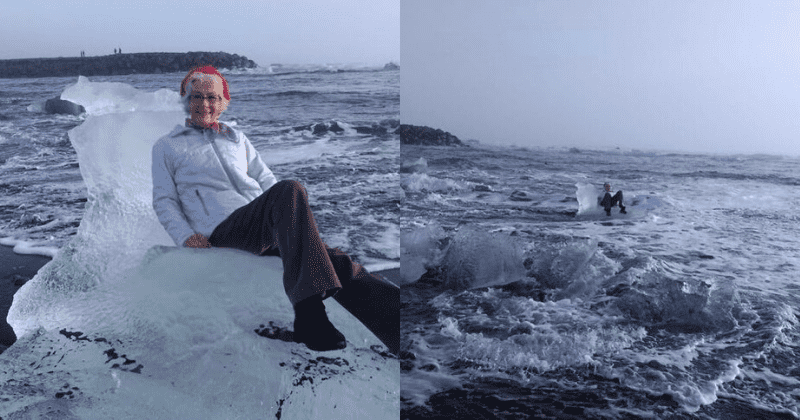 Back in February 2019, 25-year-old Catherine Streng received a series of hilarious text and photos from her dad detailing one particular experience from their trip to Iceland. Recalling the story, Streng says her dad and grandma were on a trip to Iceland to explore "the nature and beautiful scenery" of the Nordic region. She admits her father was not a fan of the cold and "actually hates" it but since her grandma was keen on visiting the tiny country, they decided to go for it, reports Buzzfeed News. Things seemed to be going well up until one point in the trip when they were visiting the Jökulsárlón Lagoon along the southeastern part of the country.

My grandmother almost got lost at sea in Iceland today lmaoooo pic.twitter.com/osHrwTEkyr

The grandmother found a large piece of ice shaped exactly like a lounge chair right along the edge of the lagoon. Not wanting to miss out on the opportunity, the grandma decided to have a photo clicked of herself. However, things turned out to be far worse and scarier, an account of which is available in the form of pictures and texts. While the old woman was enjoying sitting on the ice throne, a wave suddenly lifted the throne away and took her way into the open water while she was still on it. “My father described [what happened] in the following way,” Streng told Buzzfeed News while reading a series of texts her father sent. Before going into the details, she said her father was an English teacher and that "he's pretty good with imagery."

The wave was so quick, that the grandma was quickly taken out into the sea and the coast guard had to come by to formally rescue her. To her luck, a man who witnessed the events transpire nearby was a licensed boat captain, named Randy Lacount, from Florida with professional water rescue training. Recalling the incident to BuzzfeedNews, Streng's dad said: "He just happened to be onshore when the whole thing occurred, so he waded out into the roiling water and pulled her off the iceberg as it drifted out to sea, supporting her until they reached the shore."

Meanwhile, adding details to the story, Streng said her grandmother had watched several people pose for photos while seated on the throne and nothing seemed to happen, so she proceeded to try her luck after asking around if it was okay. "I guess she got to be the lucky one," Streng said while stating that her father's texts made her laugh out loud at work. "That’s just so something that would happen to my family," she quipped. Streng then shared the pictures online and the hilarious yet tense episode went viral on the internet and her grandma became an icon. The tweet with the photos has so far received more than 69.8k retweets and over 170k likes with many adding hilarious tweets to add to the already funny situation. "Granny is going to Atlantis, "Just Mi wrote. "That’s Rose from the Titanic ain’t it," wrote yellowbonemama. "The fact that you just watched and took pictures as granny is floating off is amazing!", wrote David Arnold.

Not everybody saw it as a funny incident, however. A local Icelandic person, Bee_how had a cautious message for people as he wrote: "All the love. As an Icelander, it scares me to see this. We have had an uprise in traveler accidents and death. Tell your grandma to keep safe and if a guide told her that was safe tell her to kick him. The undercurrents there are scary." Others too said, the waters in Iceland are way too violent for such fun and games and that the grandma snuck away to safety thanks to a rescue person who was close by.

Ridiculous woman. Iceland’s water are frigid. Lucky she didn’t drown. They specifically ask people not to do this.