Grandma, 80, Marries Her 35-Year-Old Lover From Egypt Whom She Met On Facebook

Iris Jones stays in a $290,000 bungalow and spends her day on a $250-a-week pension and disability benefit. 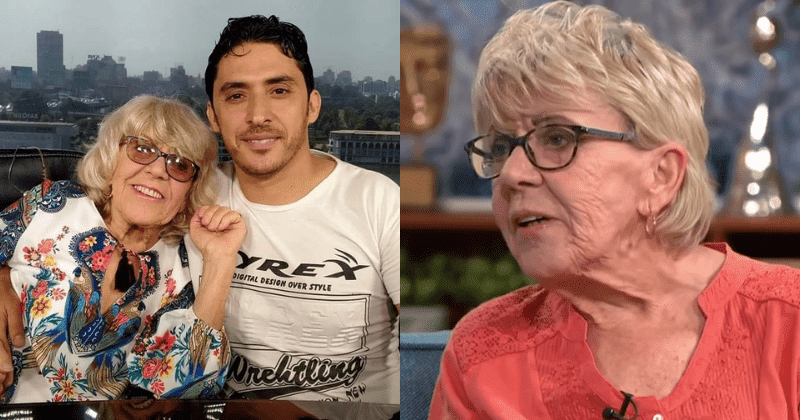 An 80-year-old woman left a morning show viewers in absolute shock after sharing graphic details of her sex life with her 35-year-old Egyptian boyfriend. And now in a recent update, she has now married him. Iris Jones, from Somerset, UK, married Mohamed Ahmed Ibrahim after the couple met on Facebook last year and she flew to Egypt to stay with him. Speaking at a TV show with hosts Philip Schofield and Holly Willoughby on ITV earlier in the year, she revealed graphic details of her first-night meeting the man, and said it included an "entire tube of KY jelly" and that the experience left her "saddle sore", reports Mail Online.

Steamy sex loving 81-year-old This Morning star marries 35-year-old toyboy: Iris Jones - who appeared on This Morning in January to share on her wild sex life with her young Egyptian lover - has tied the knot with her beau https://t.co/GesYBhZKx4 pic.twitter.com/dMWBFHKfIT

As per Al-Watan news, an Egyptian news outlet, the couple have officially wed as per Ibrahim's admission. Speaking to the network, the man said: "I do not want a nationality nor do I want money, I am comfortable like this and I work, praise be to God, with my money." The wedding which took place in Egypt is said to have happened after Iris converted to Islam. The couple first met each other on Facebook last summer on a group about atheism. Ibrahim professed his love to the senior citizen on social media and stated that the feelings were strengthened when he met her for the first time at Cairo airport in November last year. Speaking of the moment to MailOnline, he had said: "I was very nervous but the moment I laid eyes on her I knew that it was true love. I’m a very lucky man to have found a woman like this."

Ibrahim worked as a welding inspector before giving up his job so that he could spend time with Iris when she came to Cairo. The eldest of four, he lives in a three-room house with parents, two sisters, and a brother. When questioned if he went through with the marriage for a British passport or for his wife's money, Ibrahim vehemently denied the claim. Jones, a former cleaner, meanwhile, stays in a $290,000 bungalow and spends her day on a $250-a-week pension and disability benefit. Ibrahim added: "I don’t care where we live or how rich or poor she is, I just want to be with Iris.  At the end of the day, which country she wants to make her home is her choice; it can be either Britain or Egypt. People think I am with her for all the wrong reasons. I know Britain is a beautiful country and a lot of people want to go there but I’m not bothered. I'm prepared to live with her anywhere in the world."

The 80-year-old Iris Jones reportedly traveled to Egypt for the wedding and converted to Islam.

Even though she lives in a KSh 29M bungalow and gets a pension of KSh 26k every week, Mohamed said he was not interested in her money. #tukonews https://t.co/mUxdd6Q7vE

Speaking of his wife's time in Egypt, Ibrahim said he took her home for dinner where she spent time with his mother. "My mother really liked Iris and they got on well even though there was a language problem. But my mother said to me that if I’m happy, then she’s happy. That’s all any mother wants; for her son to be with a woman he really loves." The senior citizen is a divorcee of over 40 years and has managed to pool in resources so that she could leave her home and fly to Egypt to marry the Giza-born man. The couple's bizarre and unusual story became major news earlier in the year after appearing on ITV's This Morning where they discussed the huge age gap and other details about their sex life.

"I couldn't walk the next day" - British woman, 80, talks about her first sexual encounter with her 35-year-old Egyptian toyboy

Iris Jones, the 80-year-old British pensioner who is planning to marry her 35-year-old Egyptian toyboy despite the age difference between them, ha… pic.twitter.com/IjgwwFAtr5

The hosts weren't ready for the adult-themed responses with one of them bursting into giggles when hearing their responses. "The first night was pretty rough. Nobody had been near me for 35 years... I thought I was a virgin again!" Iris continued with her story and said: "Can I tell you what we used? A whole tube of KY jelly." The other host burst out laughing as the lady added: "The thing is I couldn't walk the next day... I felt like I was riding a horse! Saddle sore wasn't in it. Anyway, we got over it."

"Who needs language when you are in love?", smitten Iris Jones says.https://t.co/sskIYyAV8T