trending celebrity people lifestyle news animals
There's Going To Be A '9 To 5' Renuion On 'Grace And Frankie' With Dolly Parton, Jane Fonda and Lily Tomlin

There's Going To Be A '9 To 5' Renuion On 'Grace And Frankie' With Dolly Parton, Jane Fonda and Lily Tomlin

On Friday, Netflix made the exciting announcement on Twitter. 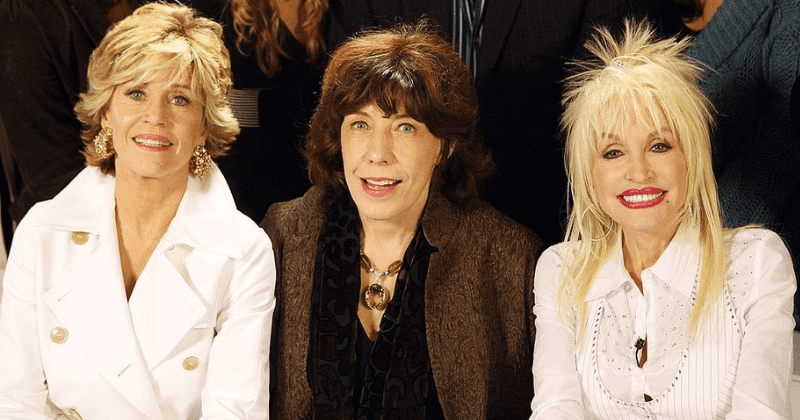 Looks like the producers of Netflix's Grace and Frankie will be turning our dream into reality after all as Dolly Parton will be joining her 9 to 5 co-stars, Jane Fonda and Lily Tomlin, for the upcoming final season of the hit show. On Friday, Netflix made the exciting announcement on Twitter which read: It's finally happening: Dolly Parton will appear in the seventh and final season of Grace and Frankie!!! Although the streaming giant did not provide any other details about Parton's role, the news of her involvement was enough to delight fans.

The famed trio, who starred in the 1980's comedy 9 To 5, will finally be reuniting over 40 years later, reports CNN. Earlier this year, the country music icon even teased viewers about her appearance on the Grace and Frankie show before it ended in 2022, seven years after it first aired. Appearing on the UK talk show Lorraine, Parton said, "I have been trying to do Grace and Frankie for years. We worked so well on 9 To 5 and it's a crazy wonderful show." According to Hello! Magazine she continued, "We have been trying to write me in somehow so when it is safe to actually do a production, I will probably get around to doing that."

The 9 to 5 crew back together again pic.twitter.com/mQaqw0ijjL

While details about the 75-year-old's role in the upcoming season had been kept under the wraps for sometime, show's lead Tomline did tease fans in January saying, "We have a great role for her this time, I think she will do it. I'm just hoping she will." The actor added that the role could also be done remotely which would definitely make it easier for the Parton given the philanthropist's "unbelievably busy" schedule. "She's always writing books or writing songs or doing something for people or helping people in Tennessee totally," Tomlin told Today Show hosts Hoda Kotb and Jenna Bush Hager about Parton.

This reunion, although
not on the set of #9to5,
is still going to be so
utterly fabulous!!!

Apart from Jane Fonda and Lily Tomlin, Grace and Frankie also stars Martin Sheen and Sam Waterston. The show, written by Friends creator Marta Kauffman, follows an unlikely friendship between two women in their seventies whose husbands left them to marry each other. The filming of the new season has been delayed many times due to the coronavirus pandemic but much but thankfully the first four episodes were dropped on the streaming platform back in August. The remaining 12 will be on Netflix next year.

Dolly Parton to guest on 'Grace and Frankie' - CNN https://t.co/WOBfQ7ueFV

As for the film 9 to 5, it follows three women Doralee, Judy and Violet, who are out to exact revenge on their sexist boss. The movie was later adapted for stage by the Jolene singer with a production opening on London’s West End in 2019, according to Yahoo! News. Ever since working together in the 1980 film, Fonda, Tomlin, and Parton have been firm friend and we cannot wait to see the awesome trio working onscreen together once again!