The surgeon offered to remove the glue from her hair, a $12,500 procedure, for free 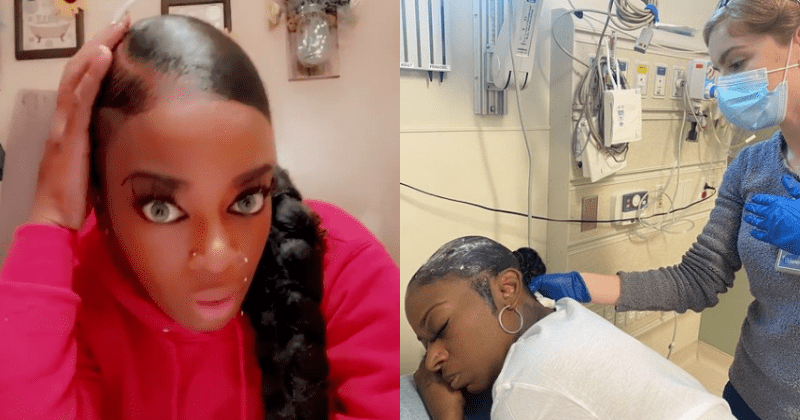 Tessica Brown aka "Gorilla Glue Girl" has finally got some relief, after she used the super glue on her hair. In a video on TMZ, Brown was seen in the operation table being treated. She became a viral phenomenon when she recounted her ordeal on social media. In a video, Brown said she tried everything she could to remove the glue even washing her hair 15 times but in vain. She was able to remove a part of her hair after trying out some home remedies. But that wasn't enough. She suffered severe headaches and had burn marks on her scalp, and finally went to a local hospital to get help, who were unable to do much. Finally, Dr. Michael Obeng, a Beverly Hills plastic surgeon offered to perform the $12,500 procedure for free to remove the adhesive.

She was seen in a hospital suit going in for her operation after she flew from her home in Louisiana to Los Angeles on Wednesday. For the procedure, she was given a light dose of anesthesia. The doctor and his staff are seen applying a number of liquids and other substances on her hair as it slowly loosens from Brown's scalp. The medical personals are also seen cutting parts of Brown's hair with surgical scissors. Dr. Obeng told the publication there was nothing much to the procedure and he used some very basic items - a medical-grade adhesive remover, olive oil, some acetone, and aloe vera. The main ingredient in the Gorilla Glue responsible for its savage hold is the chemical, polyurethane. All the substances used by Dr. Obeng were directed to break this down and it worked.

The doctor did a dry run using a dummy with a wig, before proceeding on Brown's head. He told TMZ, "I looked up the compound. The main actual ingredient in Gorilla Glue, polyurethane, and we had figured out the science, how to break it down. So I then decided, now I’m gonna reinvent the wheel." Following the procedure, he added, "Surgery went well. She had a lot of irritation on the scalp, especially the edges of her head because of all the chemicals. She is very, very lucky that she did not sustain a lot of injuries to her scalp. This type of ordeal is no joke." Dr. Obeng is a celebrity plastic surgeon originally from Ghana who studied at the Harvard Medical School grad reports New York Post. He appeared on the E! TV reality series Second Wives Club with his wife in 2017.

Following the procedure, Brown was understandably relieved. "It’s over. Over. Over. I need my hair done" before Valentine’s Day, she told TMZ while adding, "Now I wish I had a weave."  A representative for Gorilla Glue said, "We are glad that Miss Brown was able to be treated and we hope that she is doing well." In a clip posted on her Instagram page following the blunder, Brown had said, "My hair, it don't move. You hear what I'm telling you? It don't move. I've washed my hair 15 times." She shared another clip where she was seen washing her hair but the soap and water were of no help as previously reported. In the clip, she revealed further that she had run out of her regular hairspray and used the glue instead. She even admitted that doing so was a "bad...bad...bad idea."

According to her, her hair was stiff from the glue despite trying to remove it earlier this month. She finally went to the St Bernard Parish Hospital to get treated but they were of not much help. She also started a GoFundMe page to finance her medical treatment.