According to the zoo, not only is Anaka’s skin unique, but her personality is as well. 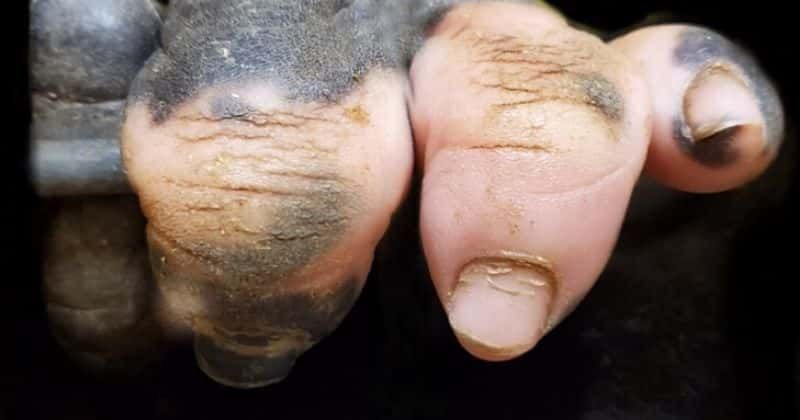 Zoo Atlanta hosted a really fun party not too long ago. Their cherished gorilla Anaka turned 6 and they had a birthday celebration for her. The employees at the facility marked the happy day by snapping a few pictures of the big girl and shared them on Facebook. As people began to send Anaka their best wishes, they noticed something unusual;  the gorilla had a unique patch of pigment on her hand. The picture is a close-up of the pink patch, that looks remarkably like a human hand itself. This isn't surprising though considering that gorillas, like humans, have opposable thumbs, too.

Similar to all primates, gorillas also have individualized fingerprints and toe prints, which are at times used for identification purposes. They use them for opening, scraping, cleaning and scratching things, unlike other animals that have claws reports Bored Panda.

Gorilla fingers.
At the Atlanta Zoo, the gorilla Anaka has a lack of pigmentation at her fingers. pic.twitter.com/SAYwrn56x3

According to the zoo, not only is Anaka’s skin unique, but her personality is as well. "[She’s] often barking at her mom and others to get a prime spot for food and juice," they wrote on their website. "She is often seen riding piggyback on her brother and sisters."

While some people opined that Anaka has vitiligo, which is a long-term skin condition characterized by patches of the skin losing their pigment. Morena Lale informed them that it wasn't the case, She, too, had the same question. She had asked the zoo about it, and they did not confirm that to be true. She said, "I asked this question … and this is their reply: 'Well, her skin pigment has always been like that and hasn’t changed over the years, so we think it’s just a cool birthmark.'"

This gorilla named Anaka is from Zoo Atlanta. Some people were thinking Anaka has vitiligo, a long-term skin condition characterized by patches of the skin losing their pigment. However, it could also be a cool birthmark. pic.twitter.com/ES88vDqZQr

The condition is even more uncommon in animals, but there have been cases of vitiligo in cats, dogs, and even horses. As with humans, vitiligo in animals is a cosmetic affliction. Aside from the loss of pigmentation which can create a unique looking coat, pets with vitiligo can live long and healthy lives. Most cases of vitiligo in pets are hereditary. Certain dog breeds are at a higher genetic risk of developing this condition.

Growing up gorilla: Do they get any prettier than 2-year-old Anaka? (photo by Jodi Carrigan) #OnlyZooATL pic.twitter.com/Rb0P88v8SY

Zoo Atlanta's mission is to strive to inspire the citizens of Atlanta and Georgia and all visitors to the Zoo to value wildlife on Earth and to help safeguard existing species through conservation.

People were understandably surprised by her unique features. Susan McWilliams Gilchrist said, "Oh wow. They look human!!!" Another noted, "Just shows how close we actually are to them".  Allen Jeanette Mull stated, "I have never seen monkey hands and would never have an opportunity to especially up close like this! Such a cool picture!"