The news was confirmed by Hawn herself in a new interview with Entertainment Tonight. 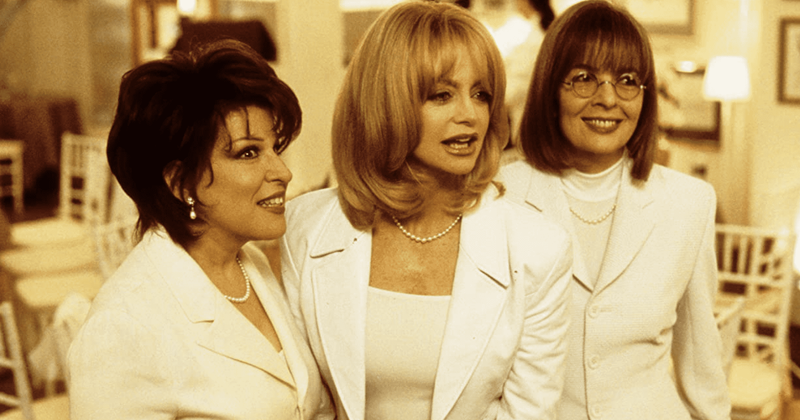 It's almost official! Goldie Hawn's reunion film with her The First Wives Club costars Bette Midler and Diane Keaton is very likely coming soon. The news was confirmed by Hawn herself in an interview with Entertainment Tonight, during which she teased the upcoming comedy Family Jewels, in which the trio will share a screen together after 24 years. Speaking to the outlet about the movie, the 74-year-old said: "The script has to be approved and right now they've just given us another draft, so I gotta read that. So, we're inching our way towards it, let's put it that way."

Goldie Hawn, Diane Keaton and Bette Midler will be together again soon! https://t.co/iceEqTchW0

The plot of the movie involves Hawn, Keaton, and Midler's characters forced to spend the holidays together, along with their children and grandchildren. "I think it's all in the execution," Hawn said about the movie. "It's the writing and the execution. Because giving it back to us, we can play with it and improvise. It's like three tabla players, playing the tabla and talking to each other and answering. It's pretty fabulous." The Overboard actress was thrilled to be back working with her former co-stars and said the experience "was amazing". "We laughed and also worked together and also ran lines together. It was really pretty fantastic."

According to Variety, Brian Oliver and Bradley Fischer will produce the new movie, along with Alan Nevins. Tracey Nyberg will executive produce while Peter Hoare has been roped in to write the screenplay. "The chemistry of Diane, Bette, and Goldie is unmatched and irresistible, and I’m thrilled to help reunite them on screen for generations of fans," Fisher said, according to the outlet. Oliver also spoke about bringing the project to fruition and said: "This movie fits perfectly in our plan to finance and produce four to six major studio theatricals a year and puts movie stars back where they ought to be – on the big screen,” said Oliver.

The actresses are said to have shared a great bond while working with each other over two decades ago for The First Wives Club. In an interview with PEOPLE, Midler spoke about how all the actresses "had such a great time" on the sets of The First Wives Club. "I think it's funny. When women get together, they laugh harder with each other than they do with men," she said. "I don't know what it is. I guess they feel freer or something like that. Family Jewels is something that people have been working on. Sometimes you get stuck in the scriptwriting process and things don't work out. It's an effort. It's an effort to make all the pieces fit. It's not that we don't want to do it. We all want to do it. We're just trying to get the script in order so that people will enjoy the picture. Without a great script, you really don't have anything. So, we're sort of waiting for that to come in."

I can not wait for this. I can watch the first one over and over. I will plan a whole night for this movie!! Thank you

In The First Wives Club, released in 1996, Keaton, Midler, and Hawn play former college friends who reunite at a funeral and soon learn that their friend died after hearing about her ex-husband’s marriage to a younger woman. And so, the three divorcèes set out to take revenge on their own exes. The movie was based on a 1993 book of the same name written by Olivia Goldsmith. Directed by Hugh Wilson, the film went on to gross over $180 million at the box office as opposed to $30 million. The movie also starred Maggie Smith, Sarah Jessica Parker, Victor Garber, and Dan Hedaya in supporting roles. Despite doing strongly in terms of collection, the first installment only received a 50% rating on aggregator site Rotten Tomatoes, which stated that the movie was undone by poor writing, "tepid plotting and a fatal lack of satirical bite."