Goldie Hawn Shares Father's Day Tribute To Kurt Russell: "Nobody Loves Like Him"

The Oscar winner wrote a heartfelt post as a tribute to her partner of 37 years, Kurt Russell for Father's Day. 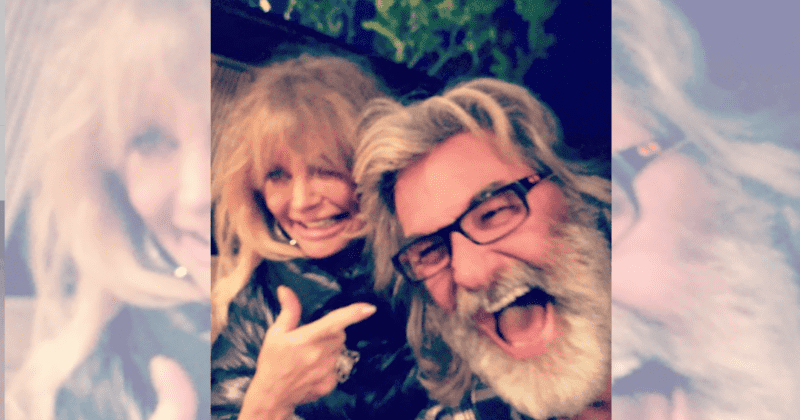 As the world celebrated Father's Day on June 20, social media timelines were flooded with emotional and touching posts paying tributes to all the dads out there. Plenty of Hollywood celebs too joined in on the trend to share lovely messages about the dads in their lives. Goldie Hawn, the Oscar winner also shared a gushing post about Kurt Russell, her partner of 37 years. "Nobody laughs like him and nobody loves like him ❤️ Happy Father’s Day to you my angel 😇," she wrote as a caption to a goofy selfie of the couple. Russell and Hawn got together in 1983 and have since raised all their children together in a blended family. While Russell had one son, Boston, from his marriage to Season Hubley; Hawn had two children, Kate Hudson and Oliver Hudson from her marriage to Bill Hudson. Besides these three, the couple has a son of their own, Wyatt Russell, who also happens to be the youngest in the family. For Father's Day, the legendary actress showered praises on her longtime partner as friends, family, and fans joined in to wish Russell a happy dad's day as well.

Even though Hawn and Russell got together only in 1983, they met each other a little under two decades before that, back in 1966 on the set of the 1968-movie The One and Only, Genuine, Original Family Band. However, their relationship blossomed only on Valentine's Day 17 years later when they met again on the sets of Swing Shift, a romantic/drama/war film set in WWII. Although the movie did poorly commercially, it ended up paving the way for a lasting relationship. Hawn spoke about her partner, Russell, 69, to People back in April and said he made her feel beautiful for the last 37 years together. "The other night we were going to go have dinner. He looks at me and goes, ‘You’re unbelievable,'” Hawn recounted. "‘He said I cannot believe how [beautiful] you look.’ He really appreciates that."

The Hawn-Russell relationship is widely adored, with Hawn's daughter Kate revealing that living up to Hawn and Russell’s relationship is a goal in itself. "Just the fact that they’ve been able to maintain a unit for all of us, in times of turmoil, they really are the center of all of our lives," the Almost Famous actress said. Meanwhile, Oliver also shared a heartfelt message on his Instagram to his stepfather on Sunday and wrote. "Mr. Russell, AKA PA.. you swooped in and completed our family. I was 6.. fearful and uncertain, and you taught me confidence and independence..,"  he wrote in the post. The post had a vintage Hawn-Russell family photo featuring all the children the couple shared from their relationship and their previous marriages.

Apart from the Russell-Hawn household, several other A-listers also had loving posts as a tribute to their fathers. Captain America and Snowpiercer star Chris Evans shared a picture of himself and his father with the beach as a backdrop and wrote: "Happy Father’s Day to the greatest mustache I’ve ever known." Chrissy Teigen shared a picture of her husband John Legend holding his daughter and son in two separate pictures and wrote: "I could have never imagined a better daddy for my babies. You were made to do many things in life but you were absolutely made to be a dad. We love you we love you!!"

Jada Pinkett Smith shared a video of husband Will Smith and wrote a long caption: "There are so many things that I haven’t and don’t get right but there is one thing I got really right and that’s choosing you as the Father of my children," she wrote."Thank you for respecting and ALWAYS supporting my Mothering which I have found to be one of your greatest super powers. I’m deeply grateful to you Will. I love you and Happy Father’s Day!"