This indicated more than anything that the domestication of animals has enhanced interspecies communication and emotion perception. 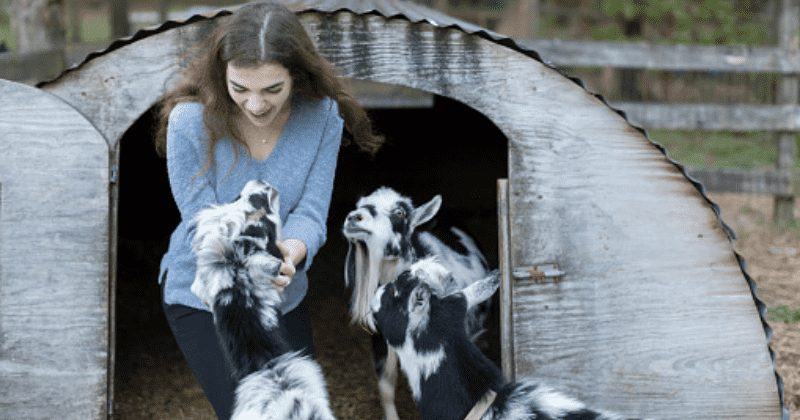 Goats are gentle creatures. While they may seem like simple-minded beings who love taking a bite of anything in sight, they are actually smarter than they seem and even have advanced cognitive abilities. An experiment conducted by researchers published in the journal Royal Society Open Science found that domesticated goats are able to discriminate human facial expressions and happen to prefer positive emotional facial expressions. This suggests that a wider range of animals can read people's moods than was previously thought, reported the BBC. The researchers stated that the same holds true for other domesticated animals like dogs and horses as well.

For the experiment, 35 goats (14 females and 21 castrated males) from Buttercups Sanctuary for Goats in the UK were tested. To find out how these goats would respond to facial expressions, pictures of human faces, of people the goats had never seen before, showing positive (happy) and negative (angry) facial expressions were printed. In an enclosure, an experimenter would stand at one end of a metal hurdle holding dry pasta, a favorite goat snack. Many of the goats were eliminated from the experiment for not approaching the experimenter at all. They then conducted four sets of experiments with variations to check how the goats would react differently.

Everyone loves smiles, even goats

Pictures of the two facial expressions were placed on either side of the enclosure. In each session of the experiment, half of the goats were shown male faces, and half were shown female faces. The positions of the images were also switched up, with the positive image sometimes being on the right side of the pen, and other times on the left. The researchers found, "Overall, goats differentiated the two sets of emotional expressions and preferred to approach happy faces first. In addition, they interacted first, more often and for longer duration with happy faces when they were presented on the right side rather than the left."

With regard to the goats' preference for the right side, the researchers suggested that there might be a "differential engagement of the left-brain hemisphere for approaching happy faces or an engagement of the right hemisphere for avoiding the negative images on the left side." This indicated more than anything that the domestication of animals has enhanced interspecies communication and emotion perception. "The study has important implications for how we interact with livestock and other species because the abilities of animals to perceive human emotions might be widespread and not just limited to pets," Alan McElligott, from Queen Mary, University of London and co-author stated.

Co-author Natalia Albuquerque, from the University of Sao Paulo, Brazil, said: "The study of emotion perception has already shown very complex abilities in dogs and horses. However, to date, there was no evidence that animals such as goats were capable of reading human facial expressions. Our results open new paths to understanding the emotional lives of all domestic animals." Researchers in the University of Helsinki's Canine Mind research project found that oxytocin made dogs interested in smiling human faces. Oxytocin is associated with affection and trust. But it also made them see angry faces as less threatening, according to Science Daily.

Goats Might Prefer A Smile To A Frown, Study Says https://t.co/ziKTp4eOiB

"I have no doubt that animals know when they've been treated kindly," Susan Schoenian, goat (and sheep) specialist at the University of Maryland Extension told NPR after learning about the experiment. "But I don't know how the goats would be able to relate the pictures of faces to real people or real behavior." She added, "But sometimes research that gives us an understanding of a behavior in an animal may lead to an understanding of it in people."