trending celebrity people lifestyle news animals
Girl Tells Sister It's Her Own Fault That She's Getting Bullied, Asks If She's Wrong For Doing So?

Girl Tells Sister It's Her Own Fault That She's Getting Bullied, Asks If She's Wrong For Doing So?

When the elder sister took her concern to Reddit, she was told that her sister was undiagnosed for autism spectrum disorder. 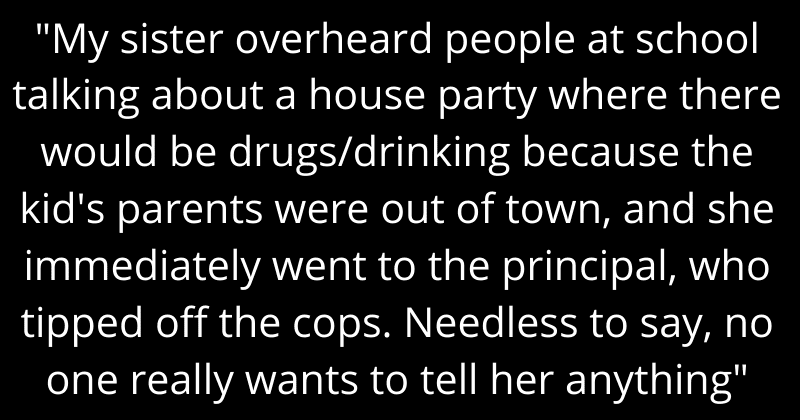 A concerned elder sister wanted her younger sibling to fit in with her classmates and make friends. But no matter how hard she tried to make her sister understand her behavior was repelling her peers, she did not listen. So she took to Reddit to ask a bunch of strangers and check whether she was in the wrong somehow when it came to looking out for her sister. User nunyabeeswax123 posted on the AITA subreddit wondering if she was a jerk for telling her sister that it's her fault she gets bullied. The poster's 15-year-old sister has been a victim of bullying her whole life. She then goes on to list why this was happening.

"I have stood up for her so many times," the 17-year-old wrote. "She doesn't listen to me when I try to tell her why people don’t like her. She refuses to wear a bra despite being a C-cup, she won't put on deodorant so she always stinks, she won’t shave or comb her hair, and she always corrects people on their pronunciation and grammar, even one of my friends who has a speech impediment. Yes, we have told her about it, and no, she does not listen." But the biggest reason for people not liking her was that her younger sister is a tattletale.

"One example of this I can think of was when she came home from a slumber party the next morning crying, and when our parents asked why, it was because her friends wanted to stay up late, and when she couldn’t convince them to go back to bed, she went and told on them. So they got mad at her and ignored her the rest of the next morning," she explained. "Probably the most recent and worst example of the tattling was last year. My sister overheard people at school talking about a house party where there would be drugs/drinking because the kid's parents were out of town, and she immediately went to the principal, who tipped off the cops. Needless to say, no one really wants to tell her anything."

She also wrote about the time when her sister was venting about some kids who were mean to her, and when she responded saying, "don't worry, they're just a-holes," her sister immediately ran to their parents to complain about her elder sister's swearing. "I had to put a dollar in the swear jar. After my mom left, I took my sister aside and said: "You know, maybe if you learned to keep your mouth shut, someone might actually like you." The younger sister wouldn’t stop crying and locked herself in her room until her parents consoled her. She even mentioned that her parents thought the tattling was the honorable thing to do.

Redditors did not have to decide whether the poster was a jerk or not because they had realized this was much more than that. User bloodrose_80, with the most upvoted response, wrote, "I am wondering if she may have some sort of undiagnosed condition, like autism spectrum disorder. These behaviors are not neurotypical in girls her age. People with autism often have sensory issues and take things literally. Maybe she thinks she has to report things? It seems like she may benefit from some neuropsychological examinations. I don't think you are TA, but your delivery was maybe a bit harsh."

This view was supported by a  mental health counselor who wrote, "She's probably "high functioning" enough that the school has never tried to assess her for an IEP, but this definitely sounds like there's more going on developmentally." User oblivionkiss stated that as an autistic person they could identify similar patterns from when they were younger. "My mom used to call me the "rules police" because I would always insist people follow the rules and if they didn't I'd tell on them. Please suggest your parents get her tested. She definitely sounds like she's on the spectrum," they suggested. Many others echoed this sentiment and others pointed out that irrespective of a person's behavior, no one ever deserves to be bullied.