trending celebrity people lifestyle news animals
Girl, 13, Forced To Marry 48-Year-Old Man And Care For His Children Who Are The Same Age As Her

Girl, 13, Forced To Marry 48-Year-Old Man And Care For His Children Who Are The Same Age As Her

The wedding happened in an Islamic ceremony in Maguindanao province, Philippines. 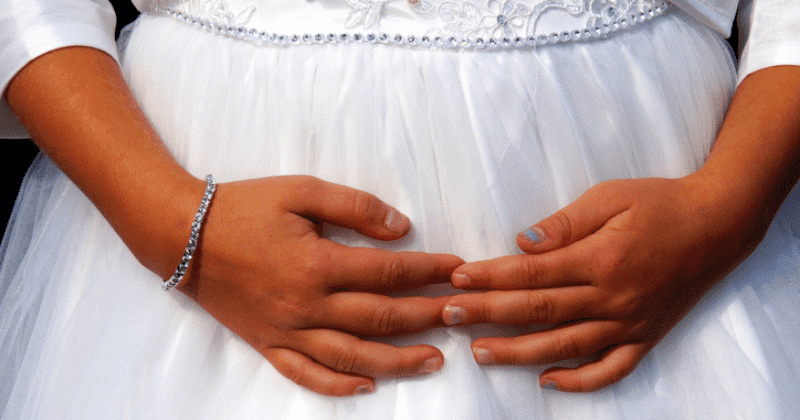 In a rage-inducing incident, a 13-year-old bride was forced to marry a 48-year-old man to become his fifth wife. The wedding happened in an Islamic ceremony in the Mamasapano, a primarily Muslim-majority Maguindanao province in the Philippines. The girl's friends and family were in attendance to witness the event as she dressed in traditional white and tied the knot. Groom Abdulrzak Ampautan married the girl and now expects her to take care of his own children - some of whom are her age, reports DailyMail.

A 13-year-old girl in the Philippines has been forced to marry a 48-year-old man who already has four wives. She will look after his children.https://t.co/TEPVOv4B1r

Ampautan reportedly spoke to local media and said: "I am happy to have found her and spend my days with her taking care of my children." The wedding took place at the man's house where he was given a traditional sermon on being a good husband. The event was attended by several wedding guests and was highlighted by a festive procession involving drum bands as they walked to the teen bride's home. A picture shows the couple seated next to each other and even reportedly smiled and laughed.  The child reportedly said: "I am not afraid of him because he is nice to me. I am learning how to cook because I'm not good at it now. I want to make my husband happy."

That should never happen
Put him in jail

Over three weeks after the wedding, Ampautan reportedly built a small house for the bride where they are set to stay together. He is said to be working as a farmer while she is expected to take care of household chores as well as taking care of his children from four of his earlier marriages. The man claimed to not have children with her till she turns 20 and that he would be funding her education in the meantime. "I will pay for her school because I want her to get an education while waiting for the right time to have children."  As per the community norms in the Mindanao region, boys are allowed to marry as early as 15 while girls can marry at the first sign of hitting puberty.

This is beyond sickening

A United Nations Children's Fund (UNICEF) survey points out that instances of child marriages are not uncommon in the Philippines and that the country has the 12th highest number of child brides in the world at 726,000. As per the report, as much as 15% of girls are married before they turn 18 while 2% are married by the time they turn 15. Another concerning fact for the girls is that divorce is illegal in the country, which puts the already vulnerable girls in an even worse position as they may be subjected to a lifetime of domestic abuse and torture.

This is pure evil .

Child marriages are a mainstay in several poor and impoverished countries of the world with evidence seen in parts of Asia and Africa. For instance, just recently, the Somali parliament passed a law that allows men to marry girls who pass their first menstrual cycle. According to Time, the bill states that a girl or woman can be married against her consent if her family approves. The bill undoes years of efforts to offer more protection to women in what's considered one of the world's most conservative countries. The United Nations came out lashing at the potential bill criticizing and even calling it a bane on the world. UN's special representative on sexual violence in conflict, Pramila Patten, said the new Sexual Intercourse Related Crimes Bill “would represent a major setback in the fight against sexual violence in Somalia and across the globe.”

The United Nations called on Somalia to withdraw the bill with Pramila Patten making it clear that it's designed to weaken protections for victims of sexual violence. The U.N. mission to Somalia called the bill “deeply flawed” and called on parliament to re-introduce the original one. Anders Thomsen, the Somalia representative for the U.N. Population Fund, said the original bill “will be vital in preventing and criminalizing all sexual offenses.”