Girl, 11, Is Spreading Joy By Offering 'Flags Of Gratitude' To Local Heroes In Her Town

"It makes me feel really good because I enjoy spreading kindness to people," says Callie Danysh 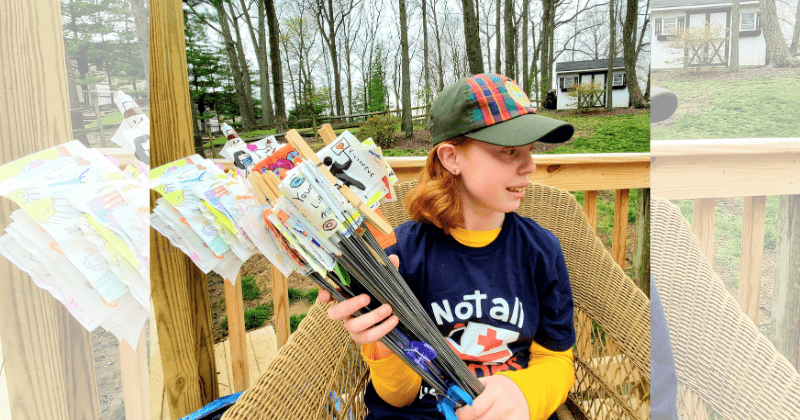 Morris Township in New Jersey is a cozy little town. It has a police department, a fire department, a medical center, a few restaurants, and of course, some fun stores to keep the residents occupied. Since the pandemic arrived, the town became rather quiet except for the frontline workers who put themselves on the line to protect their community. So, to uplift the spirit of the town during a hard time, an 11-year-old girl named Callie Danysh came up with a special idea— leaving "Flags of Gratitude" at the offices of essential workers. The project has been a big hit so far, to say the least.

According to New Jersey News Network, it all started as a service project at the Cub Scouts group, initiated to honor the local heroes.  But as the pandemic rolled in, the project was wrapped up and everything more or less went under the radar. That's when Danysh started this little project of her own, inspired by the Scouts idea. Currently, the pre-teen paints an image for every flag or tile all by herself and adds little nuggets of inspirational messages in support and appreciation of every essential worker in town. So far, just about every staff and volunteer of local businesses and organization across Morristown, Morris Plains, and Morris Township are finding these Flags of Gratitude regularly.

As per reports, the young girl has made over 2,000 flags to encourage people and uplift others  - a sight readily available to be seen on the campaign's official Facebook page. The list of heroes she's been honoring continues to grow in number and she's had to venture out past the essential workers in town because she's practically covered just about everybody. On November 11, she's decided to honor a different set of heroes, armed with her Sharpie markers and paint pens. This time, she chose to direct her attention towards honoring former service personnel by making special flags to place outside the Veterans of Foreign Wars site in Morris Plains, reports Good News Network.

The new endeavor follows the flags she made for the Morristown's Army and Navy Recruiting Center last month. Her work goes beyond making these inspirational flags. It also raises money for people in need. She raised $1,000 for HelpMorrisNow, an initiative that gets food and clothing to locals. This time around, she's raising money for Good Grief, an organization that helps families going through loss, and Hubert’s Animal Welfare. Essentially, she’s doing whatever it takes to give back to the community. Speaking about her impressive feat, she said: "It makes me feel really good because I enjoy spreading kindness to people."

She's good at making donors feel special about themselves too as she offers a unique keepsake for all of them -  a 9-inch photo tile that seems to have impressed everybody. Those looking to support the girl for the great work she is doing and to get updates on what she has planned for the future, you can follow her charity work on Facebook here.