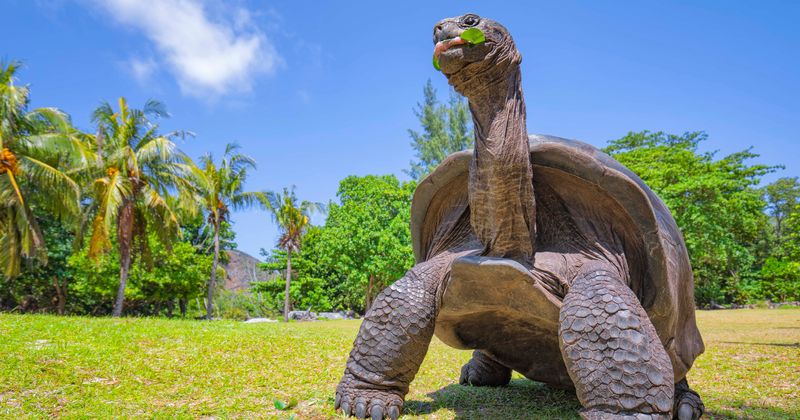 Aldabra Giant tortoises are one of nature's true wonders. An endangered species, they are the largest living tortoise species in the world and one of the longest living animals. While usually they are found only in the Galápagos, a new batch of Aldabra babies born in Necker Island, in the British Virgin Islands is believed to be a first-of-its-kind. Necker island is owned by business magnate Richard Branson who is also quite the conservationist. On his Instagram page, Branson shared a video with a huge Aldabra tortoise, believed to be the new mother, while holding her babies. He wrote: Delighted to share that the first-ever baby giant tortoises on Necker Island have been born. We believe these are the first Aldabra giant tortoises bred naturally anywhere in the world outside of the Aldabra Atoll.

A staff of the billionaire spotted the first hatchling not long after it emerged from its nest wrote Branson in his website. "When she spotted it, she cleverly realized it had different markings than the other tortoises that live on Necker. A second baby was soon found ... We quickly brought in our animal conservation team, led by Vaman (Necker’s Wildlife Conservation Manager, Vaman Ramlall) to ensure the health and safety of the precious babies. Their mother found a quiet place to nest with the right conditions and temperature for her eggs to hatch. We have been proud to have giant tortoises on Necker for many years, along with many other endangered tortoise breeds. But this is the first time the giant tortoises have successfully bred. They did lay eggs a few years ago, but sadly they never hatched," he stated.

Necker Island is also the site of Branson's luxury hotel specifically dedicated to conversation. According to Smithsonian National Zoo & Conversation Biology Institute, Aldabras males are considerably larger than females and have longer, thicker tails. A male can weigh up to 550 pounds while a female tortoise can weigh 350 pounds. The largest one ever recorded was one that weighed 672 pounds and is considered the world's "largest free-roaming tortoise ever recorded." Branson added. "Giant tortoises usually lay between two and seven eggs (not many, especially compared to turtles). But now they have done so successfully, more could follow. Because they nest a few times a year, we hope to see many more baby giant tortoises in the coming months and years."

He said further, "Giant tortoises have an average lifespan of more than 100 years and have been known to live over 250 years - so we hope they have a long happy life here on Necker - and their parents can look forward to grandchildren in several decades' time!" According to Turtle Conservatory, Necker Island welcomed 24 captive-bred tortoises in 2018. These included 4 Radiated tortoises, 10 Burmese Star tortoises, and 10 Burmese Black Mountain tortoises. They joined the already present herds of giant Indian Ocean Aldabra tortoises, Red-Footed tortoises, Burmese Black Mountain tortoises, and Burmese Star tortoises on the island. About the facilities present at the island for the well-being these creatures, the website added the presence of a "large outdoor compound to house the creatures."

It added, they have "very large open-air paddocks as another breeding colony in the battle against extinction. The climate and ecology of the island are ideal for these animals. Our ultimate goal is to restore all of these species back in their native lands, but for now, assurance colonies represent the ideal way to secure and propagate species still under threat in their natural environment, in their fight against extinction. "