Measuring nearly 33 feet in length and with a skull weighing approximately one tonne, it is the largest and most complete ichthyosaur fossil ever found in the UK. 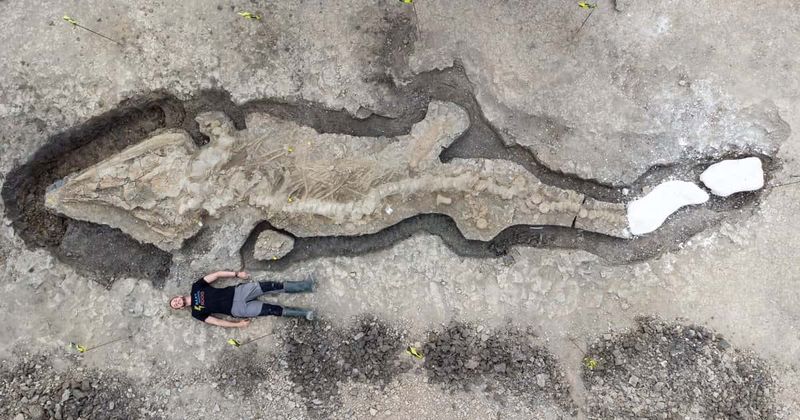 The fossilized remains of an extinct prehistoric reptile predator, known colloquially as a "sea dragon" have been discovered at a British nature reserve and reservoir, in what is being hailed as a giant Jurassic "mega-find." According to a press release from the Leicestershire and Rutland Wildlife Trust—which operates the nature reserve in partnership with owner Anglian Water—the colossal 180 million-year-old skeleton is the largest and most complete ichthyosaur fossil ever found in the UK. Measuring nearly 33 feet in length and with a skull weighing approximately one tonne, it is also thought to be the first of its particular species, Temnodontosaurus trigonodon, to be found in Britain.

BREAKING LOCAL NEWS!
On our hourly news from 6am and Rob Persani's chatting to Joe Davis from the Reserve after 8am!
Britain's most complete skeleton of an ichthyosaur has been discovered @RutlandWaterNR
This 10 metre long 'Sea Dragon' would have lived 180 million years ago. pic.twitter.com/ReRFhfF1tX

Ichthyosaurs, which resembled dolphins in body shape, are said to have lived alongside the dinosaurs during the Jurassic Period. After first appearing 250 million years ago, they went extinct 90 million years ago and were first discovered nearly 200 years ago on the Jurassic Coast in the south of England, reports NBC News. The newly discovered skeleton of the marine reptile was reportedly first uncovered in February last year in the Rutland Water Nature Reserve by Joe Davis, a conservation team leader from Leicestershire and Rutland Wildlife Trust, while undertaking routine re-landscaping work, which involved draining the water in the lagoon.

I’d also like to thank @AnglianWater, @RutlandWaterNR, @LeicsWildlife and @rutlandcouncil, especially Joe Davis, Joelle Woolley, Jake Williams, Claire Hornsby, Robert Clayton and Ari Volanakis for all of their hard work and enthusiasm in helping to make this happen! pic.twitter.com/QWS080vhbm

"Joe and Reserves Officer Paul Trevor set off across the lagoon when Joe noticed what looked like clay pipes sticking up out of the mud," the press release states. Speaking of the discovery, Davis revealed that he decided to take a closer look because "they looked organic. I worked out on the Hebrides, so I've found whale and dolphin skeletons before. This appeared similar and I remarked to Paul that they looked like vertebrae. We followed what indisputably looked like a spine and Paul discovered something further along that could have been a jawbone. We couldn't quite believe it," he added. "The find has been absolutely fascinating and a real career highlight, it's great to learn so much from the discovery and to think that this amazing creature was once swimming in seas above us, and now once again Rutland Water is a haven for wetland wildlife albeit on a smaller scale!"

The fossilised remains of Britain’s largest ichthyosaur, colloquially known as a ‘Sea Dragon’, has been discovered at Rutland Water Nature Reserve. It is the biggest and most complete skeleton of its kind found to date in the UK!

Aside from its incredible size, the fossil was also notable because it was unearthed outside of the areas on England's southern and Yorkshire coasts where ichthyosaurs have previously been found. In contrast, the one found in the Rutland Water Nature Reserve was uncovered in a landlocked county around 100 miles north of London, which was covered in a warm tropical sea during the Jurassic Period. The fragile remains of the ichthyosaur were carefully excavated in August and September last year by a team of expert paleontologists assembled from around the UK, led by world ichthyosaur expert Dr. Dean Lomax and specialist palaeontological conservator Nigel Larkin.

The remains of a 'sea dragon' longer than a double decker bus unearthed at Rutland Water are being hailed as the biggest ever found in Britain.

Joe Davies, who works there, tells #BBCBreakfast how he discovered it ⬇️https://t.co/DoIdhJnLMY pic.twitter.com/AM4GJ3ZTBl

"The first ichthyosaurs found in the Jurassic Period were a couple of meters long, between five and 10 feet, whereas this ichthyosaur, and others that have been found but are less complete, are the first that are real Jurassic giants," said Lomax. "It's an interesting way of looking at the historic evolution of ichthyosaurs. It's the most complete and larger than any dinosaur skeleton ever found here, so it's a mega-find for so many reasons. During this time period, it would have been right at the top of the food chain. It’s an ultimate apex predator, perhaps one of the biggest animals in the sea worldwide." Speaking to CNN, he said the discovery was only the "tip of the iceberg," as they still have much left to uncover of the specimen once chunks of rock have been cleared away. There is a chance that the ichthyosaur's last meal may have been preserved or even that the reptile was pregnant.

"It was just mind-blowing," Regan Harris, a spokeswoman for Anglian Water. "I mean, you kind of couldn't really believe your eyes when you were looking at it in front of you. But yeah, incredible." The fossil is currently being treated by a specialist paleontological conservator—a process that will take 12-18 months—following which, they hope to put it on public display, said Harris. "We're very proud of it, and I know the local community are as well," she said. "We very much want to bring it back home to Rutland and have it on display for people to enjoy."