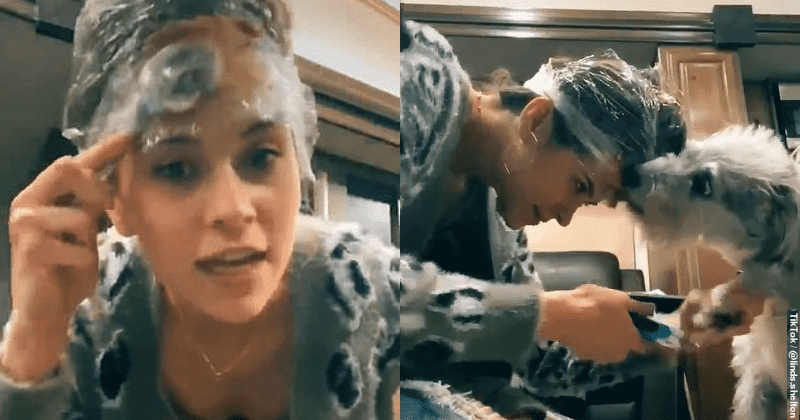 It's one thing to keep a dog occupied by getting them excited, it's another thing to make them sit quietly for a few minutes without moving around. Surely, the latter is a test of patience as most pet owners can attest to, especially when it comes to clipping your pets' nails. Nurse and dog owner Linds Shelton from California took to TikTok to show off her brilliant idea, Daily Mail reported. Her method is quite strange on the first appearance, but as with most quirky techniques, the results speak for themselves! With her ingenious trick, you can easily trim their claws and groom them at home while they are distracted. All you have to do is wrap your head in cling film and smear it with peanut butter!

The ICU nurse from Pismo Beach, California, depicts exactly that on the video posted on her TikTok account. The clip is captioned "need help clipping your dogs nails? I gotchu" as the dog owner proceeds to wrap cling film around her head. She then dunks a spoon into a pot of JIF peanut butter and spreads it all over her forehead. She then goes on to say, "This peanut butter does not have Xylitol before you all freak out." Xylitol is an artificial sweetener that is often used in foods to keep the product sugar-free but is toxic to dogs, even in small amounts.

She continues to talk into the camera and a man in the background who sounds rather confused by all this. He can amusingly be heard saying "what the hell are you doing" as Shelton laughs. She turns the camera over to show his perplexed face. The man then calls her a dork to which Shelton responds by saying: "Oh I look like a dork, I'm about to look like a genius." The video then cuts to the happy pet owner kneeling in front of her grey-haired dog Schmidt with the wrap around her head and claw clippers in hand.

As she lifts the dog's head towards the peanut butter, her furry pal notices it and promptly begins to lick it off, forgetting about the claw clippers. The dog is so consumed by the sweet peanut butter in front of its face that it literally doesn't notice as she picks up its paw while talking it to and starts to clip away saying, "Oh that's good stuff".  While that's going on, her other wirey-haired dog Murphy watches on and appears keen to get involved in the doggy pedicure session. Shelton goes on to state that she had never thought of or tried this trick before but just knew it would work because her dog is a foodie.

According to Metro, after posting the video on Tik Tok, her innovative trick has been widely praised by netizens. Many of them commented stating that they even wanted to nominate her for a 'dogtorate' in dog training while another claimed that she should even run for president. Another appreciative Twitter user shared a video of her trying out the hack with her dog and said: "Thank you!!! I’ve bought three different tools and tried to bribe her with treats. This is the only thing that’s worked with her."

I had a live feed on my business page today and kinda ranted to not do that....

But some users on Twitter also went on to criticize this technique citing safety concerns. Dogs are allowed a small amount of peanut butter as long as there is no xylitol in it. Dog owners are always advised to carefully check the jar's label for the compound and to call the vet immediately if your pet does ingest xylitol.

I hope all the dog owners doing the peanut butter head wrap/nail clipping challenge are making sure the PB doesn’t contain Xylitol, which can make dogs severely ill.