Indy Mellink created a new deck of cards after realizing the sexist hierarchy while explaining the rules of cards to her cousins. 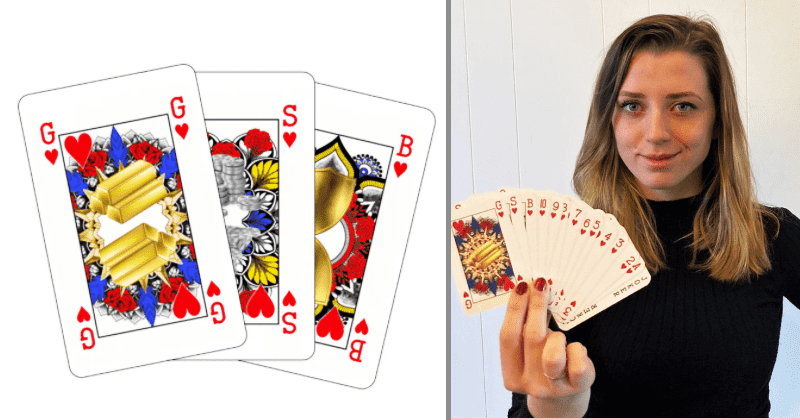 A forensic psychology graduate has created a new set of inclusive playing cards by removing kings, queens, and jacks. Indy Mellink, 23, felt the existing popular deck of cards reflected 'subtle inequality' with the King being more valuable than the Queen. Mellink said the inequality hit her only when she explained the rules of the game to her cousins, and she was bothered by it. Indy Mellink, who hails from the Netherlands, wanted to design her own deck of cards that eliminated hierarchy, race and is more inclusive. Mellink was encouraged by her father as well to improvise on the standard deck of cards, reported The Daily Mail. "If we have this hierarchy that the king is worth more than the queen then this subtle inequality influences people in their daily life because it's just another way of saying 'hey, you're less important," said Mellink.

The 23-year-old replaced Kings, Queens, and Jacks with gold silver, and bronze cards in the newly designed cards. She has titled them "GSB cards," referring to Gold, Silver and Bronze. "Even subtle inequalities like this do play a big role," said Mellink. It also shows why she didn't realize the inherent inequality until she had to explain it to cousins, who probably hadn't accepted the everyday inequalities presented to us. She did wonder if they'd catch on but the first 50 packs she designed were snapped up by friends and family members in no time. She then went ahead and created more decks and started selling them online. She has now sold close to 1,500 packs of the newly designed deck of cards in various countries including Belgium, France, Germany, and the United States.

"The idea is to remove gender hierarchy and race differences from our card decks. Why should the King have a higher position than the Queen? Why should the King, Queen, and Jack be white? However, rather than complicating the sex and race inequality debate, even more, we decided to remove the gender and race factor as a whole and to introduce a common, universally known ranking system," read a statement on GSB's website.  "All the other cards in the deck are the same as usual. This card pack was designed with the passion to fight for equality in gender as well as race. Our goal is for everyone to feel comfortable while playing cards." The version of playing cards designed by Indy Mellink is black and red, and is also eco-friendly. All the cards are also mirrored. Indy Mellink also designed a new card game called Medals, instructions for which can be found inside the GSB deck of cards.

“I would really like to stress that I do not wish to polarize people and take away something. I was raised by my mom to always consider my choices and look for alternatives outside of the box. That is why I wanted to design something more inclusive,” said Indy, reported Bored Panda. "These GSB Playing Cards were designed with the passion to fight for equality by removing the focus on the sex and race-inequality debate from a place where it does not belong."

Being a forensic psychology graduate, she was intrigued to see the effect the new cards would have on those who had been conscious of sexual inequality in cards. She has been testing them out on card players to gauge their reaction to the changes she's made. Berit van Dobbenburgh, head of the Dutch Bridge Association said it was an important step that highlighted the gender inequality in playing cards, which is very common in homes. Dobbenburgh believes it would be difficult to make a formal switch because the new cards would require official rule changes. "I wonder if it's worth it. But gender neutrality, I am all for it! It's great that someone of this age has noticed this. It's the new generation," she said. You can buy the set of cards from here.