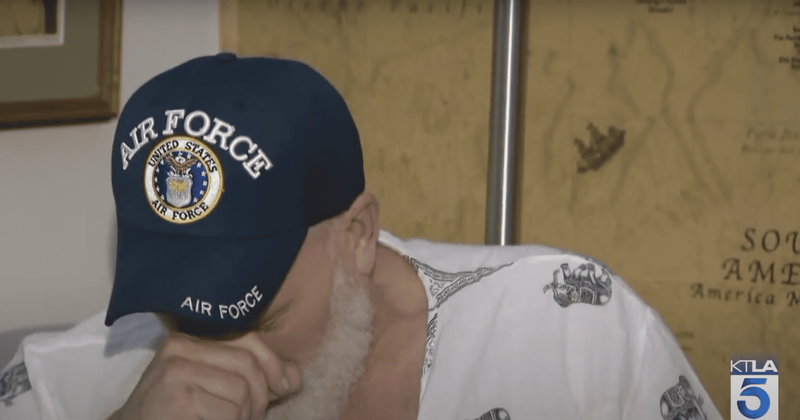 A San Pedro resident and Air Force veteran, Ryan Gierach, claimed that his neighbors have had a long history of discriminating against him because of his sexuality. The openly gay veteran moved into the neighborhood a few years ago and had been the target of abuse ever since, he said. While initially, they called him anti-gay slurs, things escalated after he began hanging LGBTQ Pride flags during Pride month. "When I came here my neighbors directly across from me began calling me names — all of them revolving around gay epithets," he told KTLA 5. Gierach claimed that his neighbors have yelled homophobic slurs, and thrown garbage at him. He said they even physically assaulted him. He apparently even captured video of three women jeering at him, and one of them spitting at him. Someone even posted signs, calling him a pedophile, he said.

The Air Force veteran said he is used to discrimination. In 1979, he was discharged from the Air Force for being gay and later worked as a journalist. "For 20 years now I've covered this sort of thing happening to other people," he said. "And it hurt me deeply every time it happened to other people." Nothing could have prepared him for experiencing it first-hand, he said, breaking down crying. "To be attacked for being a loving person is perverse," he said. But thankfully, some kind neighbors have stepped up to support the veteran. "It's a sad situation, and we're not going to let it happen, because if you mess with one of us you mess with all of us," neighbor Aiden Garcia-Sheffield said.

San Pedro raises rainbow flag in show of support for Air Force veteran and gay rights activist who was the victim of a hate crime last week. Ryan Gierach is hoping the love of the community will get the hate of some of his neighbors to stop https://t.co/bpo8Hx9Jqa pic.twitter.com/dxFQ9SwHc7

According to CBS Los Angeles, the community of San Pedro stood in solidarity with the gay rights activist. Councilman Joe Buscaino led the charge where a few San Pedro residents and community leaders raised a pride flag in Gierach’s honor. “We are a town, we are a city that’s inclusive, that regardless of who you love, how you love, how you pray, what you look like, or how you live, that we are welcoming to everyone here in San Pedro,” Buscaino said. Gierach pointed out, “This is not about me, this happens every day in every place in this nation."

Back in 2010, then-President Barack Obama signed a landmark law allowing gay people serving in the military to be open about their sexuality. Obama repealed the "don't ask, don't tell" law that prevented openly gay people serving in the US armed forces, reports the BBC. However, Trump revived the discrimination against military personnel who were part of the LGBTQIA community with his transgender military ban. Last year he said that the ban was based on financial reasons, and not prejudice against people who are transgender. The BBC stated that Trump announced the ban on transgender people joining or being a part of the US army in 2017. This meant trans people who were already serving in the military had to leave. Charlotte Clymer, a Former member of the US Army, said at the time, "As a military veteran and transgender American, I am heartbroken. This is a hateful and cowardly policy based on the terrible reasoning of a White House that has spent the past two years constantly seeking to harm transgender people. There is no excuse for this."

President-elect Joe Biden has previously promised to reverse Trump’s ban on trans service members on his first day in office, reports Pink News. The outlet also reports that Trump's "needless" ban impacted morale among trans service members based on a new study. “The transgender ban has harmed military readiness across the board,” said Alan Steinman, a former US Coast Guard director of health and safety and retired rear admiral. Steinman is one of six authors of the new study, who continued to say, “That’s what happens when the military needlessly discriminates against people who are qualified to serve.” An unnamed trans-Navy aviation electronics technician told the study’s authors, “Before the ban, the Navy’s stance was that transgender people are real people and they have a status and we’re going to help them transition to what they need to be so they can continue to serve. But now that the ban has been reinstated, there’s no longer anyone trying to accept us anymore.” Meanwhile, trans service member Alivia Stehlik, an army officer at Fort Carson in Colorado, said of the ban, “It’s telling the world you don’t care about soldiers. Let us do our jobs, and if we can’t meet the standards, then we need to leave. But the standards shouldn’t be different for us.”