TikToker Selia Brookes' grandmother can be heard muttering while she denounces "foul spirits" and "lying spirits" as she touches the bedroom door. 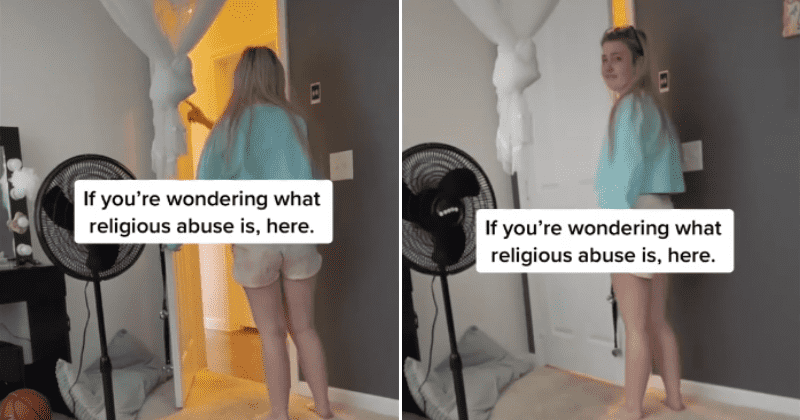 Trigger warning: This story has details of homophobia, and suicide ideation that readers may find disturbing

Homophobia is still rampant in many religious circles. It is labeled a "sin" and further marginalizes the people of the LGBTQ+ community. This is only further propagated when religious institutions like the Vatican makes proclamations stating that they will not bless same-sex couples. The ruling even states that the decision was "not intended to be a form of unjust discrimination, but rather a reminder of the truth of the liturgical rite," as reported by Reuters. But this has an adverse impact on the labor the LGBTQ+ community put into educating people, setting them back by years, forcing them to start from square one.

Recently, a TikTok user uploaded a video of her grandmother trying to exorcise her gay granddaughter’s room. The video has gone viral and has over 666k views. A caption on the video reads: "If you’re wondering what religious abuse is, here." In the video, TikToker Selia Brookes' grandmother can be heard muttering while she denounces "foul spirits" and "lying spirits" as she touches the bedroom door. "Satan, I rebuke you, in the name of Jesus, in the name above all names!" she says as she draws crosses with her fingers on the room door. "Praise you, Jesus!" She then walks away as a dejected Brookes looks back to the person recording the video.

The TikToker says that she’s "gay, gay, gay" in her bio. In the video description, she has used the hashtag "emancipation" probably suggesting that she is considering moving out of her home and legal separation from her family before she’s 18. Users who watched the heartbreaking video left worried comments as well as kind words under the video. One person wrote, "There's no hate like Christian love." Another user commented, "As a Christian, I'll never understand how they think this is okay. This is the complete opposite of what God stands for."

The video was also shared on Twitter by user Marjorie Gaylor Queen who wrote: "Anti-gay Christian mother exorcises the door molding of her daughter’s room." Twitter users were concerned about Brookes as well. One person commented, "I grew up with people like that in my family. They never get better only worse. I hope that that young lady is able to get away from her mom into a safe nurturing environment." Another tweet read: Religion is inherently abusive. It arrests critical thinking and poisons the well of intellectual debate by telling people that magical bullshit is an acceptable conclusion. The video on Twitter also racked up over 23k views.

In a follow-up video, she shares the harsh words her grandmother says to her and her girlfriend. It is in this video that she clarifies that the woman is her grandma, not her mother, according to the Daily Mail. In the video, the woman can be heard rambling indistinctly about Brookes turning 18 and how the couple is "blood-sucking leeches." Brookes responds by saying, "She is picking up her stuff and heading out. I just texted my mom about it. Why are you being that way?" Brookes uploads videos with her girlfriend, Mj Williams on TikTok.

A study published in the American Journal of Preventive Medicine found that there was an association between the "importance of religion and recent suicide ideation." Co-author of the study John R. Blosnich told Huffington Post, “Religious groups who stigmatize LGBT people should be aware of the potential damage they can do to an individual and families, and honestly the damage they do to themselves as an organization." The study urged that "religion-based service providers should actively assure their services are open and supportive of gay/lesbian, bisexual, or questioning individuals."