A Gay Couple Found A Baby Boy Abandoned On The Subway, And Now He's Their Beautiful Son

Social worker Danny Stewart and his partner Pete Mercurio were not expecting their lives to change back in August 2000. 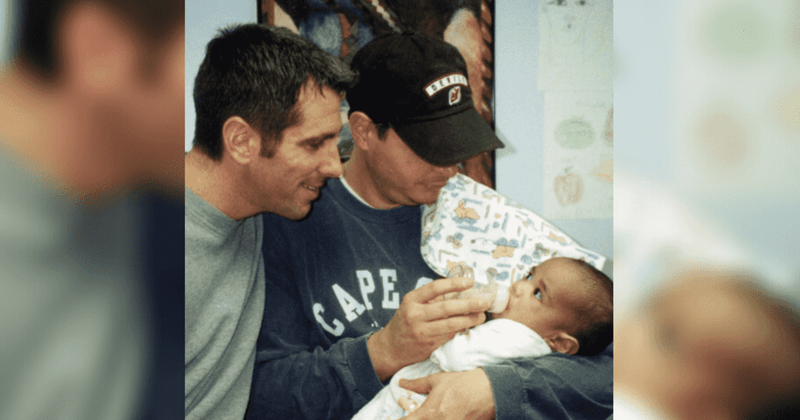 What would you do if you spotted a sweet, innocent infant on the subway station? Not many people would have a big enough heart to take the baby in and raise them on their own, but Danny Stewart and Pete Mercurio did just that! On August 28, 2000, little did they know that their lives were about to completely change. When Stewart was on his way to meet his partner, he was surprised to see something on the floor of a New York subway station. Mercurio tells Shared, "At first he thought it was a baby doll on the ground. But then he saw the legs move and realized it was a real baby. For him, time stopped, and he was in disbelief and shock, but he knew he had to act, so instincts took over, and tried to get help as quickly as possible. My first encounter was after I ran down to the subway station. A police officer was holding the baby right next to us. It was so surreal. And I couldn't shake this chill that ran up and down my spine as we both stood there and just stared at this little tiny miracle."

"He didn't have any clothes on, he was just wrapped up in this sweatshirt. His umbilical cord was still partially intact, so I could tell he was a newborn. I was thinking maybe a day or so old," Stewart told the BBC. Later the police took the baby to the hospital for a check-up and the two went back to their lives: Stewart was a social worker and Mercurio worked as a playwright and web designer. In 2000, Stewart attended a family court hearing to testify how he had found the baby, and that's when something incredible was about to happen.

The judge asked him if he could stay for the entire hearing, and her next question to him stunned him. "And then the next thing out of her mouth was, 'Would you be interested in adopting this baby?'" Stewart recalled. "I think most of the mouths dropped in the courtroom, including mine. I said, 'Yes, but I don't think it's that easy,' and the judge smiled and she said, 'Well, it can be.'" Stewart added, "I had not had thoughts of adopting but at the same time, I could not stop thinking that... I did feel connected, I felt like this was not even an opportunity, it was a gift, and how can you say no to this gift."

The baby boy who they named Kevin was 10 years old by the time the couple could legally marry when New York became the sixth state in the US to legalize gay marriage. Even more incredible was that their nuptials were officiated by Judge Cooper — the same judge who played a significant role in their adopting their subway baby. Kevin is now a 20-year-old college student and the family is closer than ever. Mercurio told Shared, "We've been really close-knit from the very beginning and still are."

Describing his son, he says, beaming, "Kevin is a person of strong convictions. He stands up for what is right. He's kind, empathic, and conscientious. He likes to challenge himself to figure things out on his own, so in that way he's very much a self-motivator. Kevin's a very private person. He keeps his feelings and emotions fairly well concealed, which people often mistaken for aloofness. But when he trusts you, he will open up."

The dad-of-one admits that despite this, Kevin "has a wicked sense of humor that will catch you by surprise, and make you fall on the floor laughing." He continues "He has enriched our lives beyond our wildest imaginations, and that's saying something because we never imagined being parents. We never knew this kind of deep, unconditional love existed until Kevin came into our lives."

Mercurio points out that the family has had incredible support throughout the years. "Danny and I credit our friends and family for helping to raise Kevin. It takes a village, and our village was with us all the way." He also advises other parents who are looking to adopt to "consider adopting a child from foster care. So many kids in foster care need loving and nurturing permanent homes. While the way we became a family happened fast, we know it is sometimes a much longer process and journey for other families looking to adopt. Be patient. Trust in the universe, your god, whatever, that there is a plan for you and your family."

Mercurio has even written a children's picture book about their family's story called Our Subway Baby. He shares, "I wrote it as a direct address to Kevin, almost like a love letter to him about how we became a family. It gave me such great joy (and some tears) writing the book and I hope it gives others that same feeling. The book is available anywhere books are sold." As for his husband, he says, "Danny's on the board of Second Nurture, an organization that helps to support communities and families looking to foster and adopt. Folks can reach out to Second Nurture for more information and support."