A 93-year-old woman facing the Camp Fire was rescued when her garbage collector showed up in his truck. He saved her and drove her to his childhood friend's house. 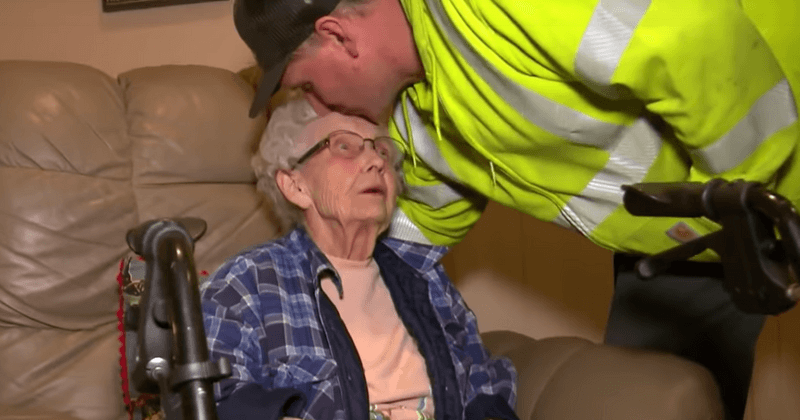 The fires in California this season have been the largest and most dangerous in history destroying over 10,000 structures and around a million acres of land in total. Margaret Newsum, 93, saw the reports of the fire on the news and realized that she had to evacuate as soon as possible as the fire was nearing her home. Her caregiver hadn't come in that morning and due to the disaster, there was no electricity in the house and the phone lines were down resulting in Margaret being trapped in the house and unable to even call for help.

The old lady quickly packed up all her medicines and other important things she needed and started to walk out of her home in Magalia, California, hoping that somebody would notice her and come to her help. Soon, Dane Ray Cummings showed up in a garbage truck to pick her up and drove her to safety. Even though there was a mandatory evacuation order sent out in parts of the Butte County where the fire was spreading, Cummings made sure that he went on his usual route to help the elderly and disabled people he knew in the area.

The California fires this season have killed somewhere around a 100 people and nearly 1,300 people are currently unaccounted for. 65 percent of the fire has been contained in Butte County as on November 19, 2018, but the fires have completely burned down 150,000 acres of land and over 12,000 structures.

“... Butte County contracted for a private warning system to alert residents in danger — if they had the foresight to sign up. The Paradise emergency operations director estimated no more than 30% of citizens were on the list.” https://t.co/JaoLBl3VMI

Around the time the fire broke out and evacuation orders were given in Butte County, Dane Cummings was on his usual rounds to collect garbage. He was told to cut his journey short and head home as soon as he could. He decided that he would take the usual route regardless of the fires as there were a lot of old and disabled people he knew who lived on his route and he wanted to check in on them and see if they had already gotten help.

To her luck, Cummings spotted Margaret walking outside on her front lawn. He knew they had to get out of there as soon as possible so he helped her get inside the truck. They weren't sure that the fire would reach her house, but if it did get over the hill close to Margaret's house, then she could have been in deep trouble. Cummings knew that she stayed with a caretaker but later found out that the caretaker wasn't around that day.

Camp Fire in Butte County and the Woolsey Fire in Malibu have been the biggest wildfires in California's history.

Read our latest post to learn more about the California fires:https://t.co/eP1v7PCYA1

Margaret suffered from a broken back around a year ago and used her walker to move around. She managed to pack up a few essentials and made it to the front lawn. She was positive she was going to get out of there but didn't know how until she saw a big green truck with waste manager Dane Cummings in the driver's seat approaching her.

He noticed 93-year-old Margaret Newsum stranded on her doorstep. She was recovering from a broken back and had no means of escape. https://t.co/P4zYiHwn2D

Cummings with the help of some neighbors lifted Margaret up and put her next to the driver's seat in the truck, and they strapped her walker to the side of the truck. With everyone trying to flee the county at the same time, it took them around five and a half hours to get to safety. Cummings mentioned that the smoke was jet black, it was worse than anything he had seen before. He said that "it was like going into the bowels of hell." when interviewed by CNN.

God BlessHim:💖💖💖Dane Ray Cummings, a garbage collector, was finishing his route in Magalia, California before evacuating the Camp Fire when he discovered Margaret Newsum, a 93-year-old woman who had no way to... https://t.co/wl7CigQzfe

After rescuing her, Cummings called up his childhood friend Brian Harrison and spoke to him about the incident because he didn't know where to take Margaret as he knew that an evacuation center wouldn't be the best place for her. Harrison heard him out and decided to let Margaret live at his place. He felt that was the right thing to do as she did not have any family members in the area.

Harrison is a single dad. His sister and his children agreed to help him take care of Margaret. She said that she felt like she was a part of the family and they never treated her like an outsider. After reading about the damage caused in California in the past couple of weeks, Harrison was told that it would take a couple of months before Margaret could return home and this news apparently excited his children a lot, as over the week they had grown to love her and wanted to live with her.

Dane Ray Cummings has been on that same route for eight years now and knew that there were a lot of elderly and disabled people on his route. He knew exactly where they lived as well and just wanted to stop and see if they needed any help getting out. He went to around 40 to 50 people to check on them and let them know that he's there to take them out, and that help was coming to the county.

He made sure they all had a proper plan in place to get out or were leaving when he arrived. He met Margaret at his last stop before evacuating the area. There have been reports of many people who have come to the help of others in this time of desperate need and such acts of bravery need to be acknowledged, encouraged, and rewarded.