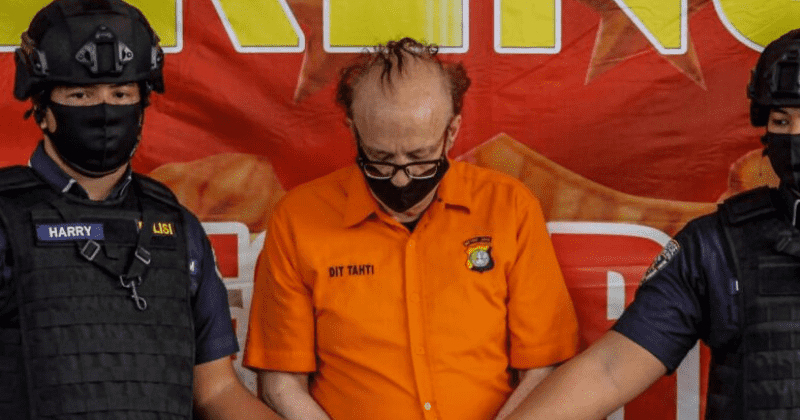 A French pedophile could face death by firing squad in Indonesia after he was held accountable for molesting over 300 children and even physically assaulting those who refused to comply with his sexual advances. According to DailyMail, Francois Abello Camille, 65, was arrested last month in a Jakarta hotel when he was found with two underage girls in his room. Camille now faces a firing squad or a life in prison if he is convicted of the horde of charges set against him, some of which include accusations that he filmed the acts. The sentence will be doled out in accordance with the Asian nation's child protection laws.

THIS IS HOW YOU HANDLE A PEDO....French 'paedophile' faces death by firing squad in Indonesia https://t.co/Kh0plb5c66 via @MailOnline

Police investigating the matter revealed that they found several videos on Camille's laptop which showed him taking part in illegal sexual activity with hundreds of young children between the ages of 10 and 17. Although a French national, the senior citizen frequented Indonesia several times over the last five years on a tourist visa, the police said. Speaking to reporters, Jakarta Police Chief Nana Dudjana said: "He would approach children and lure them by offering them work as models. The ones who agreed to have sex with him would get paid between 250,000 and one million rupiah ($17-$70). Those who didn't want to have sex would be beaten, slapped, and kicked by the suspect."

According to reports, video of Camille handcuffed with his head bowed down as he is being escorted by 10 Indonesian police officers has been found online. Police also announced that the pedophile may have molested Indonesian children for a few years now and that there could be a lot of victims people still don't know about. This comes amid a global anti-trafficking network, ECPAT International report that says as many as 70,000 children are subjected to sexual exploitation in Indonesia.

This is for all of you Lucerferian pedophiles, this is what death by firing squad looks like, and this event will become the norm in the near future! Just Sayin!

In a news release, Cranford said: "It has come to the attention of the District Attorney’s Office that members of the Troup County community are concerned and upset that Peter Mallory was recently released on parole. The District Attorney opposed Mr Mallory’s release but was powerless to stop it."

Another pedo bites the dust... well the bullet if you wanna be precise.
French pedo faces firing squad in Indonesia after molesting and beating 300 children.https://t.co/YsLiuU8b6B

Stating reasons behind the release and the parole, the statement said: "Mallory’s crimes did not allow for the State to seek or the trial court to impose a sentence without parole eligibility, and parole is a power exercised exclusively by the State Board of Pardons and Paroles."

Mallory was sentenced after he was found guilty of possessing more than 26,000 items of child pornography during a 2012 conviction. The early release means Mallory has served just 0.07 percent of his sentence. Cranford had previously sent a copy of the letter he wrote to the Georgia Court of Appeals to 11Alive where he'd urged the Parole Board to consider the tentative parole date.

Beautiful!! It would be lovely to let him spend some time getting prison justice first :-)

He said: "I respectfully write you to ask that you reconsider Peter Avery Mallory's tentative parole date of Dec 31, 2019. I sincerely believe Mallory is a threat to the public, has not sufficiently paid his debts to society, and I am opposed to his parole now or anytime in the near future. I also think Troop County community will be offended by his release after having served only seven years of his total sentence."

"While it may be consistent throughout the state for this board to parole certain persons convicted of these crimes after seven years, Mallory is a worse offender and his crimes are worse than the average possessor of child pornography," the letter said.

This needs to be instituted in America.