Another marine mammal paid the price for mankind's irresponsible consumption and disposal of single-use plastics. The carcass of a pregnant sperm whale washed up on the shores of a popular tourist spot in Italy. 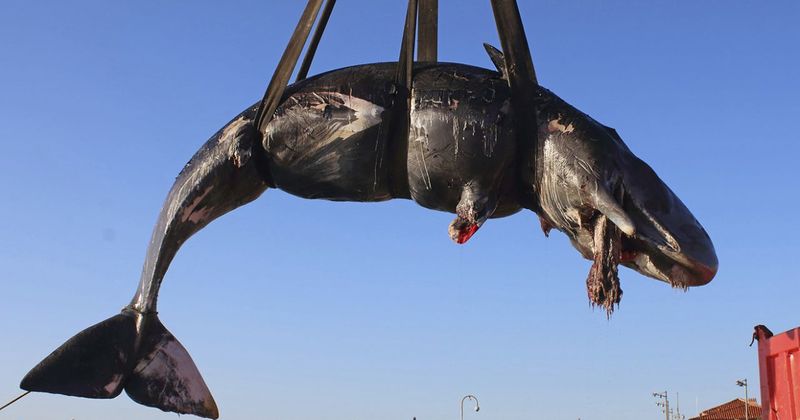 We've said this before and we'll say it again. Our careless consumption and disposal of single-use plastics pose a serious threat to the environment and while mankind will undoubtedly pay a hefty price for it soon, the major brunt of it is born by innocent creatures in the wild. Environmentalists have been tirelessly trying to raise awareness about this epidemic for years now and yet, we continue to turn a blind eye towards it. We've witnessed countless instances of magnificent marine creatures meeting a cruel and untimely demise due to plastic debris in the oceans, the latest of which washed up on the shores of a popular tourist spot in Italy.

Last week, the carcass of a pregnant sperm whale was discovered in Sardinia, Italy. According to CNN, a shocking 49 pounds (22 kilograms) of plastic waste was found in the deceased whale's stomach. The country's environment minister and a marine life non-profit organization further revealed that the marine mammal's fetus was dead inside its mother's womb due to the non-biodegradable material's presence in the whale's body.

Pregnant whale found washed up on the coast of Sardinia, Italy with 20 kilos of plastic waste inside its stomach, prompting renewed calls for international action to protect marine life and cut back on single-use plasticshttps://t.co/jZj9MxZhoJ

The president of the SeaMe group, Luca Bittau, revealed to the media company that the plastic waste found inside the whale's stomach comprised of "garbage bags... fishing nets, lines, tubes, the bag of a washing machine liquid still identifiable, with brand and barcode... and other objects no longer identifiable." He also stated that the whale fetus had undoubtedly been aborted long before the mother washed up on the beach.

☠ This is some of the trash that occupied 2/3 of the dead whale's stomach found off Sardinia, Italy:
- a corrugated tube for electrical works
- plastic plates
- shopping bags
- tangled fishing lines
- a washing detergent package pic.twitter.com/aeRvyGwbxR

"She was pregnant and had almost certainly aborted before (she) beached. The fetus was in an advanced state of composition," he said. The dead marine mammal's carcass was found on the shores of a beach in the Sardinian tourist hotspot of Porto Cervo. Although today many of us treat sights such as this one as an exciting Instagrammable opportunity, we must remember to take heed of the dark reality behind such deaths. Our carelessness has resulted in the death of not just one, but two, glorious marine animals who were unfairly denied the right to live due to mankind's blatant ignorance.

Marine pollution continues to threaten life under the sea and the latest victim of plastic dumped in the ocean has been a pregnant whale, which washed up on the coast of Sardinia, Italy. She consumed 20 kg of plastic waste. Humans destroying nature. https://t.co/W2L7t5VFgC

Italy's environment minister, Sergio Costa, shared the disturbing news in a Facebook post in the hopes of raising awareness about the serious threat our irresponsible attitude towards plastic pollution poses to these innocent animals. "Are there still people who say these are not important problems? For me they are, and they are priorities," he wrote in the post. Costa added, "We've used the 'comfort' of disposable objects in a lighthearted way in the past years and now we are paying the consequences. Indeed the animals, above all, are the ones paying them."

🐳Another #Whale Has Washed Up Dead, off the coast of Sardinia, Italy With 49 Pounds Of Plastic Packing In Its Stomach and a dead fetus. The trash included garbage bags, fishing nets and lines, tubes, and a bag of washing machine liquid https://t.co/FdL7pr0K5C via @HuffPostGreen

He also took the opportunity to call attention to a recently approved law by the European Parliament, which bans a wide range of plastic items of the likes of straws, cotton buds, and cutlery. This law is set to be completely implemented by the year 2021, which is only 2 years from now. Kudos to the authorities for taking such effective measures to counteract this concerning issue. Costa promises that Italy will be one of the first countries to enforce this law, effectively setting an example for all other countries across the globe.

"Italy will be one of the first countries to implement it. The war on disposable plastic has begun. And we won't stop here," he stated. The aforementioned law was supported by 560 Members of the European Parliament, while 35 leaders expressed their opposition to it. The first phase of the ban is expected to be implemented within the next few weeks, reports CNN. In addition to the ban, MEPs have also agreed on a target to collect and recycle at least 90% of plastic beverage bottle by 2029.

In a statement about the commendable ban, the European Commission's first vice-president Frans Timmermans, who is also responsible for sustainable development, said, "Europe is setting new and ambitious standards, paving the way for the rest of the world." This new move to fight plastic pollution came into place after the European Commission discovered that plastics make up more than 80% of marine litter, bringing about disastrous effects on wildlife and their habitats.

The European Parliament pointed out that due to the slow decomposition rate of plastics, its residue has been found in a number of marine species, including fish and shellfish, which are consumed by humans. It, therefore, finds its way into our bodies as well, leading to health concerns. Hence, despite the ignorance we portray towards this matter now, its way past time that we take notice and spring to action before its too late for every living organism on this planet.