Jimmy Carter, Oldest Living Former US President, Turns 95 Today. You Can Send Him Your Message

The Carter Center, a not-for-profit organization founded by Jimmy Carter and former First Lady Rosalynn Carter in 1982, is encouraging people to send in their birthday wishes to celebrate with the oldest living former US president. 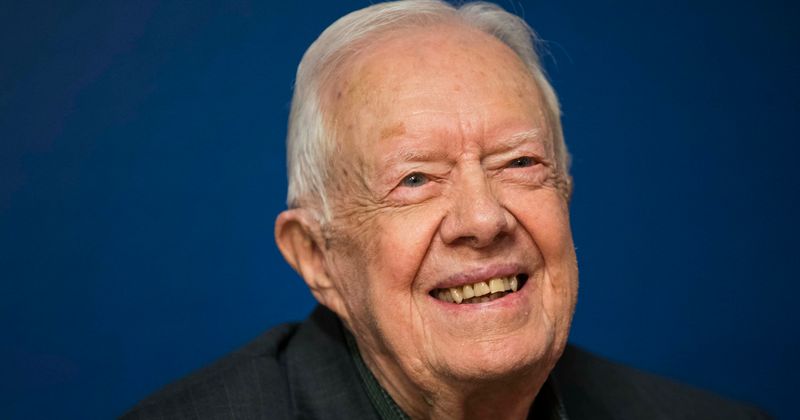 It has been a rough ride for former US President Jimmy Carter in the last few years. Battling life-threatening cancer in his liver and brain for almost four years, Carter has had hip surgery, intense therapy sessions and whatnot. However, at 95, Jimmy Carter is still thriving and looks like there is no stopping him.

And on October 1, Carter is celebrating his 95th birthday and you can actually send him your very own personal wishes to the iconic former President.

If only we’d listened to Jimmy Carter on renewables, consumption, and transportation. https://t.co/7Rs5ufnhDe

This has been made possible thanks to The Carter Center, a not-for-profit organization founded by Carter and former First Lady Rosalynn Carter in 1982. The organization is looking forward to people sending in their birthday message to celebrate with the now oldest living former president.

It is very easy, all you have to do is visit Carter Center's website and just submit your details and your birthday wishes.

HAPPY BIRTHDAY EVE to President Carter! Jimmy Carter turns 95 on Oct. 1. Leave your personal birthday wishes for him here on this wall. https://t.co/cvXIu5COn0

Recently, Carter was also in the news after becoming a distinguished professor at the age of 94. He is now a tenured faculty member of Emory University, Atlanta, having taught at the university for 37 years, reported CNN.

"With this honor, he becomes the first tenured faculty member at Emory to hold a Nobel Prize and the first tenured faculty member to have been a US president," said Emory University in a statement. "The principle undergirding tenure - which essentially means a continuous post as a professor - is to preserve academic freedom for those who teach and pursue research in higher education."

He was appointed as a tenured professor to teach across all four schools -- Emory College of Arts and Sciences, Oxford College, Candler School of Theology, and Rollins School of Public Health.

Jimmy Carter is the oldest living former US President and before him, late former President George H.W. Bush held the record at 94 years and 172 days old.

Carter was known for his speeches including the ones where he wanted the US to end all wars. Subsequently, he awarded the Nobel Peace Prize in the year 2002.

"War may sometimes be a necessary evil. But no matter how necessary, it is always an evil, never a good. We will not learn to live together in peace by killing each other's children.”