Former Anti-Masker Now In ICU For COVID-19: 'Take It Seriously, I Don't Know If I'll Survive'

Chris Grailey, 29, thought he was "invincible", didn't heed warnings about the coronavirus, and didn' wear a mask. Now he wants others to learn from his mistakes. 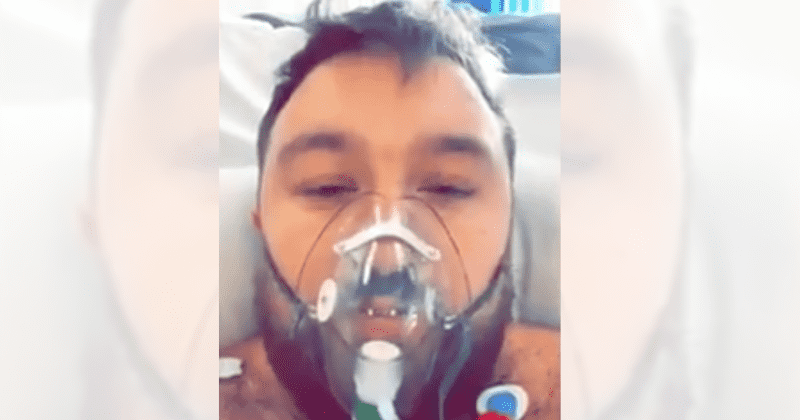 Almost every country in the world is slowly opening its economy back up after over six months of lockdown and other containment measures, despite the continuing rapid spread of the coronavirus. However, many people are vehemently opposed to wearing masks, either because they believe that the virus is a political hoax or find wearing masks too inconvenient and uncomfortable. One such individual is this 29-year-old man from Manchester, England, who, unfortunately, is experiencing grave consequences as a result.

A coronavirus victim has issued a plea from his intensive care bed - pleading with young people to take the virus seriously. Chris Grainey from Manchester caught the virus while on holiday in the Tenerife. He ignored warnings, not believing the virus was a threat. pic.twitter.com/3rIAFQqPA4

According to Manchester Evening News, Chris Grailey was on a vacation in Tenerife, an island in Spain, when he contracted the virus, before returning home to Watford and becoming sick soon after. He had to go to the hospital twice before finally being taken into the COVID ward for further treatment. Currently, he is on oxygen 24 hours a day as he's unable to breathe on his own. Like a vast majority of anti-maskers, Grailey too thought that he was "invincible" and even said on Facebook that the virus was but "all bullsh*t" and “bad flu”, and that it wasn't something he would get because he was young and healthy. However, he seemed to have learned from the error in his ways, albeit too late. "I paid the price," Grailey said. "I’ve got no underlying health issues. I don’t want anyone making the same mistakes as me. Now I’m in intensive care, waiting to get more treatment, and not knowing if I’m coming out the other side."

Grailey then shot a warning to all those who shared the same beliefs he once did. "So I really want you to take this message on board because it could happen to anyone. Please, please take care." He spoke to the outlet and even shared a detailed view of how his journey has been, revealing that the condition initially started as cold sweats and gravitated to loss of taste and smell. "I was rushed in Sunday morning for tests and scans and sent home on the Sunday night thinking I was ok," he said. "I was then rushed in again Tuesday morning straight onto a COVID ward."

Awful comments on here - takes no effort to have a little empathy. Wishing you a full and speedy recovery x

Some of the people commenting on Grailey's story were under the impression that he was parroting off talking points or that he wouldn't be able to talk if he was indeed in an Intensive Care Unit like he said he was. In a tweet where his video was posted, a user named Neil Harrison wrote: Almost like he’s been told what to say to the camera “I've got no underlying health conditions” people don’t talk like that. He might say something like “ as far as I know I’m fit and well.” Robert in Preston wrote: The data says otherwise. There is an infinitesimally small risk to younger people. This guy is just one of the unlucky few in his age group.

Meanwhile, Grailey didn't shy away from the point he was making and continued to express his thoughts. As per Daily Mail, he said: "This is REAL. It's real-life killing me. So before you think about going to house parties thinking your invincible getting off your heads sharing £10 notes, look at that picture and imagine it could be you. It can get anyone, I'm 29 with no underlying health conditions. This is serious s**t. Please please wake up guys. There's more to life than this. Life is too short to risk your health I have learnt the hard way I don't want people making the same mistakes I have."