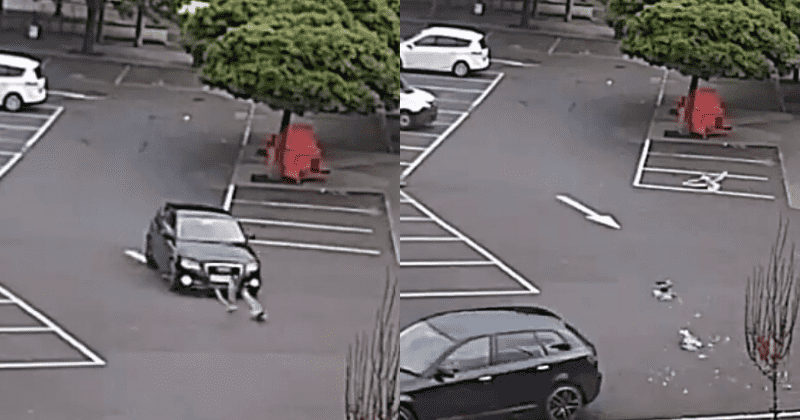 Trigger Warning: The story has footage and details of animal cruelty that readers may find disturbing

In a shocking video from the UK that was released online, a pair of young seagulls were seen being hit by a car, leaving behind a trail of maimed birds and piles of feathers in Kent. The video from surveillance cameras of the incident seemed to indicate that the disturbing act was deliberate.

The Royal Society for the Prevention of Cruelty to Animals (RSCPA) has also condemned the incident while asking people with any information about the car to come forward and help them nab the driver. The video also caused widespread anger online with people demanding that the cruel driver be found and punished. According to a report in Daily Mail, the incident took place at a car park in Folkestone, Kent.

In the footage, one can see the young birds on the ground as a black car makes its way towards them. There are two other adult seagulls as well, but they managed to fly away. The two younger ones were not so lucky.

As the car comes towards them, one of the birds attempts to fly away at the last minute. Unfortunately, the direction it flies off to get out of harm's way is the same way the car also turns. It comes under the car. The other baby seagull does not even realize that the car is approaching and comes under its wheels. Feathers from the birds are strewn all over the place as the car makes a turn and goes away. The birds lie lifeless on the ground. It is not known if they died or just badly injured by the hit. The other two adult seagulls hover above the car park as it drives away.

Sickening absolutely disgusting people like that should be held responsible for there actions.

From the video, it appears that the driver's act was intentional and this is one of the things that the RSPCA officials are also trying to determine. The car does not slow down at all as it approaches the birds. What is also more suspicious is that at the beginning of the footage, the car stops for a while as though waiting and watching for the birds.

This is also what one Twitter handle Dr Paula Owens FRGS pointed out: Looks like the parents flew straight down to see what was happening too, horrible& unnecessary act - looks deliberate given speed & space to avoid collision. Unchecked, random acts of cruelty to nature grow & establish unpleasant norms.

In fact, a lot of other people saw the incident as deliberate. peterfernandon  wrote: deliberate as the driver accelerates as he turns the corner. a car would need to slow down as it approaches the corner.

Shocking moment motorist drives car straight over pair of baby seagulls leaving behind a pile of feathers
via https://t.co/pMqJtrDQVq Hope they catch this cretin, no need to have killed them https://t.co/DMsBlyje9a

Another commenter Nicola@nih58 highlighted: If this driver can do this to baby animals and get away with it what stops them from moving onto humans?? Dont know why society normalises violence towards animals.

"This is very upsetting to see.  This has not been reported to the RSPCA but we would urge anyone with any information regarding this incident to call our national cruelty line on 0300 1234 999," said a spokesperson for the RSPCA: The Daily Mail article highlighted that seagulls were protected under the rules of the country. The clause of protection came under the Migratory Bird Treaty Act of 1918 and it is illegal to kill them.

You can see the vehicle waiting in the background. When the 2 young gulls move closer together the vehicle accelerated to impact. The speed to is clearly careless driving falling well below that of a competent driver.

We had recently reported a spate of attacks on birds across Britain. Take the case of this mother swan who had laid six eggs at a Manchester park but died of a "broken heart" after vandals destroyed most of her eggs before they hatched.  A group of teens threw bricks at the nest of the swan, smashing three of them. Sometime before this incident, there were reports of a jogger who kicked a young cygnet in Richmond Park in south-west London, inflicting the tiny bird with considerable brain damage.