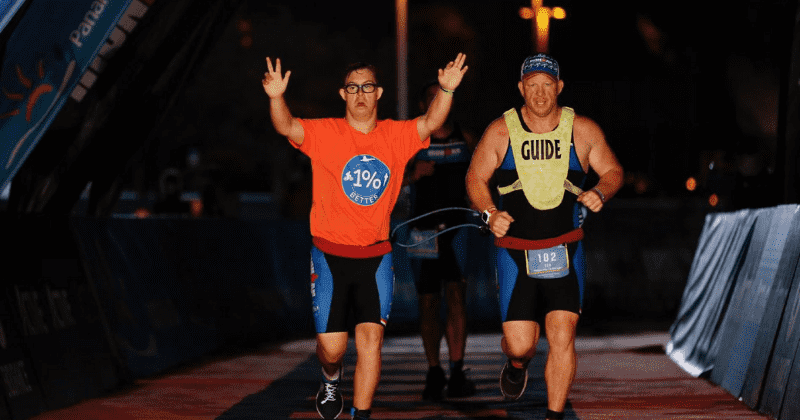 A 21-year-old man from Florida has just made history being the first person with Down syndrome to complete an Ironman triathlon. The famed marathon course includes a 2.4-mile swim, a 112-mile bike ride, and a 26.2-mile run in a single day. Chris Nikic who has Down syndrome had been contacted by The Special Olympics who connected him with Ironman competitor Dan Grieb, who helped train him. According to Florida race officials, Nikic had to be tethered to Grieb in the ocean on Saturday for safety reasons. Grieb also rode behind Nikic on the bike course and stayed near him on the run. But Nikic did all the work on his own, the Orlando Sentinel reported.

Chris Nikic became the first person with Down syndrome to complete an IRONMAN. Incredible 👏

Chris' father Nik Nikic said that his son really wanted to do triathlons, and eventually, become an Ironman.  “I realized, ‘Why not? Why can’t he do an Ironman?’” Nik said. “So I gave him a piece of paper ... and I said, ‘Why don’t you write down your dreams? Tell me what you want out of your life.’” "Become a homeowner, buy a car, marry a pretty blonde like his mom, and complete an Ironman," he wrote. Chris had completed a practice, half-triathlon earlier this year in 8 hours, 25 minutes. “The doctors and experts said I couldn’t do anything,” Chris said in the days leading up to the competition, which was held in Panama City. “So I said, ‘Doctor! Experts! You need to stop doing this to me. You’re wrong!’”

The Ironman Florida Facebook page had been following his progress throughout, and there were many fans leaving messages of support to cheer him on.  “You have shattered barriers while proving without a doubt that Anything is Possible!” Ironman Florida posted on its Facebook page. “We are beyond inspired, and your accomplishment is a defining moment in IRONMAN history that can never be taken away from you,” Ironman Florida wrote. “Thank you for allowing us to be a part of your remarkable life story and we can’t wait to see what you achieve next.” “A year ago I wrote ‘Chris World Champ,'” Nikic said on social media Sunday. “Anything is possible.”

Chris is proving Anything Is Possible. Let the world know that something amazing is happening right now by using #onepercentbetter and #ChrisNikic. Let’s get him trending! pic.twitter.com/5q2zpPLelf

Dan Grieb, meanwhile, had been training Chris for about a year to prepare for the race.  "One of the most magical things that has happened to me is that I’ve been able to be introduced into this world,” Grieb told WEAR. “In this world, I’ve learned that a hug can solve a lot of problems and some of the greatest among us are labeled with words like disability. His competitiveness is an inspiration to others." “Dad wanted me to be happy and be included and be around other people,” said Chris Nikic. “We picked triathlon so we could get in shape together. Triathlon races are so much fun and the people are so amazing.” “We came up with this concept of just get a little better today than yesterday,” said Nik. “We made it a permanent habit, a lifestyle habit, that he’s going to do for the rest of his life.”

“Because this is a first for us, we had to work out some logistics,” said Beth Atnip, Ironman’s vice president of global operations. “But I’ve met Chris, and he is so impressive. His heart is so big. And I think this will open doors for a lot of other folks who maybe just thought it was impossible.”

“Congratulations Chris on becoming the first person with Down syndrome to finish an Ironman. You have shattered barriers while proving without a doubt that Anything is Possible,” race officials said on social media. “We are beyond inspired, and your accomplishment is a defining moment in Ironman history that can never be taken away from you. You swam 2.4 miles, biked 112 miles, and ran 26.2 miles and now you get to brag for the rest of your life.”