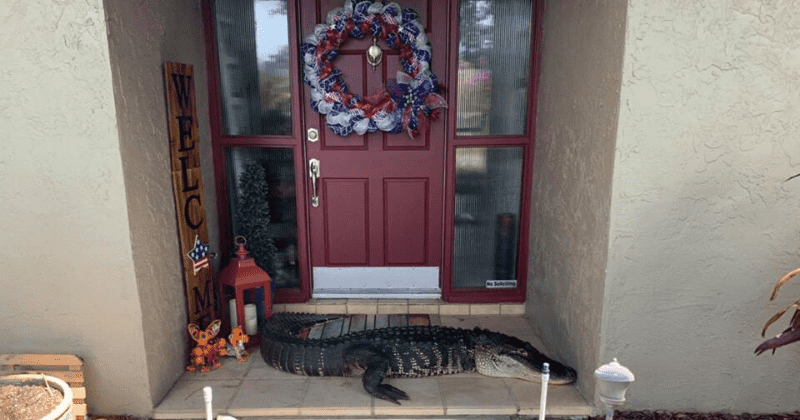 When this family in Florida stepped out of their house during the early morning hours on June 30, a terrifying surprise was awaiting them. They found a massive alligator who had decided to claim its territory at their front door and made itself comfortable, reports CNN. The huge reptile was seen resting on the Tampa house's doorstep according to a local wildlife sanctuary, Croc Encounters. Posting on their Facebook page, the animal welfare group said that they responded to an "emergency alligator call" that morning and discovered that an 8-foot 9-inch reptile was laying on the doorstep. "Despite [the family's] efforts to get him to move, he refused to leave. He was not too happy to be evicted from his comfortable, shady spot as he smashed everything in sight upon exiting." As news spread locally about the unexpected visitor, crowds gathered to get a first-hand sight of the beast, as alligator trappers Karina Sura Paner and John Paner stepped in  "before someone got hurt."

The group posted photos of the alligator lying on the doorstep and the after-photos showed the doormat and the decorations that were knocked over by the oblivious guest. When the rescuers stepped in to move it away, they found that it was missing two limbs, most likely due to a fight with another alligator. Meanwhile, residents in the neighborhood did what they could to protect unsuspecting delivery drivers from walking right into the alligator by plastering warning signs visible for all to see. "Delivery stop! Leave packages here! Alligator at front door!! (seriously)," the message read. After much hard work, Croc Encounters did manage to rescue the animal from the residential area before taking it to their facility which has many other rescued wild animals living within its premises.

Ho hum, just another day in #Florida -- oh, and a family found an 8-foot-9 #alligator missing two of its legs sitting on their doorstep as if waiting for them to invite him in. https://t.co/g8Px1JTMh6

According to Florida IFAS Extension, alligators are shy animals and tend to avoid human contact. However, due to the population growth and the rising tourism industry these encounters are more than likely to happen. Wildlife officials advise people to leave the reptile alone and refrain from feeding them. In case the animal chases them for getting too close to their nest, people should run away as fast as possible in a straight line. The University also offered pointers to avoid future contacts with the animal and urged people to practice water safety and to keep an eye on surrounding, especially near fresh or brackish water sources. In such cases, experts said swimming should be limited to daylight hours, throwing fish remains into trash cans, and putting up a fence around private yards that are at least four-and-a-half feet tall. "Alligators are good climbers—anything lower would not be adequate protection," UF officials stated. "Remember that in Florida, it is illegal to kill or harass alligators."

This isn't the only wild animal sighting in the country. Two weeks ago, a teenager taking a nap in her backyard was attacked by a humongous bear. The incident, which occurred in southern California, saw the girl use her quick thinking skills to fight off the beast with her laptop before escaping to safety. According to CNN, Fish and Wildlife Captain Patrick Foy. "She [the girl] awoke to the sound of a bear approaching her. It immediately attacked. The only weapon she had was her laptop. She hit the bear with it and stunned it long enough to escape inside the house," Foy continued. "She fought back vigorously, which is what you should do with any wildlife in California." When local police were informed, they responded to the incident as wildlife officials also followed to investigate the issue. They found bear tracks nearby and also caught a glimpse of the bear around midnight.

WHAT!?! A family in #Tampa woke up to find an alligator hanging out on their doorstep......https://t.co/QYng12x8eu