Melania Trump Is Wildly Underestimated, Says Biographer: "Her Brand Is To Be Mysterious"

The first lady and Donald Trump work well together because Melania likes to stay in the background, notes author Mary Jordan. 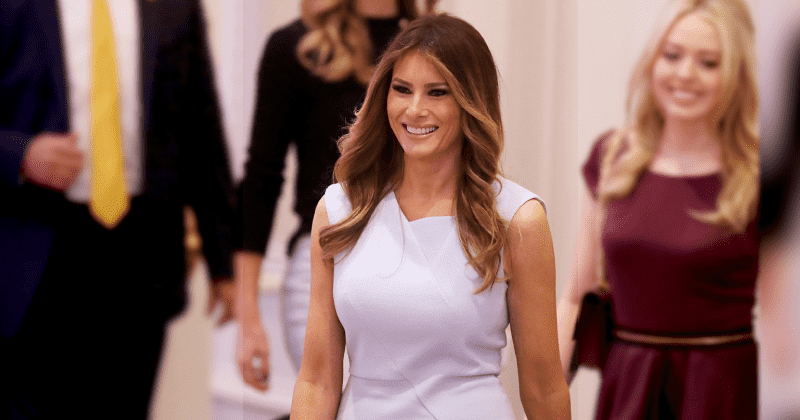 Melania Trump's reserved personality is nothing but a cultivated image, said Washington Post reporter Mary Jordan, who has spent more than 5 years learning about the first lady for a biography on Melania — The Art of Her Deal.

"She does it on purpose. Her brand is to be mysterious," Jordan told CNN last week. "Just as Trump’s brand is to never stop talking. There’s no such thing as too much publicity. He made his name by putting Trump on everything — every building, every magazine. Well, her brand really is (to be) the most recognized, unknown, person perhaps in the world."

She also claimed that Donald Trump and Melania Trump's relationship and the success of their 15-year marriage is a mystery. It's Donald Trump's longest marriage and Jordan says their equation has had its up and downs but continues to be really strong.

"They’ve been together 22 years. And, by all accounts, Donald Trump is not the easiest person to be with for 22 years," Jordan said. "I’ve interviewed many people who’ve been to dinner with them, seen them up close, worked for them, and there is a real connection there. But it has changed over time and it goes up and down."

Jordan says their relationship has baffled many. "Love is complicated and, as they say, Trump love is really complicated. They spend a shocking amount of time physically apart. And yet, the first call he often makes after a speech or a rally is to her. It’s a mystery," said Jordan.

The Washington Post reporter observed that Melania Trump works brilliantly with her husband Donald because she doesn't take center stage. "As Anthony Scaramucci, who used to work in the White House very briefly, said, 'Donald Trump doesn’t do co-stars. There’s only one star.' And Melania’s genius is that she knows that," said Jordan. "She always stays in the background."

However, she claimed that Melania Trump has a lot of dreams of her own, which she could pursue when Trump's term as President ends. "There’s a lot of things she could do. She’s actually quite creative and very smart. I think she’s wildly underestimated, just because she’s quiet," said Jordan. "Once they leave the White House, it will be interesting to see if some of these things that she told people in her 20s and 30s, about wanting her own business, to design things, come true."

The book's author says the tension between Ivanka Trump and her stepmother Melania is palpable and often spills over into official matters. "I’ve spoken to many people and inside the White House, particularly at certain times, tense times, there’s been Team Melania and Team Ivanka," said Jordan about the pair's relationship, reported People. "And there’s a lot of tension there. When Ivanka came to the White House, she really loved it immediately, Melania was up in New York. Ivanka, all of a sudden said, 'You know, I think we should rename the First Lady’s office the First Family office.' And then, of course, Melania put her foot down and said, 'No way.'"

It took Melania more than 6 months to leave their home in Trump Towers in New York and relocate to the White House. Melania had spent the time renegotiating her prenup agreement.

The first lady's office slammed the book, labeling it a piece of fiction. "Yet another book about Mrs. Trump with false information and sources," said Stephanie Grisham, the first lady's chief of staff. "This book belongs in the fiction genre."

Despite Jordan's claims that her book is based on more than 100 interviews, the White House has rebuffed it nonetheless. White House spokesman Judd Deere called the book just another hit piece.

"These allegations couldn’t be further from the truth and had the Washington Post or the publishers of this book fact-checked this with Ivanka’s office, they would know that," he said. "Hit pieces like these only serve to conjure non-existent palace-intrigue stories unworthy of the paper they’re printed on."