First lady Melania Trump revealed the news in a White House blog post on Wednesday. She said he showed "no symptoms" despite testing positive. 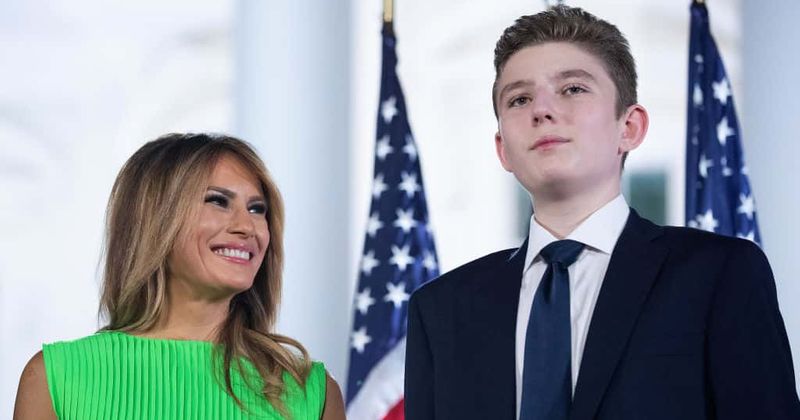 First lady Melania Trump has revealed that her son Baron Trump also tested positive for the coronavirus. The news comes two weeks after she and President Donald Trump announced that they had been infected with the virus. Writing in a White House blog post on Wednesday, Melania stated that her son had been infected around the "same time" she and her husband were. She wrote further, upon learning she and her husband had tested positive, "Naturally my mind went immediately to our son." When tested, the results came out negative at first, "to our great relief," she stated. She wrote further, "...but again, as so many parents have thought over the past several months, I couldn’t help but think “what about tomorrow or the next day?” and added that her "fear came true when he was tested again and it came up positive."

JUST IN: First lady Melania Trump reveals that her son Barron tested positive for coronavirus. She says her son had “no symptoms,” and has now tested negative. https://t.co/dRGqHiwnvu

"Luckily he is a strong teenager and exhibited no symptoms. In one way I was glad the three of us went through this at the same time so we could take care of one another and spend time together," wrote Melania and added, "He has since tested negative." According to CNN, when reporters asked Trump about his son on Wednesday, he said Barron was doing "fine." Later in the evening during a campaign rally in Iowa, he called his son "beautiful" and "free." Barron, Trump claimed, had the virus "for such a short period of time." He added, "I don't even think he knew he had it, because they're young and their immune systems are strong and they fight it off. 99.9%. And Barron is beautiful and he's free."

I guess his parents did a poor job of protecting their son.

In contrast to her husband's bizarre response to testing positive, Melania presented a more empathic stand. "It was an unfamiliar feeling for me to be the patient instead of a person trying to encourage our nation to stay healthy and safe. It was me being taken care of now, and getting first-hand experience with all that COVID-19 can do. As the patient, and the person benefitting from so much medical support, I found myself even more grateful and in awe of caretakers and first responders everywhere. To the medical staff and the residence staff who have been taking care of our family—thank you doesn’t say enough," Melania wrote. She said that she had used her time in recovery to "reflect" on her family and the people around the country.

"I also thought about the hundreds of thousands of people across our country who have been impacted by this illness that infects people with no discrimination," she wrote. Talking about her recovering process, Melania stated, "I was very fortunate as my diagnosis came with minimal symptoms, though they hit me all at once and it seemed to be a roller coaster of symptoms in the days after. I experienced body aches, a cough and headaches, and felt extremely tired most of the time." With regards to the care she took to get well, the first lady said that she "chose to go a more natural route in terms of medicine, opting more for vitamins and healthy food." She also thanked her "wonderful caretakers" and said she would be "forever grateful for the medical care and professional discretion we received from Dr. Conley and his team."

Poor kid. Glad to hear he is doing all right.

No doubt Trump will now blame Barron as the vector. 🙄

Melania also offered her advice to people to beat the virus and protect against it. "I encourage everyone to continue to live the healthiest life they can. A balanced diet, fresh air, and vitamins really are vital to keep our bodies healthy. For your complete well-being, compassion and humility are just as important in keeping our minds strong. For me personally, the most impactful part of my recovery was the opportunity to reflect on many things—family, friendships, my work, and staying true to who you are." wrote she.