The devastated father wrapped his child's body in his jacket and placed a small US flag on the gurney. 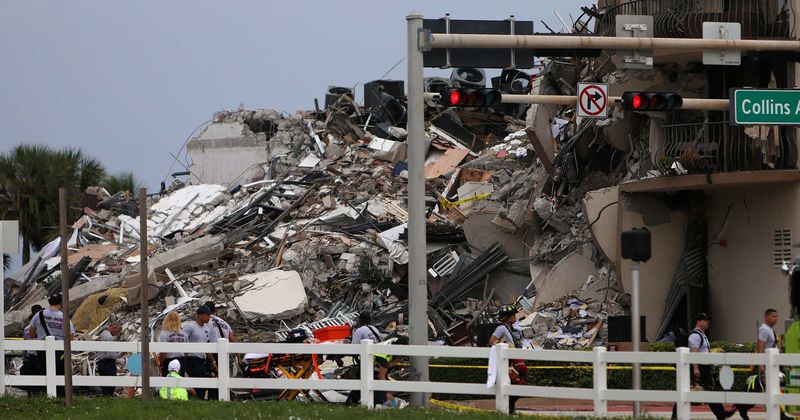 Trigger Warning: This article contains details of death that readers may find distressing

In a heartbreaking twist of fate for a first-responder, a firefighter in Miami learned that his own child's body was in the rubble from last week’s Champlain Towers collapse. The grieving father assisted a crew of search workers who recovered the 7-year-old girl's remains. The firefighter wrapped his daughter's remains in his jacket and placed a small US flag on the gurney, according to WPLG-TV.

Tragedy upon tragedy. I’m so sorry for all of the affected families and loved ones.

Miami Fire Rescue Capt. Ignatius “Iggy” Carroll said Miami’s Urban Search and Rescue Team, Florida Task Force 2, recovered the girl’s body. The grieving firefighter was there to assist in the removal of the body, but he was not the one who recovered the body, Carroll said. Neither the young collapse victim nor her father was identified by officials. “We can confirm that a member of our City of Miami Fire Department family has lost his 7-year-old daughter in the collapse,” Miami Fire Rescue Chief Joseph Zahralban told the station. “She was recovered last night by members of our Urban Search and Rescue Team, Florida Task Force 2. We ask that you respect the privacy of the immediate family as well as our fire department family while we grieve our loss and support our own,” he said.

Just heartbreaking news. Every first responder’s worst nightmare. My thoughts are with the poor firefighter and everyone involved in this shocking incident. https://t.co/Of5bHJHfrL

“It goes without saying that every night since this last Wednesday has been immensely difficult for everybody, and particularly the families that have been impacted,” Miami-Dade Mayor Daniella Levine Cava said on Friday. “But last night was uniquely different,” Cava said. “These men and women are paying an enormous human toll each and every day.” Florida Gov. Ron DeSantis addressed the child's death during the briefing, saying that “these are tough things” for the workers to deal with. “Obviously we focus on the families and rightfully so, but our folks have gone through a lot that are out there,” the governor added.

Florida Gov. Ron DeSantis has praised FEMA and the Biden administration for “stepping up to the plate” in providing assistance in the search and recovery effort.https://t.co/dHFSU8UGH2

Scott Nacheman, a structural specialist with the FEMA Urban Search and Rescue Incident Support Team shared. “The building itself has not moved, however debris in the pile below the building as well as debris on the building, of significant size had displaced. Right now, we feel that it is safe to continue operations and that monitoring will continue until the operations are complete,” Nacheman said, adding, “Any demolition process takes time. “Takes time to evaluate the current conditions, the planning for the demolition scheme and the actual on site preparations for the demo. So best-case scenario, we are looking at weeks.” Nacheman added they would be bringing in more equipment and more sensors to closely watch portions of the building for the safety of the crews down below. The discovery of the child's body brought the official death toll to 20, with 128 people still missing.

A small ray of hope glimmered during the terrifying ordeal with the heroic rescue of a daughter by her brave mother. Angela Gonzalez suffered a broken pelvis when she plunged four floors, from the ninth to the fifth, during the condo collapse. But she still managed to help pull her teenage daughter, Deven, out of the rubble. A GoFundMe arranged by friends of the family has since managed to raise $103,357  at the time of this publication. While the mother and daughter are recovering in the hospital, dad Edgar is still among the missing. The couple's older daughter Taylor was not in the building at the time of the collapse and has been by their side while the family waits for news on Edgar’s recovery. Gonzalez's best friend Joslyn has been sharing daily updates to the GoFundMe page. Gonzalez was still intubated on Sunday but was "responding" and "fighting" by Wednesday, which was also her birthday. Joslyn added: She is a miracle! I was so happy to see her, she is one tough lady!

Among the small glimmers of hope to come in the immediate aftermath of the Champlain Towers condo collapse was the heroic rescue of mom Angela Gonzalez and her teenage daughter. https://t.co/6QuTGnrC0D