The Alliance Defending Freedom filed the lawsuit on her family’s behalf claiming the district violated her free speech. 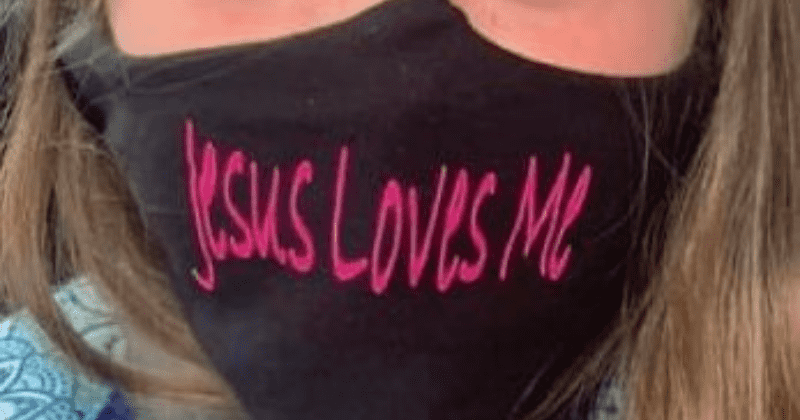 A third-grade pupil in Mississippi wore a face covering with the words “Jesus loves me” to her school. Lydia Booth, 9, was then ordered by her principal to remove the mask on Oct. 13 at Simpson Central Elementary School in Pinola. WLBT reports that the mask went against district policy, according to the school who later issued a statement banning any mask that displays “political, religious, sexual or any inappropriate symbols, gestures or statements that may be offensive, disruptive or deemed distractive to the school environment.”

That sucks, but the parents broke the school’s guidelines on masks.

The statement in full reads: The Simpson County School District does not discriminate on the basis of race, color, national origin, sex, religion, disability, marital status or age in admission or access to, or treatment of employment in, its programs or activities. It is the intent of the Simpson County School District to comply with both the letter and the spirit of the law in making certain discrimination does not exist in its policies, regulations and operations. We will continue to expect all students and staff to wear a mask at all times in common areas to help prevent the spread of the Coronavirus. Masks cannot display political, religious, sexual or any inappropriate symbols, gestures or statements that may be offensive, disruptive or deemed distractive to the school environment. This expectation was outlined in our restart plan and is specific to masks only. The principal and Superintendent will be the final authority on the appropriateness of any mask worn to school. Wearing school colors, the school mascot or simply having a blank mask is encouraged. We appreciate your understanding and compliance with these expectations.

Proud of the child for showing her faith in Christ.

The child's mother Jennifer Booth, stated that the school’s handbook did not have any policy curbing her daughter’s religious expression. In fact, her freedom of speech is protected under the Mississippi Student Religious Freedom Act. A school official allegedly responded by giving Jennifer a modified copy of the school’s plan to combat COVID-19 where the new rule on masks is included. The Alliance Defending Freedom filed a federal lawsuit on Monday on the little girl's behalf claiming the district violated her free speech. “Public schools have a duty to respect the free expression of students that the First Amendment guarantees to them,” said ADF Legal Counsel Michael Ross. “...Other students within the school district have freely worn masks with the logos of local sports teams or even the words ‘Black Lives Matter.’ This student deserves an equal opportunity to peacefully express her beliefs.”

My goodness! May God Bless ADF and its effort to shine light into this darkness!

According to ADF Media, ADF Senior Counsel Tyson Langhofer, director of the ADF Center for Academic Freedom shared, “No public school student should be singled out for peacefully sharing her religious beliefs with fellow students. Today’s students will be tomorrow’s legislators, judges, educators, and voters. That’s why it’s so important that public schools demonstrate the First Amendment values they are supposed to be teaching to students.”

Most schools don’t allow words on masks. Another plea for attention smh

Twitter users had mixed reactions to the incident. While some believe the girl's right to expression needs to be protected, others felt that bringing a lawsuit into the matter was a bit much. LauraD972342 wrote: This is wrong. It hurts no one and is her way of honoring her God! We wouldn’t ask a Muslim to remove their Hijab? Hate seeing stuff like this. LemmeTellYouWat tweeted: Probably because the school doesn't allow any words on masks, which is pretty standard... DavejoeeDavid pointed out: Who the hell was so offended by this that they brought a lawsuit? grace_hackney believes if it's part of the school rules, shouldn't one comply? They write: My kids school said solid color masks. Crazy how people think rules shouldn't apply to them. Like when the MAGAT hat kid didn't understand why he wasn't allowed to wear a hat when the code of conduct said NO HATS.

Did the school have a policy that said no written messages on clothing? Masks are considered clothing by many of the dress codes now.