The six-minute video shows the 23-year-old breakdown and question, 'Why so much hate?' 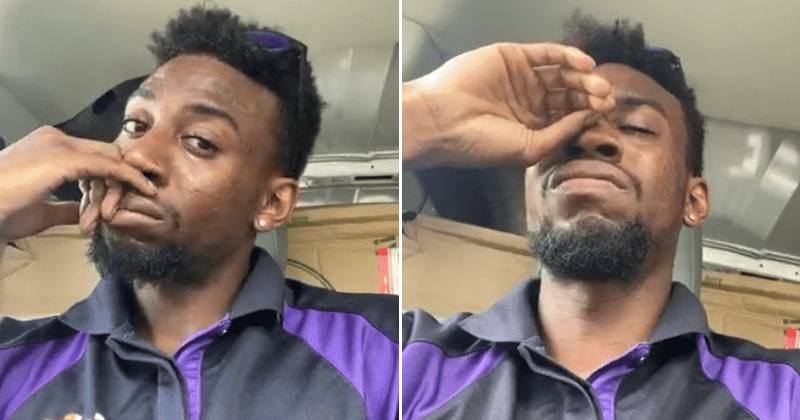 An emotional video uploaded by a 23-year-old FedEx employee from Ohio shows the rampant racism that is till running thick on American streets. Brandon Brackins did a Facebook Live as soon as the incident occurred and could be seen sitting behind the wheel of his parked delivery vehicle, crying. He then went on to explain the reason for his emotional demeanor in the six-minute video, that has since gone viral. It has over 2.3 million views and has been shared over 33,000 times.

As he wiped off his tears, Brackins said, "What the f*ck is the point of all this protest sh*t if it don’t work?" He then went on to say that he was delivering some packages and as he was taking the boxes out of the truck, "some f****** hick speeds around me - damn near hit me - calls me a n***** and spit on me." He then exclaimed furiously and stated, "I want to bury somebody right now." He then said, "Why so much hate? Why," and wiped away his tears. "Almost hit me. Called me a n***** and then spit on me. Spit on me? Really? Wow. Just wow," he repeated in disbelief. As he tried to hold back tears he questioned why there was so much hate and said, "I just don't get it."

"I got a white family. My dad's white...I don't get it," Brackins said. He was taken aback by the experience and had stopped his truck to gather his thoughts. "This s*** is a lot worse than people think," he said. "Racism is live. And if any of you ever had to go through that s*** first hand, experience racism first hand, I promise you...," he trailed off trying to hold back his tears. "I'm usually really good with words. I don't let that stuff get to me.... But what? This world is so f***** up. I can't even work right now," he said and added, "I work for FedEx! I do you guys a service! And that's what I get in return."

He then went on to acknowledge the racism that he has known "since day one." Brackins mentioned that he did not say anything about the racism he was expecting to come his way because he did not let words get to him but this time was different. "When you almost hit and put your bodily fluids on me...no! That's not okay," he said. "And then you drive away like a f****** coward-a** pussy." Brackins then dared the man who hurled the racist behavior at him to stop the next time instead of running away like a coward. He described his attacker as an "older white male" aged around 50-65, bald, wearing glasses, and with "scruffy facial hair," reported The Daily Mail. He said he was driving a 2007-2009 Ford Escape.

A FedEx spokesperson released a statement with regard to this incident saying, "We are both saddened and outraged. This type of behavior has no place in society, and our first concern is for our team member. We are staying connected offering our support. At FedEx, our workforce is as diverse as the world we serve, and we believe that everyone deserves respect." The members of the community where the incident took place have also joined forces to extend their support to Brackins. They are now even selling signs that say "Hate has no home here" and proceeds will go to the charity or organization of Brackins’ choice, reported Fox8.

And to those saying he should had fought back, lol then be shot and killed, then the Trumpers would say, well he deserved it he was violent, so apparently just let him get spat on.

Brackins although initially shaken by the attack is not backing down either. He is now pursuing legal action against the man in question. VT reported that in a follow-up comment Brackins wrote, "Oh trust me I am currently getting the cops involved got him on camera and his car. Handling that and trust me I’m definitely gonna give love back it means soo much too me. [sic]"

This FedEx driver was moving boxes when a man ran up, spat on him and called him a racial slur. pic.twitter.com/CX1bMJTLBN