The Irish father returned home one day to find all his three children dead, with mother of the kids suspected to have killed them. 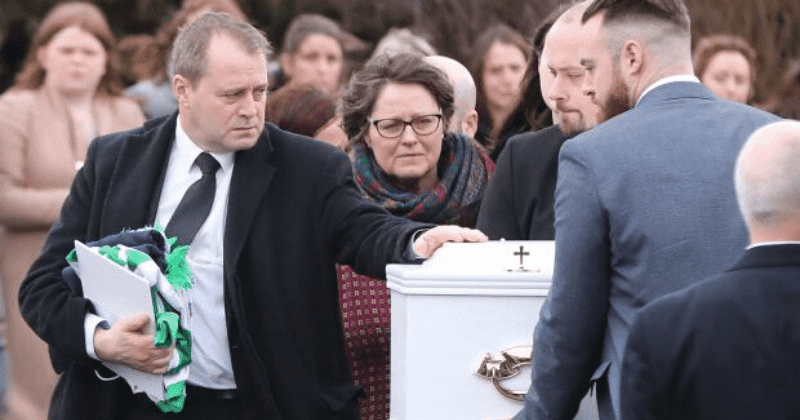 Losing a child is hard to deal with; they're often very closest to our hearts and not having them be part of our lives anymore will shatter us completely. But, this father from Dublin experienced the heartbreaking agony of losing all three of his children. According to the BBC, Andrew McGinley came home from work on an unfateful day in January and found his babies dead. Their mother, Deirdre Morley, 43, from Parson's Court in Newcastle, was charged with their murders as well as continual psychiatric assessment and treatment.

Recently, McGinley was part of the hearse which carried three single coffins to the Church of The Holy Family, where the devastated father broke down when he had to bid his final goodbye to his three beautiful kids, Conor, 9, Darragh, 7, and Carla, 3. The situation became all the more heartbreaking when he reached out and touched one of the coffins, the closest he could ever get to them.

'We will be forever heartbroken' - Andrew McGinley's eulogy for his three beloved children https://t.co/8lB6xSHLhE pic.twitter.com/ztixzpLK6t

According to The Sun, the distraught father also talked about the things that made his children happy and thanked the ones behind it. He said, "You gave them creativity but most of all you gave us joy together as a family. Please understand that and please continue to bring as much joy as you can to the children of the world. Thank you for Ironman, Thor, Captain Marvel, Hulk, and all the rest. Thank you Robert Downey Jr and thank you Chris Hemsworth for bringing Ironman and Thor to life. My kids absolutely worshipped you both."

Feeling numb after watching a clip and reading the transcript of heartbroken father, Andrew McGinley, as he said an...

He thanked several of the other Marvel superhero cast as he continued, "To Mark Ruffalo, Carla loved big friendly Hulk in Avengers Endgame and thanks for your bits of that film that I was able to show her. Thank you to everyone involved in Frozen, special thanks to princesses Anna and Elsa and also to a snowman called Olaf from our princess Carla. Carla my love, I had really hoped that we would be finally building that snowman this year. I’m so sorry. Thank you to whoever invented trampolines. You will never know the fun and enjoyment ours has brought Conor, Darragh and Carla."

Even at this time of sadness, he went on to urge parents to do the things he wished to have done with them so they wouldn't have to go through the devastation he felt. Speaking to Dublin Live: "Conor, Darragh, and Carla are adored. They all had beautiful, bright futures ahead of them with family, friends and a community who love them. To all parents, cuddle your children whenever you get a chance, tell them how much you love them as often as you can, spend every spare minute with them reading, playing and enjoying their wonderfulness. The future has now become our enemy but we will battle it every day to keep the memory of Conor, Darragh, and Carla alive.”

I’m looking for a favour. I’m struggling with isolation like you all but really missing the company. I was also enjoying most of the letters that I received so I have a request. Can you write to me? If you feel like using one of your An Post postcards then great. Letters welcome. pic.twitter.com/V72gLbGbtC

Talking about how he had to return to an empty home, McGinley said: “There are no words. There is only devastation, grief and anguish. Every breath is a struggle." Recently, he even went back to his home that was once full of life and he was swarmed by his neighbors who offered him tributes and warmth at a time he needed them the most. McGinley's resilience in spite of the horror he's had to endure has become an inspiration to many in times of humanity's worst-ever crisis—the coronavirus. Recently, he took to Twitter and thanked people for being there for him: When Conor, Darragh and Carla died in January I was carried through by the support of family, community and colleagues. Having people around to support helped me cope. The amount of people attending the funeral gave me strength to get through the eulogy, funeral and burial.

He also spoke about the ongoing pandemic and offered a message of solidarity for people who lost their loved ones: I cannot begin to imagine how I would have managed in this time of Covid-19. I'm heartbroken by the daily reports of funerals where hundreds would have been there to support the bereaved and to pay their respects. He even urged people to come together to celebrate the one who passed away after the lockdown is completely lifted. At the moment, McGinley has a YouTube channel titled Conor's Clips, which he set up to fulfill the promise he'd made to Conor, where he posts old clips featuring his babies.