Derek Prue Sr. explained that his son had become a bit self-conscious about his birthmark and so he decided to get a similar-looking tattoo so his 8-year-old would'nt feel bad about it. 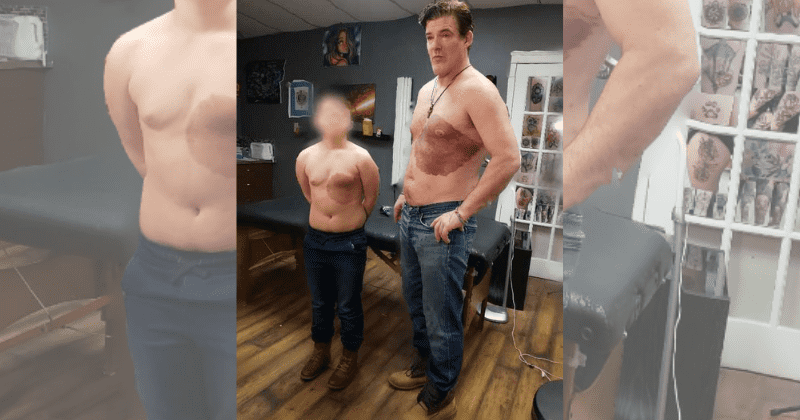 If it's within their power, parents will do everything to keep their children happy. Derek Prue Sr. is one such father who decided to get a tattoo matching his son's birthmark. The resident of Stony Plain, Alberta, spent 30 hours getting himself inked to make his son feel comfortable about his own body. According to Daily Mail, Derek Jr. was born with a huge birthmark sprawled across his chest, covering a major portion of his left torso. Although Derek seemed to be proud of his birthmark, Prue noticed that he started refusing to take off his t-shirt in the swimming pool. Thus, the doting father decided to get a similar looking tattoo on his chest so his son didn't feel self-conscious.

"He was always proud of his birthmark and then I saw he started to kind of cover it up," shared Prue, reports SooToday.com. "I think he was maybe a little bit self-conscious about it. I was wanted to get the same thing so he wouldn’t be the only one." Right before, Derek became conscious of his mark, his friends had started talking about it. "They don't make fun of it, but they ask me sometimes," explained the boy. "I say it's just a big brown mark that came with me when I was a little boy."

Wow. That is a very cool dad ✌️

When the father first arrived at the Juicy Quill Tattoo parlor, he assumed it would be a rather simple task. However, he ended up attending nine-sessions to get the job done. "I thought it was going to be a one session kind of thing. But three hours turned into about 30 hours. So it's been a bit of a process," he admitted. Describing the process, he continued, "The first sitting, I think, was close to four hours. And I didn't really look to see what was going on. So I thought at the end of four hours it was done. So I said, 'Is it almost done?' and he said, 'I'm almost done the outline.'"

What a beautiful gesture, 😊

Prue was also administered a numbing treatment many times to help counter the pain due to the enormous size and position of the tattoo. "That area of the body, the ribs, the pec area, just very sensitive nerve endings," explained tattoo artist Tony Gilbert who created the tattoo on Prue. Apparently, there were several moments when the dad had to be frozen to help with the pain. Ultimately, it was worth all the aches and discomfort for the father when he saw his son's priceless reaction to his tattoo. Derek was unaware of what his father had been doing but this changed when the family went to a swimming pool together.

Hell yeah! Great father son relationship there. Good for them both.

"I just kind of took my shirt off. He was wearing his shirt. I showed him that I had the exact same mark as him," recalled Prue. The ecstatic boy could be heard saying in a family video, "That's cool!" Encouraged by his father, Derek took his shirt off and played in the pool. This was exactly what his father had hoped for all along. Then on December 9, the father and son duo went to the Juicy Quill Tattoo together for Gibert to compare his 30 hours of hard work. "This is something that really affected his everyday life, giving him more confidence, letting him know he wasn't the only person with this big mark. Now it's forever," stated Gilbert.

Taking to Facebook, the tattoo studio wrote: Very cool that he could do this to help his son's confidence and that we could be a part of their story. The boy's mother, Hope Marie, replied saying, "Just wanted to say thank you for all you have done and your part in making this so special for my son." She continued, "You will forever be a part of our lives! His painting you gave him is already up in his room! Merry Christmas to you and your family! Again with the most sincere gratitude THANK YOU"