trending celebrity people lifestyle news animals
Man, Whose Daughter Chose Biological Dad Over Him, Refuses To Walk Her Down The Aisle After "Real Dad" Dies

Man, Whose Daughter Chose Biological Dad Over Him, Refuses To Walk Her Down The Aisle After "Real Dad" Dies

His 26-year-old daughter moved out of his house saying he wasn't her "real dad". So when she needed him to take part in her wedding on behalf of her biological father, he refused. 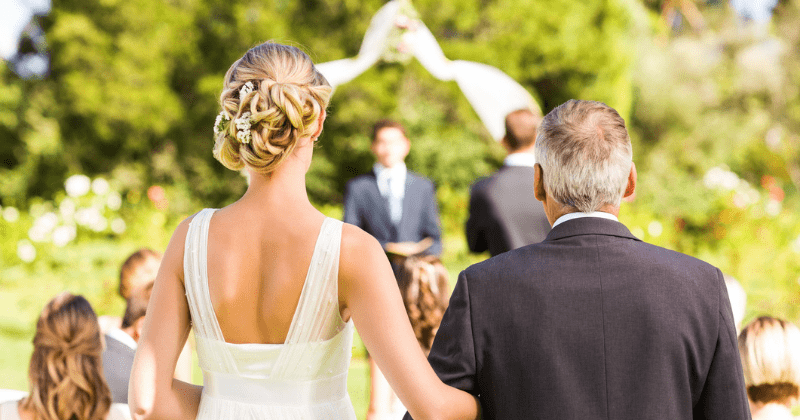 For a bride's father, there's no greater joy than to see his daughter happily married to a good man. It's their dream to walk her down the aisle on the big day and share a touching father-daughter dance. But one father wanted none of that because of a decision his 26-year-old girl had made in the past. Reddit user herweddingday_ began by explaining the current status of their relationship: "My daughter (26f) and I haven’t spoken in years." Apparently, "when she was 15 we found out she wasn’t my biological daughter and my wife had cheated on me years ago with a friend. As it turns out this so-called 'friend' was suddenly interested in playing dad."

Eventually, "my wife and I divorced" and "my daughter learned the truth." However, he assured her that he "still loved her no matter what." Understandably, she was curious to explore her relationship with her biological father, and while her decision "hurt", the father "tried to accept that." What he didn't expect was for her to distance herself from him. "She started pulling away from me after that. Even when trying to still do things together as a family she was no longer interested," he wrote. "The last straw was when she was 20 and living at my house. We were arguing because she’d dropped from her college courses, hasn't done anything for 3 months, and mad because I told her she either needed to go to school or work if she wants to stay here for free."

He did what any concerned father would do but the girl didn't see it that way. "She told me I’m not her real dad so stop pretending like I am and she’ll just go stay with her real father. That broke me honestly. But I told her if that’s how she really feels then there’s really nothing left to say between us," he continued. His daughter ultimately moved out and went to live with her biological dad, leaving the Original Poster (OP) "depressed for a very long time." He drank a lot and the only thing that had him going was his 24-year-old son. "She wanted no contact, I learned to accept that and move on. It helped me find more peace in my life. My son stopped talking to her for a while over this and was angry with her. They still chat sometimes, which doesn’t bother me at all," he noted.

Then one day, he learned through his son that her biological father died in October 2019. Apparently, his daughter was engaged as well and wanted him to do something for her. "She reached out to me, first that she knows that 'we haven’t talked in a while' but wants to ask me if I’d be willing to walk her down the aisle," he recalled. "After a pretty long message about how much she hurt me in the past with her actions, I told her no. She didn’t want me to be her father anymore so I learned to no longer view her as my daughter. This turned into a fight between us because according to her it’s not her fault she wanted to know her real dad. And I agreed with her it’s not, but what was her fault was how she treated me ever since," he explained.

The man feels that they wouldn't be having this conversation right now if her biological dad was still alive. Thus, "it ended with telling her I hope she enjoys her wedding but I want no part of it or her life." Concluding the post, he wrote, "My son’s told me she’s ranting to my family that I’m ruining her day and she thought parents are supposed to love their kids unconditionally. My brothers seem to think now that I am being an a**hole and this is my chance to be in her life again. But I have no interest in that.
Still seems everyone has a strong opinion on it that I’m making it difficult for my daughter to have the wedding she wants when it would mean a lot to her. My son is on my side but the comments are still wearing me down and just for the sake of my sanity, am I being an a**hole?"

Most Redditors believed that the man was not in the wrong. "NTA. She decided that you're not her father in any capacity. You've respected that. Now that the other guy is dead, she doesn't get to change the rules. She doesn't want you, she wants someone to play a part. Maybe your son can be the one to give her away instead," shared one user. Another expressed, "I am so sorry your daughter has treated you like this. She threw away a relationship with someone who sounds like an awesome dad for no reason. You did nothing wrong and don't deserve this after the years of effort you put in trying to be her dad. As someone whose father was abusive and stepfather pretended to love me until I was an adult and then threw me away like trash, I would be thanking my lucky stars to have a dad like you. Let her mom or a friend walk her down the aisle. She doesn't deserve you at this point unless she does some serious and genuine apologizing (with actions, not just words), and even then it's still up to you if you want to be in her life again."