Farmers Says We've Been Storing Eggs "Wrong" All Along

In the viral TikTok video, the man shared that the pointy side should be at the bottom and the flatter side at the top. 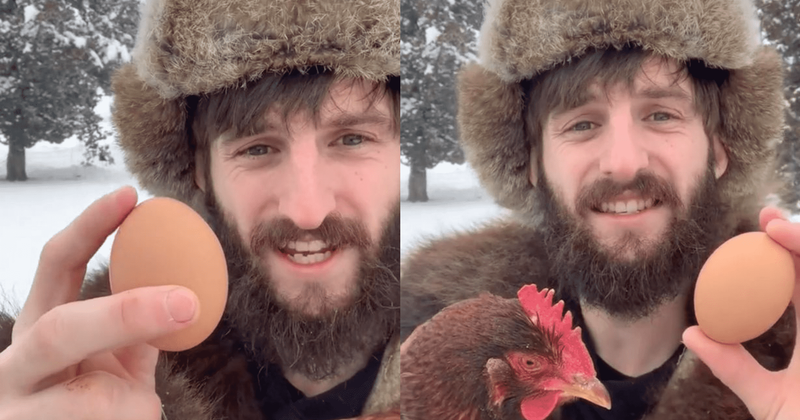 Say what you want about TikTok but the social media outlet has constantly blown our minds with tons of everyday things we've been getting so wrong. Right now there's a video on just about every life hack possible and you can find them all on the network in a few minutes. Recently, a user by the name of Noah Young took it upon himself to show that we have been storing our eggs the "wrong" way all along. The Nebraska man, who runs The Shiloh Farm, made thousands realize the error of their ways, reports Mirror. In the post, he showed people the best way to store eggs and according to him the "pointy" bit of the egg needs to be at the bottom, not the top. "Did you know you've been storing your eggs all wrong?", he says. "Let me explain. First things first, every egg has a pointy end and a blunt end and that blunt end actually has something called an air cell and this air cell actually acts as a buffer, keeping bacteria, such as Salmonella, away from the yolk."

He went on to reveal that if the eggs are stored blunt side down, the air cell will begin to lift up with gravity, and this brings the bacteria close to the yolk. On the contrary, he shared: "If you keep it pointy side down, that air sac will actually stay right at the top, and keep your egg fresh for longer. I hope that helps." Young's video has gone viral with as many as two million views and over 149k likes in a few days. People were quick to comment on having learned a new thing in their life. A user wrote: "TikTok has shown me I do virtually everything wrong," drawing laughs from plenty of people. Per VT.co another wrote: " Listening to this as I walk to the fridge and turn all my eggs upside down." A third user commented: "At this point, I don't think I'm breathing right." Another person shared: "I'm going to flip mine around right now." In a similar video, Kacie, a professional cleaner, imparted important knowledge on how she typically cleans a toaster. She said, "There are cleaning hacks going around the internet that are not really cleaning hacks at all... they make it harder," she explained.

"I'm a professional cleaner and this week, I was sent [a hack] saying 'clean your toaster with a hairdryer'." In another video she asks, when was the last time anyone cleaned out their toaster. According to the Daily Mail, she opened a "secret" tray compartment that not many people were aware of. More than the cleaning technique, people seem baffled that the appliance had a hidden tray beneath the toaster. In her cleaning video, she used a cloth to clean the outside of the gadget before she removed the crumb tray, as it is known by some. The tray is located at the base of the toaster to empty the dried pieces of toast into a bin. The video went viral garnering 2.2 million views.

One user wrote: "Yes there is a tray. It can pop out or slide out depending on the toaster. Clean the trays y'all or violently shake it over the trash bin." Users on Twitter too were gobsmacked. TFennerz joked: "It took me 26 years of existence on this Earth to learn that toasters have a little tray on the bottom that you can pull out to empty the crumbs. There was me shaking an upside-down toaster over a bin like a fucking idiot." Many were absolutely shocked to learn their toaster had a compartment they never knew about.