The child's mother shared her side of the story after their video went viral. 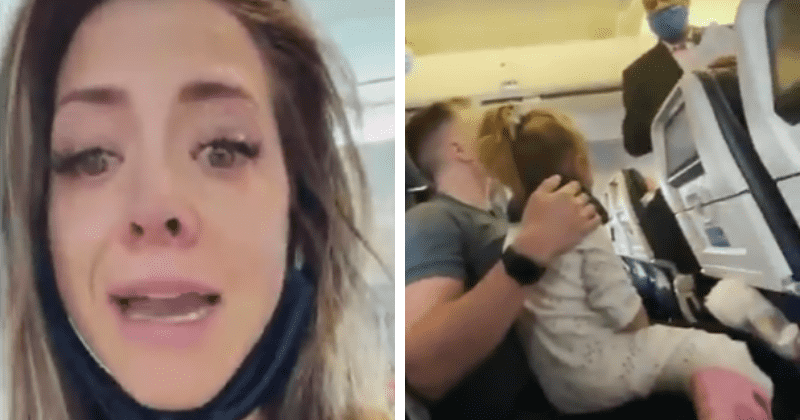 A family was asked to leave a United Airlines flight because their 2-year-old daughter refused to keep her face mask on. According to The New York Post, the little girl's mother shared her story online saying that she, her husband and their toddler were set to fly from Denver into New Jersey’s Newark International Airport. “We just got kicked off the flight because our 2-year-old would not put on a mask, and we tried,” said the distraught mother in the now-viral video. The family posted a video of how they were trying to put a mask on the little girl who refused.  “Come here, you have to put this on,” Orban’s husband can be heard saying, "You have to.” Later a cabin crewmember comes in and says, “Hello, sir, I’m going to have to ask you to grab your belongings and exit the aircraft.” “You’ve gotta be kidding me,” replied Orban’s husband in disbelief.“No, sir,” said the crewmember. “I’ve got to ask you to get off this plane,” he said. When the husband asks if such a move was routine, the crewmember replied, “If there’s non-compliance, yes.” “I’m literally holding it over my daughter’s face,” he said. “This is compliance right here.” The child's mother stepped in to say, “We can’t force her,” she said. “She’s literally holding it, and she’s crying.” The family ended up exiting the plane. In her Instagram post, (which is now private) she reportedly wrote: I am still sitting here in confusion, disbelief, disgust and humiliation.

Today we got kicked off of a United flight going from Denver to Newark because our 2yo would not “comply” and keep her mask on. Go see the full IGTV on my Instagram @elizfulop 😷 pic.twitter.com/KXCICsBSMj

Orban reportedly told Fox and Friends Weekend, “The experience was absolutely traumatizing, very humiliating too. I’ve never been more confused in my life.” Orban said that the family are premier Silver members with the airline and had already flown four times with their daughter on United since the pandemic began and had never had an issue. She also revealed that a flight attendant asked the parents how old their daughter was. When they learnt she was two, they said she would have to wear the mask and provided the family with one. “After that, the flight attendants wouldn't talk to us,” Orban said. “We kind of noticed them walking by and kept checking what we were doing, and it just felt really, really, really weird,” she added. “And that was the only interaction we had with a flight attendant or with anyone saying anything.” She went on to say that “the staff was rude” from “the get-go.” “We felt like we got no warning, no working with us, no asking questions, nothing to help in the situation,” Orban added. “It was just like, ‘Oh, well your 2-year-old is not complying, you guys are off the plane.’” Host Will Cain asked Orban if her frustration is with “the policy, with the flight attendants or is it larger, where we are as a society right now when it comes to these sort of mandates?” “Definitely all of it,” she said. “Me and my husband are both immigrants. We've come from Europe, and we've grown up in a very different country, and coming here has been just a huge blessing, you know, living the American dream and living in free America,” she added. “I just have to say the past year has just been a huge PTSD for us and very, very scary with everything going on.” While some people believe that the family was treated poorly and blame the airlines others feel that the family should follow protocol if they're planning to travel during a pandemic.

Hold on, so these grown ass adults are getting kicked off the plane because they refuse to tell their 2 year old child what to do lmfao. “We can’t force her to wear it” 😂 there really are two different America’s cause this would not even have been a discussion in my family. https://t.co/iqb3pR8Kuk

First world problems. I have kids, common sense would tell you this is a risk with a 2 year old. Just cause you have kids doesn't mean the rules don't apply to you. For the airline to fly, it's likely a condition on their insurance that steps are taken to avoid virus spread.

Nothing makes me happier than the tears of people who travel during a pandemic. Play stupid games win stupid prizes

United Airlines said in a statement to Heavy that their own mask policy includes children as young as two. It said: The health and safety of our employees and customers is our highest priority, which is why we have a multi-layered set of policies, including mandating that everyone onboard two and older wears a mask. These procedures are not only backed by guidance from the CDC and our partners at the Cleveland Clinic, but they’re also consistent across every major airline. We are investigating this specific incident and have made contact with the family. We also refunded their tickets and returned their car seat and bags.