70-year-old Don Rosario had been selling paletas in the streets of South East Chicago for over 50 years. 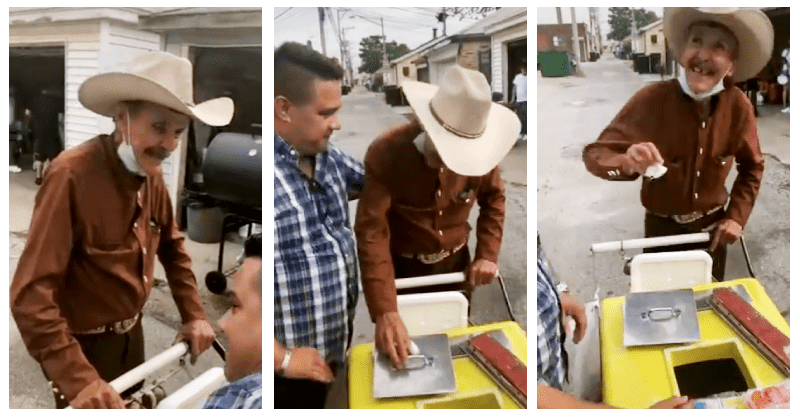 A Chicago family was enjoying their day out in the sun when they came across Don Rosario, an elderly man who made his living selling ice creams. It was Father's Day and Michaelangelo Mosqueda felt for the elderly man having to sell paletas, Mexican-style ice pops, in the searing heat. Mosqueda's family decided to buy all the ice creams he had, so he could call it a day without having to toil in the heat all day especially on a holiday.

Don Rosario was moved to tears by their act of kindness. Rosario hails from the Southeast side of Chicago and had been making ends meet by selling ice creams for more than 50 years, reported WGN9.

They bought out the entire cart from the Paleta man on fathers day so he could go back home to them 😭😭😭😭😭 brb crying in the club pic.twitter.com/ZK2VyLuiYD

The family also stated that it was common for vulnerable people to be attacked on the streets. “It can be very dangerous for paleteros or anyone out in the streets; we have heard of many that have been attacked by people just to get a couple of hundred dollars from them,” said Karen Gonzalez, one of Mosqueda’s family members. Last week, an ice cream man, much like Don Rosario, was beaten up until he was unconscious by 3-4 suspects who made away with the $65 dollars he had earned.

My cousin’s TikTok of buying all the paletas (Mexican popsicles) from a 70-year-old man yesterday because they didn’t want him to continue working on a holiday went viral.

The video is all the feels. ✨ pic.twitter.com/OXnPTZpzXd

One of the family members took a video of Michaelangelo Mosqueda buying all the ice creams and posted it on Tik Tok where it went viral. The video was captioned: Buying all the paletas from the #PaletaMan so he can go home and relax on Father’s Day 🥺 #vivalaraza #MakeSomeoneSmile #essential. The video garnered more than 1.5 million likes, 46,000 shares and received over 26, 000 comments thanking the family for their act of kindness. The elderly man can be seen looking up at the heavens and tearing up in the video as one of the family members give him a pat on the back.

They gave this man 40 bands and he said : pic.twitter.com/s7xM4rbhbg

Mosqueda went one step further and created a GoFundMe account for the elderly man, in the hope that it would help the 70-year-old man retire or at least give him the choice to sit at home on a sunny day. The family set a goal of $10, 000 for theGoFundMe in Don Rosario's name and titled it: Help Don Rosario Retire.

"My name is Michaelangelo Mosqueda. I live on the southeast side of Chicago. Don Rosario is a 70-year-old local paleta vendor who sells throughout the southeast side," read the description of the GoFundMe page. "On Fathers Day, the Gonzalez-Domínguez family purchased all the paletas from Don Rosario so he could go home and relax on such a hot day. The video that was posted on TikTok of this act went viral. The funds that we are raising will be used to help Don Rosario retire. The money raised will hopefully allow him to no longer have to work in the heat."

Many people contributed to the fundraiser after the video went viral. The GoFundMe page raised $39,000. Michaelangelo Mosqueda closed donations to the GoFundMe page and wrote: Millions of thanks to everyone that shared and donated to make this all possible! We have met and surpassed our goal to raise Don Rosario’s donations. Donations will be ending now, thank you all who contributed in any way! We can’t wait to present Don Rosario with his Donations, please be patient!

After watching the 70-year-old get emotional in the earlier video, the whole of the internet is waiting to catch his expression when he finds out about the $39,000 he's about to receive.