trending celebrity people lifestyle news animals
Fake Camel Toe Underwear Exists, And We're Not Sure What To Think Of It

Fake Camel Toe Underwear Exists, And We're Not Sure What To Think Of It 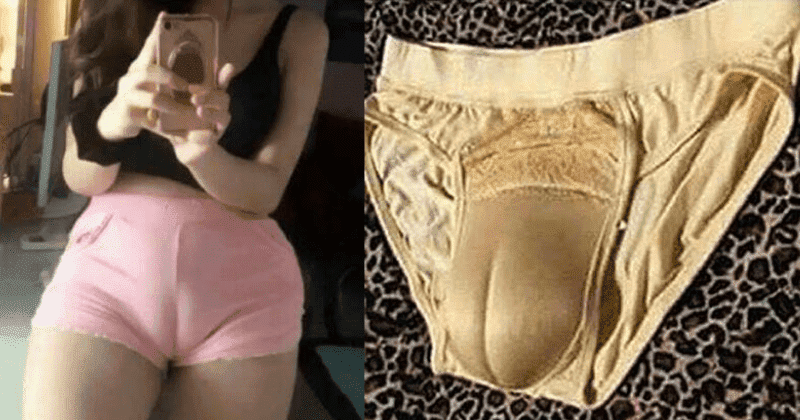 Would you try this not-so-subtle trend? We're all for body positivity, so if women want to flaunt their camel-toes, who are we to stop them? That being said, people have mixed feelings about this weird trend. While some don’t particularly like the outline of their genitals on display and would go to extreme lengths to avoid sporting a camel toe, others are all for embracing their puffy parts. So if you do want to accentuate your privates with additional padding, here's a product for you.

Make up, wigs, nails, eyes brows/lashes, those shape wears, now this? so nothing is real anymore. 😳😳👎👎🤢🤢

Camel toe undies are available for purchase on a number of online shopping sites including Amazon and eBay. The one-of-a-kind knickers are padded in the front with silicone and are shaped like a camel toe. And with all beauty trends, in some parts of the world, this is nothing new! In Japan, women proudly flaunt their fake camel toe, according to Maxim. For some, these undies might not be easy on the eyes, but is it comfy to wear? Georgina, a model from Norwich who tried on a pair, told MailOnline, "They feel like normal knickers, they're comfortable and cottony. You don't really notice that's there, although other people will. With tight leggings, it would be pretty noticeable." Georgina also assured people that it's not as conspicuous as one might think it'd be. "It's not as noticeable," she said. "They're just large knickers like you would wear tummy tuck pants, like a strong Lycra." But Georgina admits that she's not dying to get herself a pair, "I don't think they're for me personally, but to each their own."

The description of a type of camel toe underwear on Amazon read: Get freaky with these NEW sexy Camel toe panties. These sexy underwear let you bring a camel toe wherever you go. Similar to a good bra, these quirky panties promises to “lift and separate”. You can be sure that you will leave an impression on the people you meet. Those who bought this had nice things to say about it. One user simply stated "very sexy," another noted that they needed it for a film project that they were working on and noted Not as noticeable through clothing. The camel toe construction isn't stiff enough to be noticeable underpants or leggings. A third said it was a perfect fit.

It appears that some women are looking to obtain what experts call "designer vaginas." Nolan Karp, a plastic surgeon based in New York, shared his thoughts on how "Women have become much more concerned about the appearance of their genitalia. How many nude women, before the internet, would a woman see in her lifetime? Not many, you know, very carefully looking at... genitals." But people today "understand what is pretty, what is normal, what looks good, what doesn't look good", he said. Treatments and procedures could cost anywhere between $600 to $4,800, as well as requiring recovery time, so women are turning to a cheaper option in the form of fake camel toe panties. For those who aren't happy with their puffy crotches, there are camel toe concealers called Cuchini.  These are lightweight pads featuring double-sided tape to stick them to your panties. The insert conceals the appearance of any form of annoying vaginal wedgies. You can get one on Amazon here for about $20.

While there's a fine line between body positivity and giving in to body insecurities, if people want the product, companies will continue to sell them. Personally, we think confidence is the sexiest any woman (or man) can wear, but again, hey, each to their own. Here are some reactions from people online on what they think about camel toe undies.

@itismaYONNAISE Why would someone fake a fvcking camel toe? 😂😂

Please tell me you're lying about the ad, because I don't want to live in a world where that ad is real.

when you bout to fuck and you pull her pants down to see fake camel toe panties pic.twitter.com/VQTrKmKtE8