Koko the gorilla took many human-IQ tests in her lifetime and scored better than human counterparts of her age in many areas. 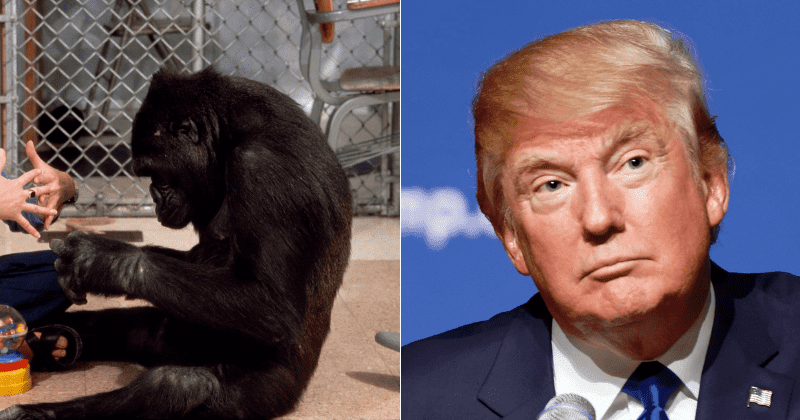 You may have heard this one too many times, but President Trump recently passed an assessment for markers of cognitive decline and spent a great deal of time bragging about it. In fact, the word was spreading all over the Internet that former president Barack Obama has not spoken about his Nobel Peace Prize achievement as much as Trump has on this online test. Still, to each their own. President Trump claimed that he took the test to silence the media but only ended up making the clamor surrounding the test louder. Ironically, the President was quite vocal on how well he did on the memory question, and yet he forgot the name of the test he took.

There are NO EXTRA POINTS on those tests!!!https://t.co/z52zSK2Gkl

President Trump also went on to state that his doctor was quite surprised that he passed the Alzheimer's test. He urged Democratic presidential candidate Joe Biden to take the same test and laid down several challenges for him. Needless to say, there has been a lot of talk about the test, and one bit of info that went viral last week was that a gorilla allegedly took and passed the same test that Trump did. A large primate named Koko was said to have passed the same cognitive tests that Trump has been bragging about, except the gorilla did it using sign language. When people came to know about this, they immediately started to suggest that Koko ought to be made President.

I doubt Koko took the Montreal Cognitive Assessment Test-MoCA (although Koko was undoubtedly smarter). The MoCA requires ability to provide verbal responses, repeat words and numbers, and several other cognitive tasks. Koko might have taken a Wechsler IQ test

The story of Koko the gorilla is a rather strange one. She was the subject of an experiment back in the 1970s where Stanford animal psychologist Dr. Francine "Penny" Patterson had the idea to see if she could teach an ape to talk. In 1971, she got to test it on a western lowland gorilla which was born at San Francisco Zoo, before being rejected by her mother. Patterson took the ape under her care for the next 46 years and taught her "Gorilla Sign Language" (GSL). Patterson reported that she taught the gorilla over 1,000 signs and the ape understands up to 2,000 English words. In 2018, Koko passed away and she was considered a truly amazing gorilla in her own right.

There’s a rumor that Koko, the gorilla who had a 2,000-word vocabulary, passed the Montreal Cognitive Assessment Test, as Trump may have.

The truth is that she performed like a 6-year-old human on a MORE difficult test— one that Trump would clearly fail.https://t.co/JLbNFrJ0Rd

While that is most impressive on its own, what about the claim that Koko took the cognitive test that Trump did and passed. Is it true? Well, as you might have guessed owing to it's viral and comical nature, fact-checkers deemed it false. The test that Trump took was called the Montreal Cognitive Assessment, which is a screening tool used for detecting mild cognitive impairment, particularly in a clinical setting, to help diagnose early Alzheimer's or dementia. You can take a closer look at the test here.

Koko was given several different tests during her upbringing and education. This particular test would have been rather inappropriate considering that it's meant to assess cognitive decline in humans.

Not literally true, but she did pass comparably difficult ones. https://t.co/3EXZC1suFP

"In some types of questions, Koko did better than human counterparts of her age. At age four-and-one-half, she scored better than the average child of six in her ability to discriminate between same and different, and in her ability to detect flaws in a series of incomplete or distorted drawings," Patterson wrote of Koko in her book The Education of Koko. "She astonished me with her ability to complete logical progressions like the Raven's Progressive Matrices test."

"Koko generally performed worse than children when a verbal rather than a pointing response was required. When tasks involved detailed drawings, such as penciling a path through a maze, or precise coordination, such as fitting puzzle pieces together. Koko’s performance was distinctly inferior to that of children," Patterson wrote.

Experts say Trump's fixation on the cognitive test he took is particularly puzzling because the test is normally administered only if someone is concerned that they or their loved ones may be experiencing dementia or other cognitive decline.https://t.co/gl1fRAl24J