Emmys 2019: See Who Won What, And The Best Moments From Television's Biggest Night

'Fleabag' swept up the awards, and several people used their speeches as a platform to highlight important issues. 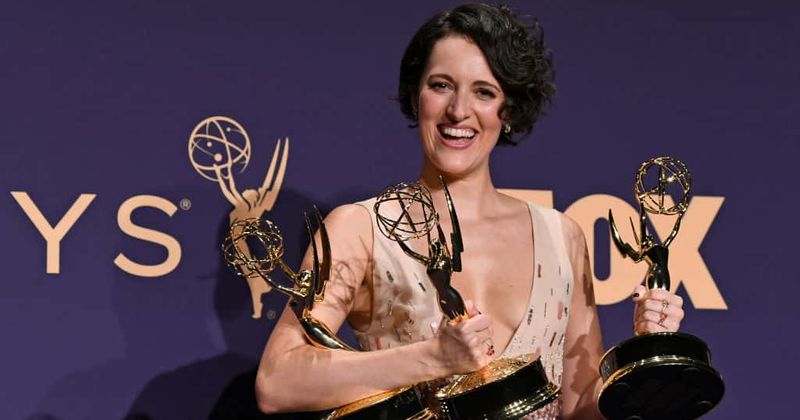 The 71st Emmy awards took place over the weekend, with highs, lows, and many, many well-deserving winners. The community bid goodbye to Game Of Thrones, which aired its final season this year, and won an Emmy for Outstanding Drama Series — one of only two Emmys the show won for its controversial final season, despite being nominated for 14. GoT star Peter Dinklage also received an award for his performance as Best Supporting Actor in a Drama Series, beating out castmates Nikolaj Coster-Waldau and Alfie Allen, among others. British show Fleabag was the night's big winner, claiming well-deserved awards for Outstanding Comedy Series, Outstanding Directing for a Comedy Series, and Outstanding Writing for a Comedy Series. Fleabag writer Phoebe Waller-Bridge also grabbed awards for Best Lead Actress in a Comedy Series. The award for Best Lead Actress in a Drama Series was won by Jodie Comer, who plays the delightful nihilistic assassin Villanelle in Killing Eve, also written by Waller-Bridge. The full list of awards and winners can be found here.

Congrats to our Fleabag family on their impressive wins tonight. 🏆#emmys pic.twitter.com/oePXyEnNoi

Billy Porter won the Best Lead Actor in a Drama Series award for his standout role as Pray Tell in Pose, making Emmy history as the first openly gay Black man to do so. "I have a right to be here. You have a right to be here. We all have a right," Porter said in his acceptance speech, drawing rapturous applause from the audience as he basked in the historic moment. Porter's Emmy also puts him just one Oscar award away from the much-sought-after EGOT title.

The 2019 edition of the Emmys made history on more than one note this year. Jharrel Jerome also became the first Afro-Latino to win an acting Emmy, taking home an award as Best Lead Actor in a Limited Series for his standout role in Ava DuVernay's When They See Us, the highly anticipated Netflix series about the five men falsely accused of rape, formerly referred to as the Central Park Five. “This is for the men we know as the Exonerated Five,” Jerome said as he accepted his award, while the now Exonerated Five raised their fists in solidarity from the audience.

The reaction to Jharrel Jerome winning an Emmy is so powerful. He deserves this and so much more for such an incredible performance. #WhenTheySeeUs

One of the most stirring moments of the night was via Patricia Arquette, who won the award for Best Supporting Actress in a Limited Series for her role in The Act, and promptly dedicated the award to her late sister, Alexis Arquette. Arquette used her speech to highlight Alexis, a trans actor and activist who passed away in 2016, and called for an end to the persecution of the transgender community. "I'm in mourning, Alexis, and I will be the rest of my life for you until we change the world, until trans people are not persecuted," Arquette said. "And give them jobs, They're human beings, let's give them jobs, let’s get rid of this bias that we have everywhere."

"I'm in mourning every day of my life." #TheAct's Patricia Arquette (@PattyArquette) talks about the passing of her sister Alexis Arquette and the persecution of trans people during her acceptance speech for lead actress in a limited series https://t.co/WmT1Fmyol4 #Emmys pic.twitter.com/E1iMULV5QV

Another standout moment from the night came courtesy of Michelle Williams, who won the award for Best Lead Actress in a Limited Series for her role in Fosse/Verdon. Williams used her acceptance speech to champion gender pay equality, having spoken about the issue publicly after the revelation that she was paid significantly less than costar Mark Wahlberg for the movie All the Money in the World. "My bosses never presumed to know better than I did about what I needed in order to do my job and honor Gwen Verdon," Williams said as she accepted her award.  "The next time a woman, and especially a woman of color – because she stands to make 52 cents on the dollar compared to her white male counterpart – tells you what she needs in order to do her job, listen to her."

"The next time a woman — and especially a woman of color, because she stands to make 52 cents on the dollar compared to her white male counterpart — tells you what she needs in order to do her job, listen to her, believe her." https://t.co/b7l53dgXH9